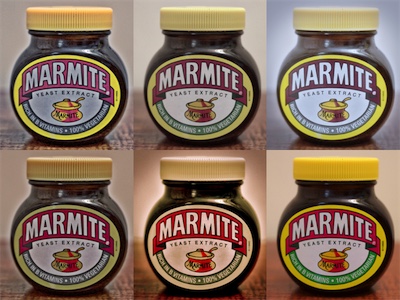 Ode to Marmite, spreading the love around

Love it or hate it, right? Either way, we take Marmite for granted. Like generations before me, I was brought up on the stuff. Virtually indestructible, an opened jar will last for years. However, it survives only a matter of days here at BD Mansions. It’s a product that genuinely tastes like no other. It has become the metaphor to describe polarised opinions. I’m spreading the love.

That iconic glass jar contains a lovely, thick, dark brown goo described as “yeast extract“. It gets its name from the French stockpot featured on the label (Le Marmite). It may look like crude oil, but it’s relatively healthy. Low fat and low sugar, high in added B vitamins and completely vegetarian. The only dietary drawback is that it’s high in salt.

It’s eco-friendly too. It comes from the spent brewer’s yeast left over after fermenting beer, a waste product. In 1902 the Marmite Food Company (owned by Unilever since 2000) was formed in Burton-on-Trent. Burton is the spiritual home of British brewing. They use the spent yeast from Bass. It’s a unique and genuine taste of British Heritage.

The factories break down this spent yeast to release soluble amino acids and proteins. After concentrating and filtering, it goes through a “top secret” process. The result is a basic yeast extract paste. Add vegetable and spice extracts and a range of vitamins, and hey, presto!

Down the years there have been some excellent marketing campaigns, including releases of various limited editions; based on yeasts from Guinness, Marston’s and even Champagne. Perhaps the most well-known of these was Ma’amite, celebrating the Queen’s Jubilee.

A squeezable version replaced the smallest 57g jar a few years back, which at the time seemed like heresy. The last of those tiny pots went on eBay for charity. It came in a commemorative RIP box complete with an authentication certificate!

Apparently,  25% of Brits take it with them when they go abroad, and that includes me. While it’s apparently available in 25 countries, I detest running out and keep an emergency pot in my toiletries bag!

There are many imitations. These all have different ingredients and, in my opinion, are a pale shadow of the real thing. Imagine my disappointment in New Zealand when I found a Kiwi version with sugar and caramel in it! In New Zealand, “Our Mate” is the brand name of the real thing because a rival owns the name. I’m also particularly wary of Vegemite and Promite, the hugely inferior Australian products.

So my advice for Marmite lovers abroad is to pack a jar or look out for British imports. Thankfully for me, there’s a shop in Milan where I can stock up in an emergency.

Then there’s Bovril, the arch-enemy. Bovril ditched the meat extract and reformulated it to be vegetarian some years ago. But its only use to me is a winter hand warmer in a freezing football stadium during half-time.

Obviously, Marmite is a classic on toast or with cheese sandwiches. It’s a standard addition to soups and casseroles, including my killer French Onion Soup. There are cookbooks devoted to it too, and Gary Rhodes includes it in his lofty cuisine. At his Michelin-starred restaurant Rhodes 24, he served a Marmite and chocolate sauce to pour over coffee ice cream.

Wine matches are, however, pretty difficult. Following along the lines of matching sweet and salt then Madeira works best for me. Alternatively, try a Marmite Bloody Mary instead.

You’ll not be surprised to find that I am a member of the Love Marmite fan club, and I follow them on Twitter. It doesn’t take much persuasion for me to wear my authentic Vivienne Westwood designed Marmite T-Shirt, catwalk watchers! And of course, there is also a Hate Marmite fan club, particularly useful as solace for long-suffering partners.

And the final word comes from the Edinburgh Fringe 2016. Roger Swift with the 12th best joke of 2016:

“I spotted a Marmite van on the motorway. It was heading yeastbound.”

For more foods that polarise opinion, see my piece on Brussels Sprouts!