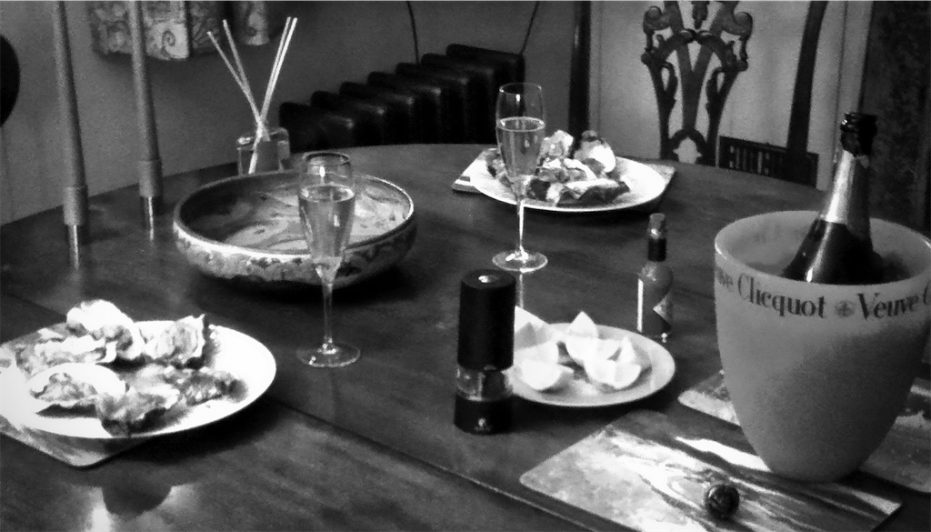 The world’s your Oyster

In Victorian times, the Oyster was food for the poor. They were harvested in abundance from around British shores and were cheap. Oysters are a good source of protein, especially valuable when meat is an expensive treat. Nowadays, the situation is very different – Oysters are an expensive delicacy, thanks to a combination of over-fishing and marine pollution. Sadly, many people have yet to experience the delight of a simple platter of fresh Oysters.

Like so many foods, they are an acquired taste. Just the thought of eating them raw remains deeply repellent to some, though if you enjoy other seafood, there should be little difficulty in getting to grips with them. While Jonathan Swift once remarked that “he was a bold man that first ate an oyster”, their slithery beauty has a unique taste most definitely worth acquiring! Many discover a lifelong enthusiasm for the mollusc and will choose Oysters in preference to any other item on a restaurant menu. I include myself in that category.

Oysters are at their best and most plentiful during the traditional British season that runs from September through to April. The adage was that Oysters should never be eaten during months not containing the letter “R”. This is partly because these warmer months are when the Oysters breed, but they also taste better when the sea is colder. Years ago, there would also have been a higher risk of spoilage in the warmer months. These days, Oysters are available all year thanks to refrigeration and imports.

In Ireland, Galway and Carlingford have their famous Oyster festivals where they’re swilled down with a pint or three of Guinness. Smaller festivals can also be found around British shores too.  The smallest Oysters are tastier and best eaten fresh; the larger ones are better cooked.

Oysters are also good for you. As well as being rich in protein, they also low in fat and calories. They contain significant amounts of zinc, calcium, iron, iodine, copper, magnesium and selenium. Legendary properties are also attributed: some believe that they are the Viagra of the sea. Whether they are an aphrodisiac is moot, but you might have fun finding out. As an aside, Oysters themselves can change gender several times during their lives! Those with allergies to shellfish or the immune-suppressed should avoid them. Oysters are a no-no during pregnancy.

The size, shape and flavour of Oysters vary considerably

The size, shape and flavour vary considerably according to where they are from and their species.

There are two main species available in Britain. The smaller, flatter and brownish Native, or European Oyster, takes five or more years to grow slowly to an edible size. They are pricier but also taste superior to the Rock, or Pacific Oyster. Rocks have a fluted and pointed shell, grey-blue colour, and a milder taste. Because these grow much more quickly, they are more plentiful and cheaper.

There are other species too. In New Zealand, the Kiwa (or Bluff Oyster) is a close relative of the European oyster, while the Atlantic Oyster (or Bluepoint) rules the Eastern seaboard of the USA, the Kumamoto Oyster is common on the West Coast.

Provenance is a major influence on the flavour too. Edible Oysters are creatures that inhabit estuaries and shallow coastal shelves, and filter their food from seawater, which itself varies in salinity, nutrients and temperature. As well as the difference in intensity of flavour between the species, oysters take on the taste of the local sea conditions where they live – truly, there is terroir in Oysters!

The best Oysters from British waters are said to be from Colchester (Essex), Whitstable (Kent) and Helford (Cornwall). However, other good sources are available in small quantities, including Welsh Oysters from Pembrokeshire and Scottish Oysters from Loch Fyne and Cumbrae. At Rick Stein’s Seafood Restaurant in Cornwall, you’ll find Oysters from Padstow and Fowey on the menu, while there are tasty examples from Lindisfarne and Dorset. Don’t look for pearls, though – they are found only in inedible deep-water species.

There’s also a varied range available from merchants such as Wright Brothers in London. A good restaurant, fishmonger or market will often have several types on offer – select a few of each and taste the differences between them. All should smell of nothing but fresh briny sea air. Some taste almost sweet and creamy, others have briny mineral flavours, while some can be nutty. The texture is soft and fleshy but fresh and crisp. Never swallow an Oyster whole, chewing brings out the taste!

Whether you choose Rocks or Natives, the classic way to serve them is au naturel – served on ice in their half shell. Allow for six per person as a starter, or twelve as a main course or for the avaricious. A squeeze of lemon is all that’s required, with perhaps some rye bread. However, adding stronger flavours can spice things up nicely too. Try a few drops of Tabasco or fresh Horseradish. The French classic is Mignonette, where finely chopped shallots are macerated for half an hour or so in red wine vinegar. Oriental sauces that contain soy and fresh ginger are excellent too. I also like them with Samphire.

If, like Woody Allen,  you prefer your Oysters dead, then there are splendid recipes, from Oysters Rockefeller to Beef and Oyster pie. My personal favourite is a Welsh recipe: melt Caerphilly cheese over a grilled oyster, served in the shell with Lava bread.

Like any seafood, raw oysters are safe to eat for the majority of us – be scrupulous about their provenance and freshness and follow these simple tips.

Oysters should be stored at a low temperature and smell briny-fresh. Their shells should be clean, tightly closed and unbroken. A good fishmonger or quality fish market is your best bet unless you live near the coast and can buy them straight off the boat. Personally speaking, I still have reservations about the ultimate freshness of Supermarket Oysters. Ideally, buy them on the day of consumption.

Unopened Oysters are still alive. You can keep them in the fridge, covered with a damp towel, for a couple of days – keep a check on them and discard any that open, as those will have died. Don’t store them in an airtight container or fresh water, as this will kill them. They can be frozen, though those are then best cooked.

Ten minutes before opening, bury the Oysters in ice in the freezer to make shucking them easier. Fresh Oysters must be alive just beforehand. A live Oyster will have a tightly closed shell. Tap any Oysters that are open – a live Oyster will close up and is safe to eat. Oysters which are open and do not close are dead, so discard those!

Take the Oyster and scrub it under cold running water. Now hold it so that the curved bottom shell is downward, with the flatter lid shell facing up. Wear gloves to avoid painful scrapes from the razor-sharp shells. Failing that, use an old towel wrapped around the Oyster.

Use a knife or a screwdriver with a short, thick blade. Insert it into the seam between the two halves of the shell as close to the hinge as possible and then push hard downwards. Once the knife is well inside, twist it through 90 degrees to break the muscle that holds the shell shut. Then work the knife along the opening until the top shell can be twisted off. During this process, keep the bottom shell level so none of the liquor spills out. Pick out any shards of shell. Discard any Oysters that are dry or smell. If you remain baffled, then take a look at this video.

Aficionados will invest in a specialist oyster Mitt and knife – worth the investment to avoid Shucking Hell.

Beers such as Guinness, Porter or IPA are excellent with Oysters, particularly if you are a Tabasco lover. But dry white wines are the perfect foil.

Oysters are a species that have been around for millions of years, and their fossilised shells are frequently a major component of Limestone and Chalk rocks. It is uncanny that bone-dry white wines grown on this type of geology seem to have a particular affinity with Oysters. Try the following wines with oysters and be amazed:

Also, Muscadet Sèvre et Maine sur Lie has no underlying chalk or limestone geology, yet those Loire wines have a leesy salinity that accentuates the Oysters’ minerality.  An ancient French grape making a comeback on the Languedoc coastline of southern France is Picpoul de Pinet, a dry high-acid citrusy wine. In Spain, Godello and Albariño are whites that match well, though Fino or Manzanilla Sherry is a vastly underrated and tangy match when served ice-cold. In the world of spirits, Gin, Tequila, Absinthe and Sake all have their followings.

I’ll leave the last words to Ernest Hemingway. “ I ate the oysters with their strong taste of the sea and their faint metallic taste that the cold white wine washed away, leaving only the sea taste and the succulent texture. And as I drank their cold liquid from each shell and washed it down with the crisp taste of the wine, I lost the empty feeling and began to be happy and to make plans.”

How about Pie and Mash and Jellied eels then?