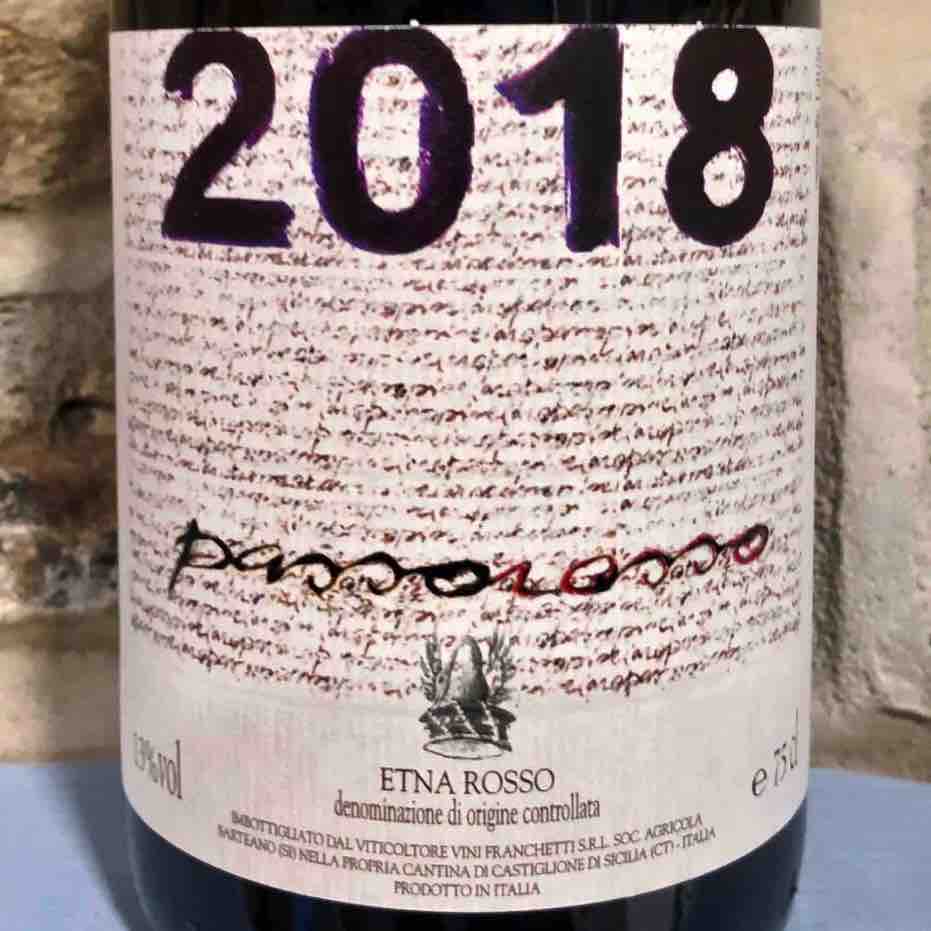 Mount Etna, while never quiescent, has recently had the most violent eruptions of the past fifty years, as this spectacular video shows. Yet as my previous articles about Etna demonstrate, this destructive power is also lifegiving. Today, Etna produces magnificent wines from its unique vineyards. Etna’s reputation has become re-established over the last twenty years, and it now ranks with Italy’s best. Indeed, Etna has become known as the Burgundy of the Mediterranean. What better way to connect to the drama of Etna’s current explosive activity than with the quintessential example of Etna’s red wine? This article is about Passorosso, made by Andrea Franchetti at Passopisciaro.

Etna’s unique terroir and grape varieties are discussed in more detail here. To recap, eruptions of lava and ash have created unique soils, but many vineyards were uneconomic and abandoned. Often these were ancient, on steep terraces. In some, bush vines somehow survived, many of them ungrafted centurions.

Meanwhile, Etna’s vineyards run clockwise in a broad arc around the volcano, from the north through east to south, occupying the steep contours and high altitudes on its flanks. As lava and ash decompose, they form soils that differ in age, minerals, texture, depth and coverage – and each eruption adds something new. Yet here, many different local and international grape varieties can thrive, and the greatest of them is Nerello Mascalese.

The Etna vineyard crescent subdivides into 133 Contrade. These are feudal plots of land, often with many different owners. The Contrade boundaries usually follow the natural landscape, and so each one has a unique mix of soils, minerals, altitude, aspect, exposure and slope. Consequently, many Contrade now make individual “Cru” wines, showing their names on the label.

Nerello Mascalese is the backbone of Etna Rosso DOC and many an Etna-based IGP. It’s hard to cultivate well in an already challenging landscape. However, it has that rare ability to communicate a distinct sense of place – just as Pinot Noir does in Burgundy or Nebbiolo does in Piemonte. Nerello Mascalese makes age-worthy structured wines that are aromatic and light in colour. The grape has no shortage of tannins or acidity, but it’s often combined with Nerello Cappuccio to compensate for lack of colour and fruit.

Nevertheless, when Etna marries a Contrade with Nerello Mascalese, a skilled winegrower has the raw materials to craft extraordinary and authentic wines. Enter Andrea Franchetti. 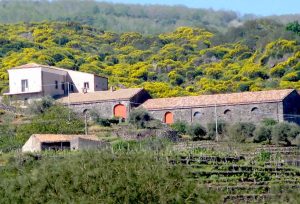 Andrea Franchetti was a pioneer of the Etna renaissance. Before arriving on Etna in 2000, he’d already created a famous wine estate from scratch. That’s Tenuta di Trinoro* in the Val d’Orcia of  Tuscany, a radically different proposition using only Bordeaux grape varieties grown on limestone. In contrast, Passopisciaro presented an opportunity to create excellence from abandoned vineyards and new plantings.

Franchetti’s first wine was in 2001, called Passopisciaro, made from 100% Nerello Mascalese. Nowadays, this is the wine known as Passorosso. A few years later, Franchetti introduced separate “Cru” bottlings of Nerello Mascalese, each from a different Contrade. Other Etna producers have followed suit.

The Passopisciaro estate is in the northern heartland that runs along the SP122, the old Roman road from Randazzo to Linguaglossa. The estate comprises a winery based in the Guardiola Contrada and five separate Contrade totalling 26 hectares. 20 ha are Nerello Mascalese, with 4 ha of Chardonnay and 2 ha of Petit Verdot and Cesanese. The altitudes of these different Contrade range from 550 to 1,000 metres. Viticulture is by necessity manual, and it’s also organic, with prevention of fungal diseases using natural organic remedies such as propolis (produced by honeybees), grapefruit seed extract, and clay.

At the top of the Passopisciaro estate above Contrada Guardiola is the solidified nose of the 1947 lava flow. It stopped just short of engulfing the vineyards below. It’s a reminder that on Etna, wine-growing is always high-risk. As Franchetti said, “You are conducting your viticulture on stuff that comes out of the terrible below.”

Passorosso, the original wine of the estate, is always 100% Nerello Mascalese, made from ungrafted vines 80-110 years old. So it’s a pure expression of Nerello Mascalese. Despite the introduction of  Contrade “Cru” wines here, it’s always a harmonious blend of different Contrade. Around 40% of it comes from Contrada Guardiola, the largest holding.

What a blend! While those Cru wines are celebrated expressions of a specific site, this blend seems to sum up Etna itself.

The Cru wines are all made in the same low-intervention way. Each undergoes fermentation in steel vats, followed by 18 months of maturation in sizeable inert oak barrels.  In recent vintages, Passorosso’s developmPassorosso’sslightly. It now gets ten months in a mix of large oak barrels and cement tanks. Then, after blending, there’s a further six months of maturation in the bottle. All the wines are unfiltered, and bottling is done on a waning moon when the lees are at their most settled.

As far as vintages are concerned, 2018 is the latest release. It was a challenging year in being unusually wet and humid, so its character is lighter and firmer when compared to the heatwaves of 2017. Hence only 35,000 bottles were made in 2018 compared to 60,000 in 2017. But these are different vintage expressions rather than the wine of one year being better than the other.

Tasting – A Journey to the centre of the Earth

To quote from Jules Verne, in  Journey to the Centre of the Earth, “I looked on, I thought, I reflected, I admired!”

This 2018 is a young wine. Decanted for an hour, it opens up in the glass over the next twenty minutes. Pale ruby-red, complex rose, red berries, ash, and sandalwood aromas. There’s plenty of acidity and tannin, but those are in a harmonious balance with the fruit weight and the moderate alcohol. The alcohol is less in this vintage, and the wine is leaner and more grippy, reflecting a wetter year. However, that balance keeps it agile and poised. The palate has sour cherry fruit, with hints of orange, sandalwood, black olives, and a savoury balsamic undertow.  A bright iron-like streak then slowly fades on a long finish. Drinking now, with another year or so to peak then and will hold for a decade.

Comparisons with Burgundy are there for the taking: it comes in a Burgundy-shaped bottle, the colour, amount of aroma, complexity, precision and elegance all recall Burgundy in style, though the specific scents and flavour profile is pure Etna.

Passorosso is a versatile wine that matches many dishes, from Cucina Povera’s simplicity to Michelin-starred extravagance. Try well-charred grilled chicken, pork and lamb, aubergines and mushrooms and tomato-based pasta sauces. But, of course, if you’d like a recipe, it has to be an authentic Spaghetti alla Norma.

The UK importers are Corney and Barrow, which also stock the other Franchetti wines. Passorosso is also available from various independent merchants. This new 2018 vintage is currently at AG Wines at £34.39 and Tannico at £29.82.

Franchetti’s Contrade wines offer greater individuality than Passorosso. They are superior, rarer and more expensive too. However, they need Passorosso as a primary yardstick to fully appreciate them. Being a blend, Passorosso has the alternate advantage of combining the best characteristics of each Contrade. In short, Passorosso is one of Etna’s most remarkable, memorable and pleasurable wines. 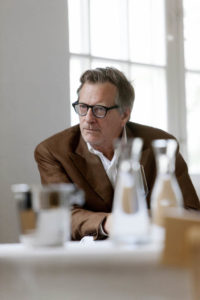 With great sadness, I learned of Andrea Franchetti’s death yesterday evening at his home in Rome after a long illness.

Winegrower and pioneer; non-conformist and visionary.

Let this article stand as a humble tribute to him.