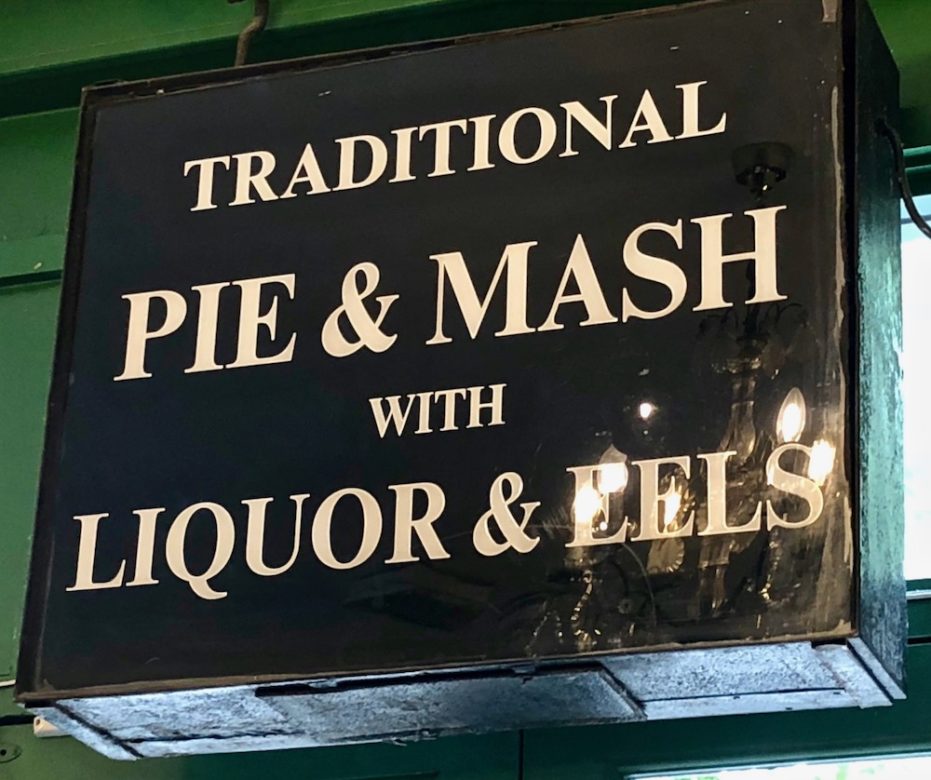 Pie and Mash – an authentic taste of London

While I live ever more distant from my London birthplace, that doesn’t wholly quell its siren call. There are many things I don’t miss, but one thing I do is Pie and Mash, proper London food. There is, sadly, an ever-dwindling collection of emporia in London in which to eat it. So much so that this culinary and cultural delight is becoming an endangered species.

Before the second world war, there were hundreds of these shops, many managing to survive through the blitz. But in the past couple of decades, tastes and economics have changed out of all recognition. According to the Pie and Mash Club, there were still 57 Pie and Mash shops within London in 1995, but only 27 remained in 2017. Since then, the pandemic may well have forced a few more to close for good.

Pie and Mash comprise a freshly baked beef pie, preferably served upside down, with a scoop of mashed potato on the side, all coated with a ladle-full of green parsley sauce. But this meal is so much more than the mere sum of those constituent parts. As we’ll see, both the meal and the shops are special. Everything is usually made fresh on the premises, and the interiors are frequently minor works of art. For generations, many have been family-run, some dating back to Victorian and Edwardian times and a bygone age.

In Georgian London, street vendors called piemen sold eels and eel pies to workers from mobile carts. It was principally in East London, the home of working-class immigrant communities employed in the docks and heavy industry, north and south of the River Thames.

Henry Blanchard on Union Street opened the first documented pie shop in Southwark in 1844 for eel pies. However, Robert Cooke, pie-entrepreneur, is often credited with establishing Pie and Mash as we know it, with his first shop opening on Brick Lane in 1862. He and his family founded a chain of successful shops in London, as did other dynastic pie-families with immigrant roots, such as Manze’s and Kelly’s.

Most Pie and Mash shops became widely established in the north and south of east London. However, there were far fewer in the more affluent west, apart from those based at day-tripper destinations. It’s where Eel Pie Island in Twickenham gets its name, which of course, became famous later for its music scene.

Pie and Mash was always part of my life. My Mum used to take me to L. Manze’s on Walthamstow High Street in the mid-sixties. It was always exciting, even if the main reasons were the journey on the top deck of a Routemaster bus and the possibility of a new toy. Typically unassuming from the outside, that particular shop became Grade II listed by Historic England in 2013, principally for the original interior.

Meanwhile, my Dad would bring Pie and Mash and Jellied Eels home after work from Cooke’s on Broadgate Market. A little later in my life, another Cooke’s was frequented, this time out west in Goldhawk Road, which appeared in the film Quadrophenia. Trying to pogo down at the Hammersmith Palais after eating a plateful there wasn’t advisable.

Decades later, M. Manze’s in Chapel Market, Islington provided a regular lunchtime business treat and was conveniently close to King’s Cross for the homeward journey north. This shop also appeared in a film. That was The London Nobody Knows starred James Mason in 1969. Sadly, that place closed pre-pandemic after 106 years of trading. Like so many others, it was a victim of gentrification, soaring costs and the ubiquitous international chicken and burger chains. 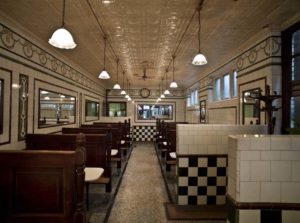 One of the joys of eating-in is that many shops retain their Victorian and Edwardian interiors, designed to be easily kept spotlessly clean. Though each shop is different, brick-shaped glossy tiles are a unifying theme, in lustrous white and green encaustic patterns, with embedded mirrors and tiled friezes.

On one side of the dining area will be the all-important zinc counter. Order and wait to collect, then find somewhere to sit. Tables often have bench seating for six, fixed to the wall at one end. Some tabletops and floors are marble, others wood. And with the all-important kitchen at the back, these places are always warm and cosy in winter!

The outsides of the shops are generally fairly plain. However, look out for exteriors with opening windows or hatches – they were not there for ventilation; they are separate openings for ordering takeaways. 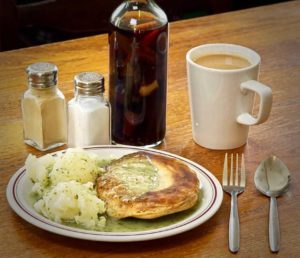 A “one and two” at Goddard’s

Pie and Mash make a substantial meal. It was necessary when heavy manual work needed hearty, nourishing and affordable food. So pay attention to how much you order.

There’s a shorthand in ordering Pie and Mash, and using it will make you sound like a seasoned pro. A “one and one” is one pie and one scoop of Mash, while a “two and one” is two pies and one spoon. Hence there are “one and two” and “two and two” combos. Be warned; a two and two is a mighty plateful, and I’ve never seen a “three and three”!

The minced beef pies are usually hand made and baked on the premises that day, often featuring “secret” recipes handed down the generations. For example, there are no preservatives or other filler in the filling, while the cold water pastry case uses two types of pastry and gives contrasting textures; short and flaky on top, while the sides and bottom are soft suet. That’s why the pie should come upside down on the plate, with the firmer flaky pastry in the parsley sauce.

Mashed potato is straightforward enough, though the best purveyors only mash the potatoes to order, meaning they come fresh and hot.

Now for the green parsley sauce. It’s called liquor. Add a little or a lot to taste. The crucial, often unnamed, element in the sauce is eel liquor. Pie and Mash inhabit the same culinary and cultural space as Jellied Eels and eel pies, more traditional foods on the wane. Eels are now a rarity in London rivers, and most of them come in from Northern Ireland or the Netherlands.

I always disliked Jellied Eels (what an admission, just what kind of Londoner am I, a disappointment to both parents). However, the jellying process creates a stock, the eel liquor, a vital addition to the parsley sauce, which brings a distinctive savoury tang. Unfortunately, this eel stock isn’t used in every establishment these days, more’s the pity.

And I recall the abundance of eels in various markets in north London, particularly Walthamstow. The eels were alive in buckets of water,  slithering and coiling until purchased and despatched. Occasionally, one of them would make a desperate bid to escape. It’s doubtful that any were successful. 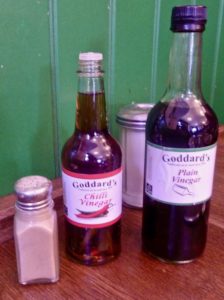 Now for the condiments. Malt vinegar, hot chilli-vinegar and white pepper are the essentials. Salt if you want. Don’t be tempted by brown sauce or mustard (much as I love them). Please avoid the twin evils of Ketchup and non-brewed condiments at all costs.

Some modern dietary concessions are necessary to preserve the Pie and Mash tradition and attract a broader audience. These include the availability of organic, vegetarian and vegan pies, alternative fillings to beef, gluten-free options, and (whisper it) gravy.

And what about chips? By now, you may have noticed that one of Pie and Mash’s defining features is that there is nothing fried. Although, of course, some shops do serve chips. However, in my opinion, if you want chips, go to a Fish and Chip shop. Still, as long as you can get the real deal on the menu in these days of choice, fair enough.

Pie and Mash is real food with a unique cultural history. So it’s about time there was a Slow Food Praesidium to help protect it.

And what should you drink to wash down this fine repast? Builder’s Tea is the number one choice, served scalding hot from a giant urn in a big mug. Preferably strong enough to stand a spoon up in it. Never coffee. For soft drinks, try lemonade. A craft ale might slip down well in these microbrewery days. As for wine, leave it out. 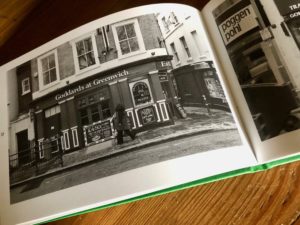 Whenever in London, finding a Pie and Mash Shop is a pilgrimage, and I’ve got the tee-shirt. But, unfortunately, I can’t claim to have visited them all, and they continue to close at such an alarming rate that there’s plenty I never got to.

More survive outside London, mainly in Essex and Kent, following the diaspora of many Londoners. I was even blessed with a good one in far-flung Skipton, North Yorkshire, though the pandemic seems to have done for it. And while there have always been takeaways and tempting UK wide deliveries, eating in the shop is an integral part of the experience.

Please seek a Pie and Mash shop out and try it for yourself. Here’s a link to a handy map to guide you to the survivors, courtesy of the Pie and Mash Club. Of course, I can’t promise you’ll become a convert, but if you go, there’s an authentic Happy Meal and a genuine taste of London waiting.

Then if you get into it, you’ll like this book of Pie and Mash Shop photographs.

When returning to London post-pandemic, my first stop will be at a Pie and Mash shop. Either Goddard’s at Greenwich, around the corner from the Cutty Sark. Or M. Manze in Bermondsey, now the oldest surviving shop and ideal for visiting Borough Market.

Either way, I’ll be ordering a two and two!

Oysters have a similar history. Find out more about them here.