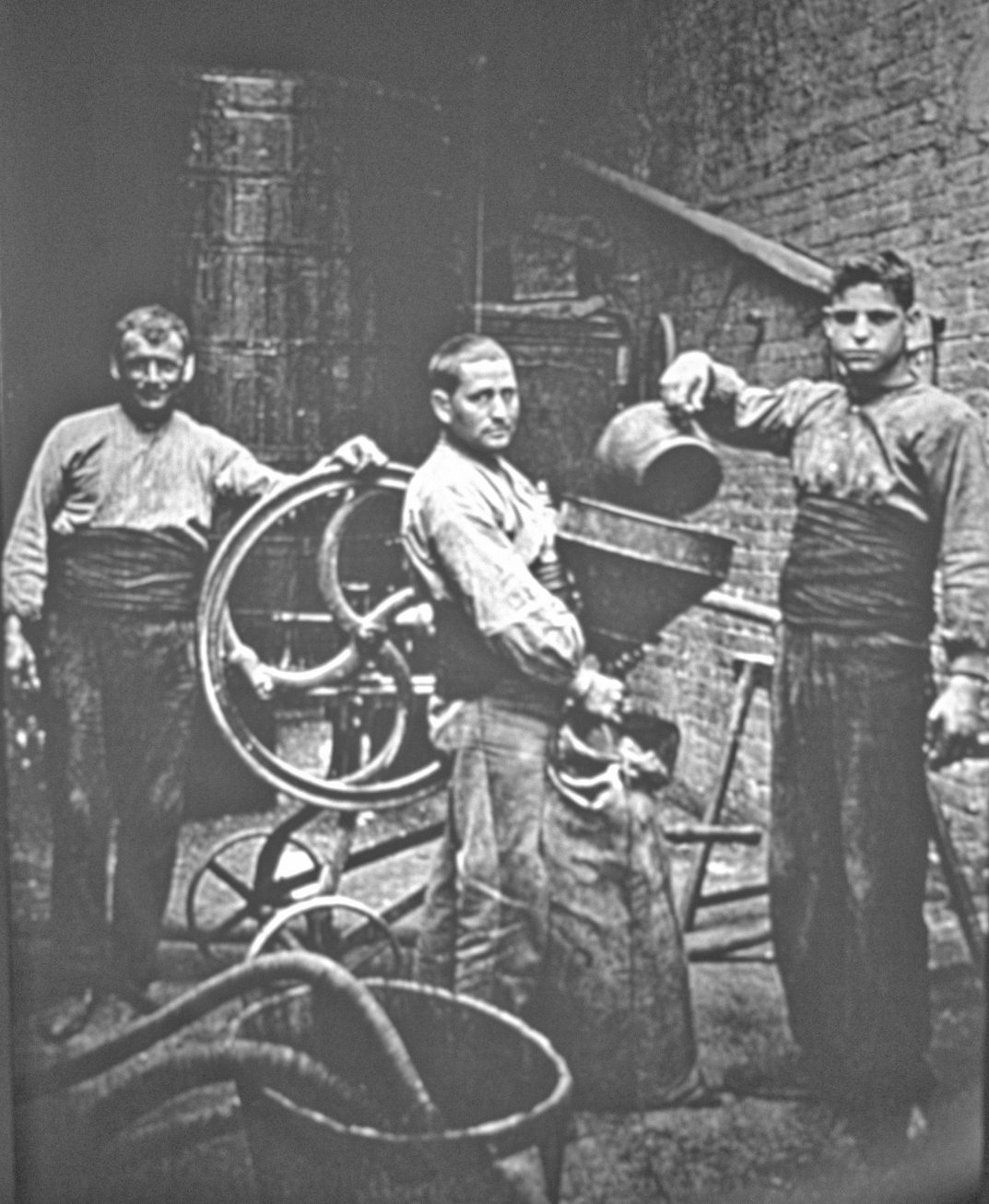 These days, Pla de Bages is a relatively obscure Spanish wine region in the heart of Catalonia, Spain. Yet winegrowing has been here since Roman times, and the word Bages comes from Bacchus, the Roman God of wine. North-west of Barçelona, this fascinating region occupies the valleys of two rivers, the Llobregat and the Cardener. These rivers meet just south of Manresa, the largest town in the area, surrounded by the rugged limestone mountains of the Catalonia Geopark. Here, the microclimate is a harsher continental style of torrid summers and freezing winters. Wine-wise, the warmer sites benefit red grapes, while the cooler ones, often at a higher altitude, are ideal for whites. But, of course, there are also sparkling wines here too, made under the Cava DO.

This area also has a 10,000-hectare natural park to explore, the Parc Natural de Sant Llorenç del Munt I l’Obac. The countryside feels remote, far from the hustle of Barça. Yet it’s easily reached, being under an hour away from there by car, or ninety minutes by scenic train.

Pla de Bages is also the smallest of Catalonia’s twelve wine regions, with less than 600 hectares of vines. It finally won its DO (Denominación de Origen) in 1995.  Yet, in its heyday a century ago, this wine land was booming. Then, it had 27,700 hectares of vineyards supplying insatiable wine markets in Barçelona and across the Pyrénées in France.

So what on earth happened?

Many wine lovers will know of Phylloxera. For those that don’t, here’s a short resume. The first outbreak was in 1863 at Roquemaure in the Rhône Valley in France. The vineyards suddenly began to wither and died rapidly, cause unknown. It was due to a microscopic American insect attacking the plants’ roots, which became known as Phylloxera vastatrix.

Phylloxera came to Europe on infested wild American grapevines imported by botanists and collectors. Those vines are a different species compared to the European species used for winemaking. Eventually, it turned out that the American vines had evolved a natural resistance to the insect, but unfortunately, the European species Vitis vinifera had none. Hence the insect spread remorselessly, rapidly destroying any vines in its path, with no remedy.

In 1874 the French government offered a prize of 300,000 francs for a practical cure. Many were tried, often using dangerous chemicals, without any success. Nevertheless, by 1894, Phylloxera was throughout France and had spread worldwide. For example, it reached Italy in 1875, Australia in 1877 and New Zealand in 1885.

Finally, after years of argument and denial, there was a breakthrough. The solution was to graft the upper grape-bearing part of the European vine onto the resistant American roots. Replanting with such grafted vines finally saved the day. Unfortunately, Phylloxera is endemic in 99%+ of the world’s vineyards, and grafted vines remain necessary. Only a few isolated pockets have survived without this infestation.

Meanwhile, the onset of Phylloxera in France caused a gold rush in Pla de Bages. At the peak, France had 2.5 million hectares of vineyards in ruin. So it had to look elsewhere for its wine supplies, especially of the cheaper sort. The scale of French devastation remains incredible. Their wine production fell from 84.5 million hectolitres in 1875 to just 23.4 million hectolitres in 1889. By 1882, the amount of wine from Spain and Portugal coming into Bordeaux was twice as much as that going out.

Nearby Catalonia, somewhat protected by the natural barrier of the Pyrénées, had wine and accessible transport routes. As demand for Pla de Bages wines grew, the vineyard area expanded into isolated and challenging terrain from the flat plain (the Pla).

Then came the crash. In 1889, Phylloxera reached Catalonia, and by 1895 it was entirely infected. The result was inevitable.

Pla de Bages also had a legal sharecropping contract between the farm owner and peasant worker called Rabassa Morta, which had medieval origins. Under this, peasant farmers leased the vineyard land from the owner. Crucially, the lease ceased if two-thirds of the vines died. That clause ensured the peasant farmers looked after the vineyards at their own expense. However, as Phylloxera spread, so those contracts quickly ended. It was often uneconomic to replant, especially in the most challenging areas. So the farmers and their families moved away, finding ready alternative employment in the booming textile mills and other industries. 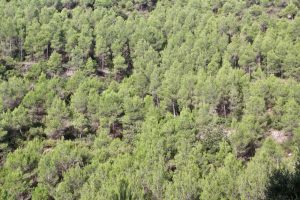 In Pla de Bages, those remote sites quickly became lost in a sea of rewilding forests. The remains of viticulture – such as dry stone walls, terraces, shelter huts, and wine vats – were hidden from the casual eye by a green forest inhabited by Wild Boar and Deer.

Phylloxera didn’t end winegrowing in Pla de Bages, but it hastened its decline. By 1989 there were only 500 hectares left.  And so it was that Pla de Bages shrank into obscurity.

Fortunately, that wasn’t the end. Thanks to a great deal of hard work by DO member wineries, Pla de Bages has received increased recognition, both for the quality of its wines and its heritage. One aspect of this is the rediscovery of local grape varieties. Another is its unique dry-stone wine vats, known as Tines. 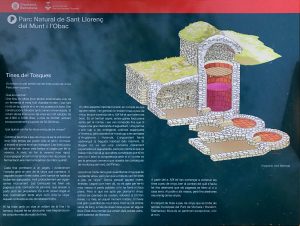 Tines first appeared in Pla de Bages in the sixteenth century. These had glazed ceramic linings, with stone roofs covered in earth. At the top were wooden planks, and this is where the grapes were received and then foot-pressed. The juice, plus stalks and crushed grape skins, would fall to the bottom. After natural fermentation (with no means of temperature control), the wine drained off through the boixa, a stone with a plugged hole. The boixa was inside a small locked hut, designed to prevent a whole year’s work from being stolen.

In the remoter parts of the Bages region, transporting grapes to the farmhouse was hindered by the considerable distance and rugged terrain. Consequently, these vats were built in the remote vineyards rather than centrally at the farmhouse. They were usually on a hillslope, where it was easy to deposit the grapes at the top and drain the wine from the bottom. Think that gravity-fed wineries are something modern? Think again! 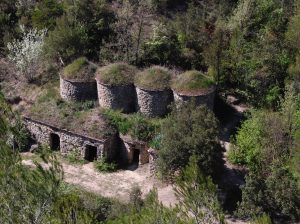 By fermenting in the vineyard, only the finished wine needed to be transported by wineskins on mules, which was more efficient and cheaper. It’s unlikely that the tines vinified red and white grapes separately, let alone different varieties. Some examples possess more than one vat (with, two, four, and eleven). It’s thought they were built collectively by peasant farmers sharing the work between them.

It seems incredible that many Tines have only recently been rediscovered, catalogued, and protected. Yet, there are one hundred and eighty of them in the region. They are unique in the world and so represent an incredible cultural heritage. I’ve heard there are plans to re-employ a Tine or two for experimental winemaking, and I’d love to taste the result!

Some of the best examples of the Tines are along an easy 6 km route along the beautiful Flequer valley of the natural park, with ever-present scents of rosemary and thyme. The destination is the wine vats called Tines del Tosques. It can be a guided or self-guided walk. Or on horseback, if that’s your thing. So take water, a couple of bottles of DO wine, and a picnic for a splendid day out.

In my opinion, the Tines of Pla de Bages are as crucial for Catalunyan wine heritage as the Amphorae are for the wines of Georgia.

There are fifteen wineries in the Pla de Bages DO, making wines from very good to outstanding. These wineries are on the clickable Google map below.

The good news is that there are some brilliant DO Pla de Bages wines available in the UK.

Here are four excellent DO wines to try.

Abadal can trace its roots back to 1199, over 35 generations of the Roquetta family. With 70 hectares today farmed sustainably, they were one of the last to succumb to Phylloxera. As a result, Abadal has been in the vanguard for rediscovering local grape varieties. Indeed, Picapoll Blanco can now be considered the white signature of this land. Some maintain that it’s the Piquepoul of southern France. Though this isn’t the case, it may be related to Clairette.

On this evidence, Picapoll is of far higher quality than both of those. It’s made a real comeback, and this brilliant example from Abadal was the first 100% Picapoll to come to market. Made in stainless steel and given three months lees ageing, with no malolactic fermentation. Pale gold has peach and herb aromatics, creamy yet fresh texture, and a tangy citrus persistency, with hints of fennel. Super wine and great value. Try it with creamy cheeses, seafood, and crab. Martinez  £14.99

Again from Abadal, Franc is a red blend, of  50% Cabernet Franc, 40% Tempranillo, and 10% Sumoll, given four months maturation in old French oak.  Made for young drinking, it’s mid-ruby in colour with a darker violet rim. There are aromas of Cab Franc’s pencil shavings along with cherry and red berries. Smashing fresh acidity means this is a dangerously quaffable and versatile red. Ideal with salami and with the irresistible Pa Amb Tomaquet (Catalan bread rubbed with tomato). Martinez  £11.99

Exibis is a red biodynamic blend of 60% Cabernet Sauvignon with 20% Mandó and 20% Sumoll, the latter two being rare local red varieties. Foot trod and then fermented in stainless steel, it sees no oak and is for young drinking. The Sumoll contributes acidity and plummy flavours, while Mandó adds tannin and spicy notes. The Cabernet is ripe, offering herbal notes. A vibrant, mid-ruby wine with aromatic red berry fruit and a balsamic note on the palate. More Pa Amb Tomaquet!  N/A UK

Oller del Mas is a certified organic producer with 60 hectares of vines. Arnau Oller is their flagship, with less than 5,000 bottles made, awarded Vi de Finca, essentially meaning a single vineyard with a consistent reputation for excellence. It’s 90% Merlot with 10% Picapoll Negre, fermented in stainless steel with only free-run (no press) juice. It’s then given twelve months maturation in new French Allier oak barriques before a further twelve months in bottle.

A low-sulphur wine, it’s dark and brooding, big and velvety, without any edges. Red fruit aromatics cut with violets and lavender. Then plummy flavours with balsamic, rosemary and spice complexity. A long finish has a touch of alcoholic warmth, so this is a wine for the deep midwinter. While drinking well now, it will improve if kept longer. If you like the big reds of nearby DOCa Priorato, you’ll love this style, and at a fraction of the price. Big hearty meals are essential.  N/A UK

Once almost forgotten, Pla de Bages is emerging as a centre for quality wine, gastronomy, culture and a range of outdoor activities. That makes it an important place to spend some quality time. If you would like to find out more, then for starters, take a look here.

It’s an oasis of calm too, best enjoyed in Spring and Autumn. I hope to return and attend their vintage festival, held each October. Until then, Salud!

*There are some compelling parallels between Phylloxera and our current nemesis, Covid-19. Those wanting to discover more about the Phylloxera story should check out Phylloxera by Christy Campbell.