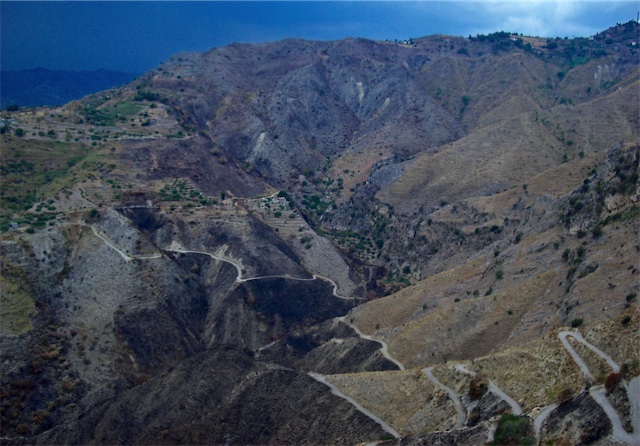 This fabulous wine comes from north-east coastal Sicily, on steep volcanic slopes between the towns of Messina and Taormina. It is called Faro after the lighthouse that guards the entrance to Messina’s harbour. Beyond are the narrow, dangerous straights of Messina separating Sicily from mainland Italy. Faro is a shining light indeed.

Faro DOC was on the brink of extinction

Winemaking here dates back to antiquity, thousands of years before a wine called Mammertino was enjoyed by Julius Caesar. Extensive vineyards existed in these parts right up until the nineteenth century, until wiped out by Phylloxera. The remnants fell into steady decline and by the 1970’s they were on the brink of extinction. Faro obtained a DOC in 1976, one of Italy’s smallest at just 6 hectares – but nobody made it!

Salvatore Geraci of Palari decided to produce a DOC Faro wine to avoid the revocation of the DOC. In so doing. Palari rescued the DOC from oblivion and inspired a new generation of wine producers. The region’s wine heritage is now secure.

Since the first vintage was released in 1994, Gambero Rosso has awarded it the coveted Tre Bicchiere virtually every year. It’s as iconic and delicious as any Italian wine from Piemonte, Tuscany or the Veneto. Also comparable perhaps to the finest red Burgundy or Barolo, it is unique. In short, Faro is a wine of complexity and grace,

Faro is a blend of local grape varieties; the most important being Nerello Mascalese. Some of the others used were on the verge of extinction, including Nocera, Acitana, Tignolino and Nerello Cappuccio. Only tiny yields come from these ancient gnarled bush vines. The vines grow on volcanic terraces at around 450 metres altitude. The climate here has cooling sea-borne winds and considerable diurnal variation that moderate an otherwise extreme terroir.

Only the very best portion of the small harvest goes into Faro; the rest used in Palari’s second wine, Rosso di Soprano. Faro matures for twelve months in French oak and then for a further twelve months in bottle.

Decant Faro two hours before serving. The colour is delicate, the palest garnet, and could easily be mistaken for a Burgundian Pinot. A perfume leaps from the glass, subtle yet expressive. A mixture of kirsch laced with a gamey, almost farmyard, quality and hints of dark chocolate.

I would describe the seductive palate as gamine. Diminutive and slender, austere rather than voluptuous. Raspberry and cherry fruit balances cool acidity and silken tannins. As it develops in the glass something darker appears. It’s a savoury quality leading to a long finish characterised by the gentlest oak-spice and iron-like minerality. This wine is all about seamless grace and elegance, with just the merest warmth. There’s something recognisably Italian disegnare about it.

Consequently, Palari has created an extraordinary and adorable wine. Burgundian food such as Duck or Game would match well. A vegetarian Italian alternative – Roasted Aubergines sprinkled with Goat’s Cheese and herbs – works a treat.

As it ages, it can also be a wine of contemplation. I treasure my memories of reading The Leopard by Tomasi di Lampedusa with a glass of 1998 in hand. Actually, several glasses!

£42.49 from AG Wines. Yes, not cheap. But given the often stratospheric prices of icon wines from Piedmont, Tuscany and the Veneto, Faro is good value. That may be out of reach of your wallet. So try the second wine of the estate, Rosso di Soprano, £23.99 from the same source.

If you found this piece interesting then read my articles about nearby Mount Etna.