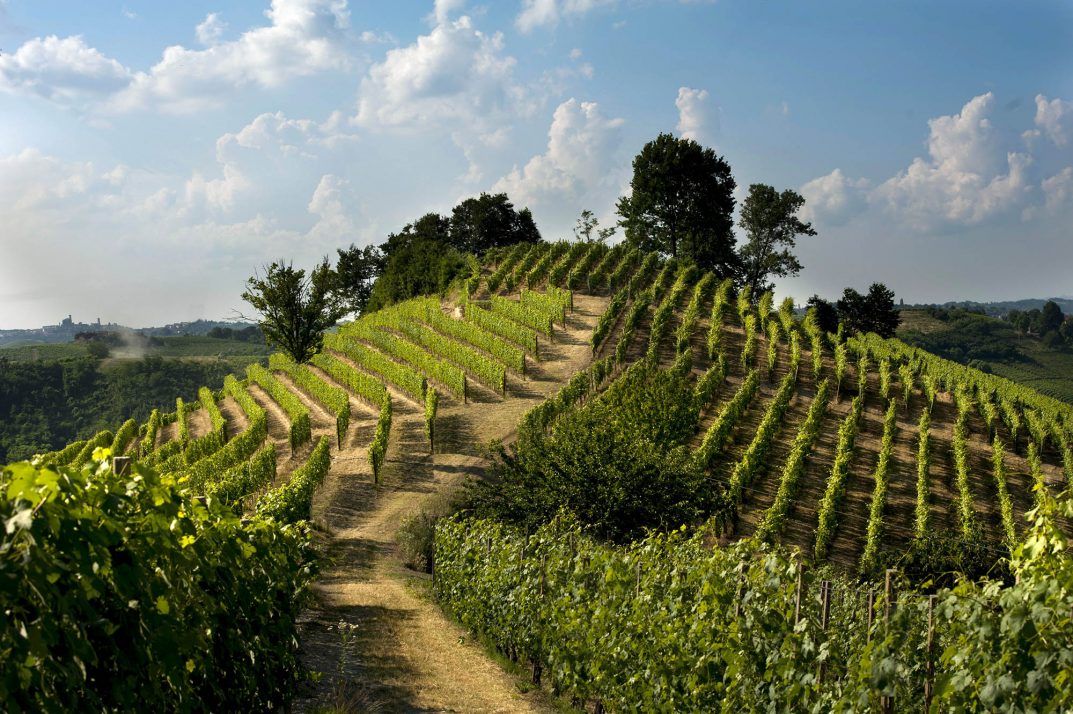 Roero – white and red wines in my Glass

The Roero DOCG region is on the northern (left bank) side of the Tanaro river in Piemonte. This river divides Roero from the likes of Barolo and Barbaresco on its southern side. Roero’s territory isn’t a monoculture; while vines have been grown here since Etruscan times, the 1,180 hectares of vineyards coexist with orchards, forests and arable farming. Unusually, the Roero DOCG has two different wines, one white and one red.

The white comes from 907 hectares of Arneis, known as Roero Arneis, while the red comes from 273 hectares of Nebbiolo, known just as Roero. Both grapes are challenging, but both can achieve spectacular results in the right place and in the right hands. The DOCG excludes inappropriate sites such as flat land and valley floors, while the maximum altitude is 400 metres. Meanwhile, Arneis, once nearly extinct, has become fashionable, while Nebbiolo surely needs no introduction.

The geology of Roero dates back 130 million years. Then it was a sea bed with deposits of sands, gravels and marine clays. After being uplifted 2-3 million years ago, the soft limestone and sandstone hills eroded quickly. Then there was a dramatic shift in the course of the Tanaro river to its present-day channel some 250,000 years ago. Hence the soils that exist today in Roero are chaotically varied but share the properties of being loose and free-draining. They lack organic matter and cannot store water for long. They are also rich in minerals such as gypsum, formed by the evaporation of seawater. Some areas were beaches, and their fossil shells frequent many soil profiles.

Climatically, rainfall is low and is mainly in October-January. It’s also warmer than Barolo and Barbaresco, while the nearby Alps mean that hailstorms are a summer risk. Consequently, Roero is semi-arid, and its hills are almost totally devoid of water: the landscape is scattered with cisterns to collect rainwater or wells to draw from deep aquifers.

A Consorzio zoning project resulted in 135 MeGA’s (Additional Geographical Mentions), covering 50% of the vineyard area. Each one must have three growers and includes only the top and middle hill slopes. These sites are the best “Crus”, where wines can add their names to the label. You can see a map of these here. These Crus will gradually become known for their characteristics over the coming years.

To generalise, the best places for Arneis are often on the colder north-facing slopes or hilltops of this hilly terrain, leaving the warmer south-facing slopes to Nebbiolo. Many vineyards are extraordinarily steep, offering protection but precluding mechanisation.

Roero Arneis DOCG uses the Arneis grape variety, a high-quality white grape rescued from extinction. The story of Arneis is in a previous article.  While Arneis is now grown in other parts of Piemonte, it’s most characterful and widespread in Roero. The minimum ageing for the wine is four months, with a Riserva level at 16 months. It also allows for a Roero Arneis Spumante, Metodo Classico, and ranges from dry to sweet. All Roero Arneis must be at least 95%, and in practice, most are 100%. Roero Arneis is a dry wine, excellent when young but ages well over 4-5 years. Don’t overchill them; you’ll miss the nuances that the wines can offer.

Roero DOCG is from Nebbiolo. The minimum ageing is 20 months (including a mandatory six months in wood). The Riserva level stipulates 32 months (of which six must be in wood). Again, the wines must be a minimum of 95%, and most are 100%.   Roero is an excellent source of high-quality Nebbiolo wines with no shortage of fragrance, finesse and elegance. Thanks to the sandy soils, the tannins are less marked in Roero than in neighbouring Barolo and Barbaresco, so these wines can be enjoyed younger but still have the capacity to age. Always consider decanting to aerate young wines or remove possible sediment from older ones. 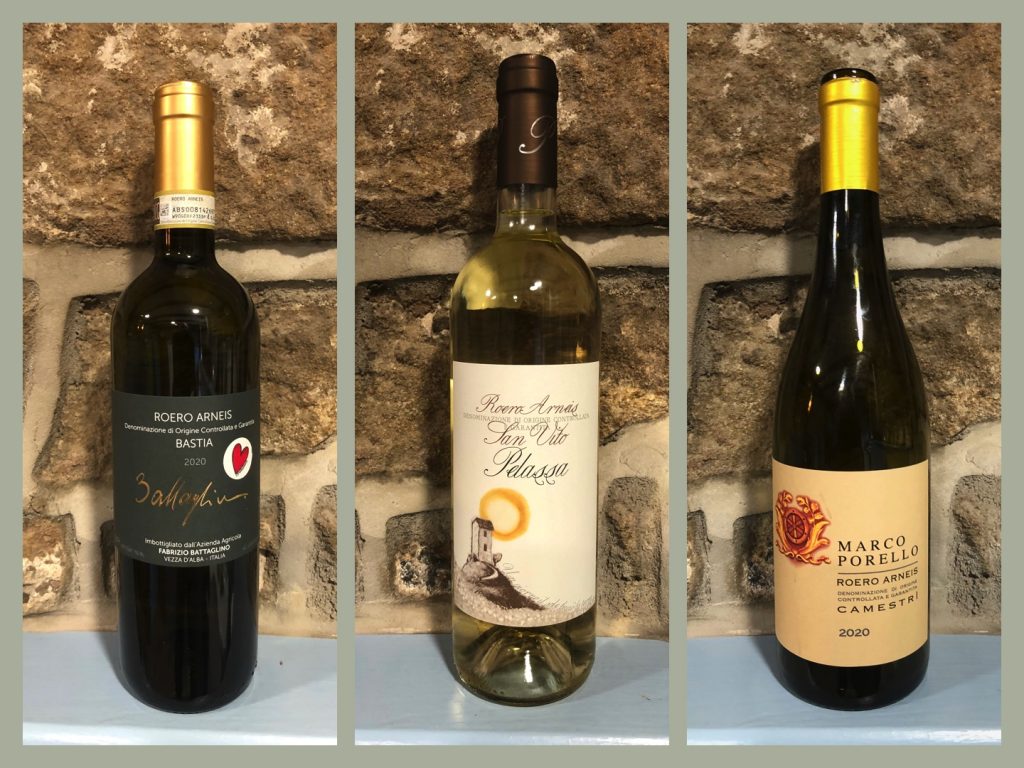 100% Arneis from a 5-hectare single vineyard on the Bastia hill in the central part of the DOCG. Attractive grassy aromas with apricot and pear. The pear fruit reprises on the palate with a slippery texture and mineral streak before a dry finish. An elegant example that will improve with some bottle age as minerality develops. Try it with seafood. Ideal with a Primavera risotto featuring lots of asparagus. £13.20 from The Big Red Wine Company (2019 vintage)

From the northern tip of the appellation, up against the border. 100% Arneis from two small vineyards. Pelassa practices uncertified organic viticulture. Floral scents, perhaps Broom or Gorse. Poached pears on the palate, dry in style, fresh and persistent with a typical mineral streak. Very good with Trout baked with almonds. In short, delightful. Davy’s Wine Merchants have 2019 at £16.95.

From the centre of the appellation, 100% Arneis. With white flowers, white fruits and minerals, no malolactic fermentation, and sharper acidity. The mineral streak feels more saline with an almond-like finish. Spare and lean. How might this develop over a year or two? Right now, perfect with all sorts of fried fish and an excellent foil for proper homemade fishcakes. Uncorked £13.50 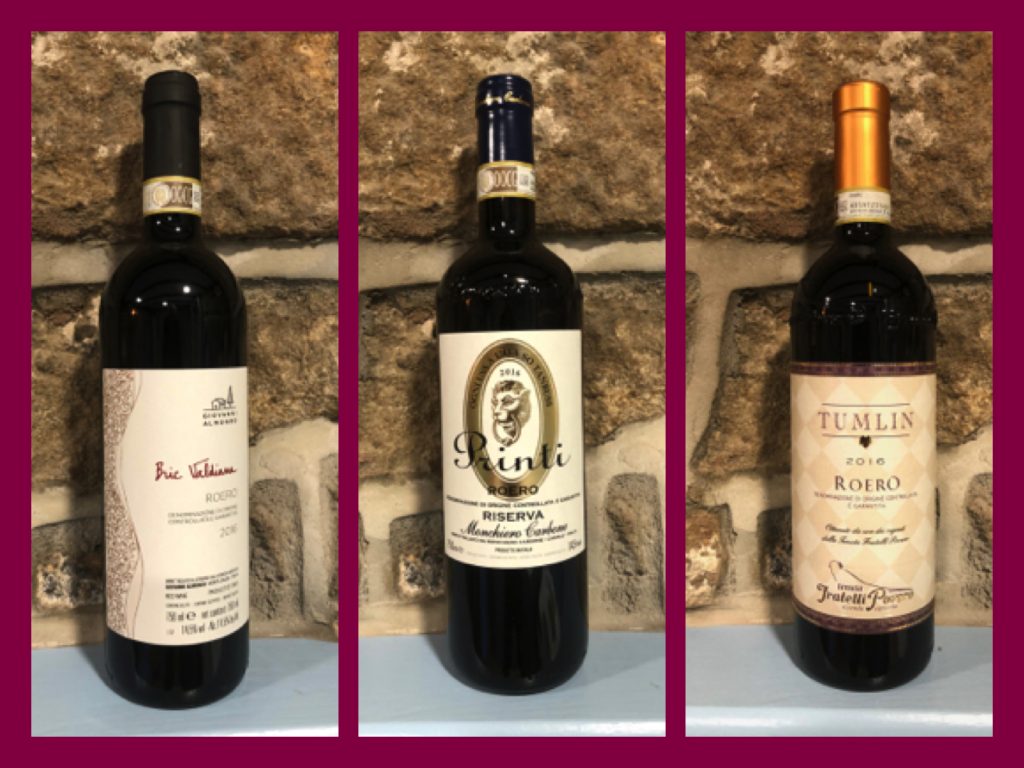 From a single vineyard northwest of the DOCG, sandy soils are full of shells, hence the label. Non-intervention winemaking. The Nebbiolo has 18 months of maturation in big non-toasted Slavonian oak casks. Dark Ruby red, red fruits perfume. The palate has cherry and raspberry fruit enhanced by hints of orange peel and rosemary. The tannins are smoothing out, while the alcohol is not intrusive and without heat. Persistent finish. A terroir wine that’s light on its feet, an outstanding example. Matched with Pork steaks in a black garlic marinade. Lay & Wheeler, £25.48

Monchiero Carbone is a winery in Canale that has vineyards in several locations. Printi comes from 3 ha of vines in a Cru in the centre of the DOCG. It’s one of the appellation’s top wines. It gets 36 months ageing, of which 24 months are in barrique. Raspberry and blackberry scented, with tobacco, cocoa and cinnamon hints. A big-boned yet graceful wine; there’s still some austere tannin before a long, savoury length. Very expressive and years ahead. Drink with powerful food: Beef and game, hearty winter stews. N/A UK, about €25 in Italy. Will someone please bring this into the UK?

Povero is organically certified, and the family planted the Tumlin vineyard in 1948 in the northeast of the DOCG. This old-vine Nebbiolo gets fermentation in stainless steel, and then the wine spends 18 months in the Slavonian oak tonneau.  As a result, the wine is a bright garnet colour.  There’s violet, rose and raspberry scents, while the palate is darker; blackberry and plum interlaced with tobacco, violets, cinnamon and a light touch of vanilla. The tannins add a smooth texture before a long, slightly balsamic finish. Roasts are perfect. With pasta dishes, add some truffle oil or truffle shavings.  The Good Spirits Co. £17.30 and The Vine King £19.99

This article describes Roero and its two contrasting DOCG wines, based on Arneis and Nebbiolo, which can stand with the best. Roero, along with neighbours Monferrato and Langhe, is a prestigious UNESCO Cultural Heritage Landscape, making it a great place to explore next time you’re in Piemonte.

With thanks to Consorzio Tutela del Roero and their 147 wineries and 86 growers – and until I can visit once again – salute!