I visit Franciacorta as often as I can. It’s a lovely part of Lombardy that makes Italy’s finest sparkling wine. However, I also enjoy the still red and white wines made there, called Curtefranca. Majolini’s Ruc Di Gnoc Rosso is one of the very best examples.

Making red and white table wines here have a long history, far longer than the fizz. Sparkling Franciacorta only came along in the early 1960s, though it has now eclipsed all else. Meanwhile, the quality of Curtefranca ranges from good to excellent. Outside Lombardy, these wines are virtually unknown.

These wines were once called Terre di Franciacorta. In 2008, the name changed to Curtefranca DOC, to distinguish them from Franciacorta fizz. Under their DOC rules, the Bianco allows only Chardonnay and Pinot Bianco. The Rosso is a real mixture. It blends Cabernet Franc, Cabernet Sauvignon, Merlot, Nebbiolo and Barbera. In some cases, Cab Franc is Carmenére, a common occurrence in northern Italy. Meanwhile, Pinot Nero, grown for the sparkling wines, is not part of this DOC. As ever in Italy, those wines not meeting these rules are IGT Sebino instead.

Ruc Di Gnoc is super-stylish, blending all the allowable red grapes. Usually, the Cabernets account for 30%, with Merlot 30% and Nebbiolo and Barbera 20% each. The wine ages for a year before release, including six months in old oak barrels. 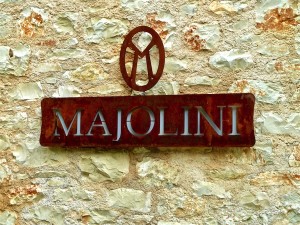 Majolini is also one of the brightest stars in a crowded Franciacorta firmament. They produce a superb range of sparkling wines plus olive oil and grappa. Majolini is in Ome, a village in the northeast of the region. It’s in a particularly attractive hilly area of limestone, swathed in woodland. It’s quite different here from the other parts of Franciacorta, which is a much flatter glacial moraine.

Valentino Majolini established the business in the mid-sixties, starting out with the Ruc di Gnoc vineyard. It’s on steep hillsides of a great hill that overlooks the village; on terraces, called gradoni. It has a significant bearing on wine quality and character. Today, his son, Ezio and nephew, Simone run the estate’s 24 hectares and are now undertaking organic conversion.

Ruc Di Gnoc impresses immediately. The fragrant nose is down to Cabernet and Nebbiolo, an intriguing mix of rose petals and cassis. On the palate, there’s damson and plum, with softness from Merlot and an undertow of Cabernet blackberry. Barbera adds lightness and fresh acidity. The blend is seamless, with a long slow fade which reminds me of pomegranate. What impresses is how subtle and elegant it is.

This 2011 is drinking beautifully now and can keep for perhaps 4-5 years. Gambero Rosso awards it 2 out of 3 Glasses. That’s an excellent rating. However, I think it’s a mean one!

It might soon be the end for Ruc Di Gnoc though. The demand for higher-priced Franciacorta means Fizz is far more profitable. We’ll have to wait and see. So get it while you can!

Enjoy Ruc Di Gnoc with all the typical Italian meat, cheese and fungi suspects. It’s a superb foil for the local pasta speciality called Casoncelli, or Casoncéi in the Lombardy dialect. Both Brescia and Bergamo claim it as their local dish. Casoncelli is a semicircular pasta a little like giant ravioli. It’s full of beef or salami, or, in the autumn, with pumpkin. All you need is to add a lake of melted butter and fried sage leaves. Plus a sprinkling of Grana Padano cheese.

Ruc Di Gnoc is my chosen red wine whenever I’m in Lombardy. It is available in the UK at Bat and Bottle, priced at £12.10.

It tastes just as beautiful in the British wet winter as it does in the Italian sunshine. A bottle of wine I return to, again and again.