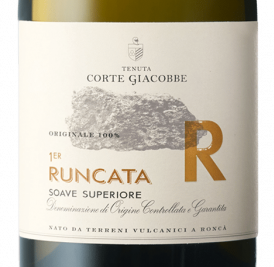 I recently had the pleasure of visiting Tenuta Corte Giacobbe, to find out more about their top Soave Superiore DOCG called Runcata. Runcata is made only with the Garganega grape variety. It’s a single vineyard right up on the Eastern border of Soave. The terroir here has different characteristics from others in Soave, which influences the style of wine made.

A black and white Terroir

Soave is a wine region that combines two very different geological worlds. On the one hand, its white rolling limestone hills are the remains of ancient sea beds. On the other hand, are those hills formed by vulcanism; black basaltic lava and pyroclastic tuffs created by successive volcanic eruptions, first under the sea and later above the surface.

The resultant soil types could not be more different either. The limestone is whitish and full of fossils, whereas the basalts are grey-black. Hence some Soave wines are from limestone, others from basalt and some are a fusion of both, particularly in the river valleys. Add to this different grape varieties Garganega and Trebbiano di Soave, plus unique aspect, altitudes, microclimates and vintage conditions.

And all this comes before the winegrower decides how to make the wine. Hence, it becomes clear that Soave has not only many terroirs but also many possible ways of expressing a sense of place.

In short, the soils may be black and white, but Soave can come in fifty shades of grey. It means there’s the possibility of creating great individuality, much more than so than labels such as Classico or Superiore can infer. It’s why Soave can vary in style and flavour, nevermind quality. Some producers have indeed made specific locations well known over time (for example, Castelcerino and Foscarino). But now Soave has identified and implemented 33 Cru, subzones based on these differences.

Runcata is in the Roncà-Monteccia di Crosara Cru, a Soave subzone comprising the two largest extinct volcanoes.  It’s the largest of the Cru, but unlike elsewhere in Soave, vines cover less than 30% of its area. Most of this subzone faces south-west, with steep and sometimes terraced slopes. 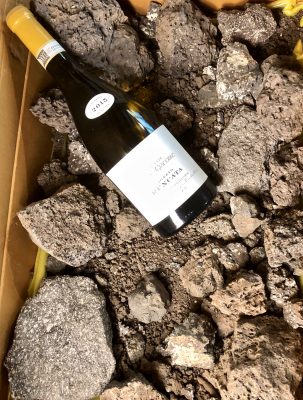 The Runcata single-vineyard occupies the high summit ridge of those two volcanoes, high above the Roncà valley. It’s entirely Garganega and, at over 500 metres, the highest in Soave. That height and aspect mean full sun, cooling breezes and considerable diurnal variation. The glassy black basalt soils are rocky and clayey; full of minerals such as reddish Iron and sulphur. Unspoiled forests are the norm here, with Acacia trees dominating the scene and offering additional protection.

Before we get to the wine itself, here are a few words about the estate and winemaking. 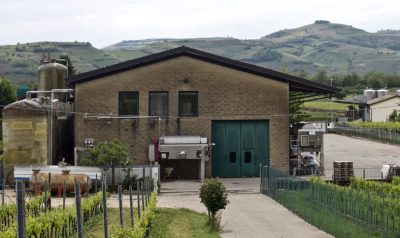 The estate was founded in 1934 by Augusto Dal Cero. Now it’s in the hands of the third family generation – Alberto, Davide, Nico and Francesca. With 40 hectares of vines including the Runcata vineyard, they make a range of wines from Garganega, Pinot Grigio, Chardonnay and Durella.

Viticulture is now biodynamic, though they are not certified. The Dal Cero family now also owns two other estates, one in Valpolicella and another called Tenuta Montecchiesio in Cortona, Tuscany. Corte Giacobbe operates as the distribution centre for all three. When combined, there are a total of some 500,000 bottles per year, of which only 10,000 are Runcata.

As previously mentioned, Runcata is 100% Garganega. The older vines grow on traditional pergolas, with younger vines on the french guyot system. These different systems give further options as the shaded pergola grapes retain more acidity and freshness, the while guyot brings more sugar and body. It’s a useful combination to have in these days of unpredictable extremes resulting from climate change.

Green harvests are the norm in summer to ensure low yields, typically only 40 hectolitres of juice per hectare.

At harvest time, gathering the Runcata grapes is by hand. It happens in two separate passes to ensure optimal ripeness from each part of the vineyard.

Nevertheless, a further rigorous selection occurs in the winery. The best make Runcata. Those remaining are for the lesser DOC Soave cuvée. After keeping them for 48 hours in a refrigerated humidity-controlled room, they ferment in stainless steel tanks using ambient yeasts.  Runcata fermentations are lengthy, as the temperatures are kept low at 11°C to preserve volatile aromatics.

Once fermentation completes, maturation is in 2,000-litre oak casks for a year. They allow some slow ingress of air without marking the wine with wood flavours or tannins, The wine matures on the lees, with occasional stirring up to add more character and complexity. Final blending happens in a pyramidal concrete tank, the same design as used at Cheval Blanc. After another two months, it’s ready for the bottling line, using DIAM 30 corks. The release is eight months later, allowing time for the wine to settle down. 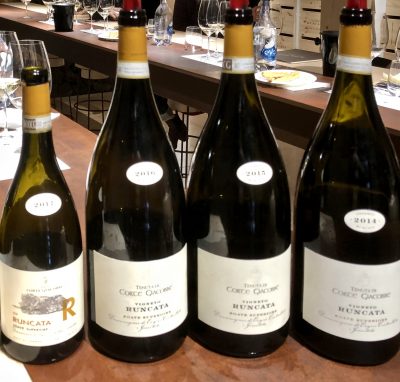 A line up of Runcata Vintages

I had the opportunity to taste the 2014-2017 vintages at the winery, then supplemented by 2012 and 2013 back in the UK. Rather than include individual tasting notes here, it’s perhaps more illuminating to talk about how Runcata changes as it ages.

While the majority of Soave is best when a crisp, fruity young wine, However, the top Cru wines invariably improve immensely in the bottle, just like the best white burgundies, so treat them similarly.

Open a young Soave Cru wine, and it’ll be fresh, crisp and quite possibly delicious. However, much of its colour, aroma and flavours will be absent at this stage. As a rule of thumb, it’s worth waiting for at least three years from the vintage date.

Young Runcata is a light silver-gold colour. It’s characterised mostly by its acacia aroma and primary pineapple fruit flavour. It has a refreshing yet silken acidity and a long mineral finish. As it ages over the next two or three years, a herb quality begins to appear on the nose and palate, perhaps rosemary and sage. The fruit acquires more depth and moves from the exotic towards peach and apricot.

By age five, the colour gradually deepens into deep gold. The nose has become grassier, with hay, yellow flowers and almonds. Meanwhile, the palate develops quince and a touch of honey. The acidity always stays silken, clean and fresh. It ensures elegance and poise, while the finish now has savoury nuances.

This development time isn’t an exact science. It’ll depend somewhat on keeping the bottles. What’s clear though is that it is speedier for hot vintages and slower in cool ones.

In short, if buying Runcata young, keep it for a year or two at least. And there’s no need to fear for older bottles. Between times, tasting it becomes an exciting journey as the wine gradually unfurls. This characteristic enables it to match a wide range of food, including dishes with complex flavours.

Hence Runcata is a gastronomic wine, so choose food that’s richly creamy or buttery. It’s always difficult not to suggest risotto, with prawns, peas, zucchini or asparagus. Fish such as Sole, Brill, or Sea Bass are also a good match, whether alone or with sauces. Alternatively, go for Lobster and Crab, hot or cold. A personal favourite is to keep matters simple and drink it with Gorwydd Caerphilly cheese.

Note: all three Dal Cero estates make high-quality authentic wines including Lessini Durello, Amarone and a spectacular Syrah – an article for another day!

Particular thanks go to Francesca Dal Cerro for great hospitality on my visit!

Want to read some more Soave stories? Try these.