Gambero Rosso once described San Leonardo Rosso as one of the fifty wines that changed Italy. They have awarded their Tre Biccheri to it consistently, and it has become something of a legend in Italy. It’s from Trentino, which is a less well-known wine area. However, there are, as we shall see, some links to Tuscany.

Trentino, in Northern Italy, is best known for breathtaking alpine scenery. The snow-capped jagged Dolomites form a vertical backdrop to the San Leonardo estate. Trentino is also an area of considerable strategic importance because the Alpine route from Italy to Austria and Germany passes through it.

Rosso is the flagship wine

Tenuta San Leonardo is in the far south of Trentino, a few miles north of the border with the Veneto. So, despite an impression of remoteness, it’s less than an hour to Verona and even less to the beaches of Lake Garda. However, the wine made is entirely different. San Leonardo Rosso is a Bordeaux-blend, but one unlike any other. 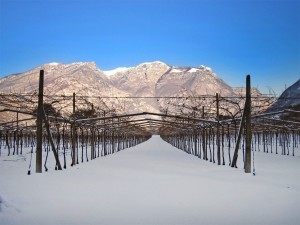 The Rosso is the estate’s flagship wine, an unusually simple name in these days of fantasy names. Because it employs the Bordeaux grape varieties, it was therefore initially labelled a Vino di Tavola and then was called an IGT Vallagarina. These days, it is an IGP Vigneti Delle Dolomiti. None of these classifications is likely to attract your attention or give clues to the excellence of the wine. Only the name San Leonardo has resonance with those that know. For some reason, Rosso is an “insider’s wine”, yet something of a grail for Italian wine lovers.

The Estate has a fascinating history

This beautiful estate of 300 hectares at Campi Santi has ancient roots. Here we are in the Val Lagarina, where a rural road flanks the left bank of the River Adige. It’s the Via Claudia Augusta, built by the Romans to Austria and Germany in 15 BC. San Leonardo has always been a strategic location, and so has quite a story to tell.

The King of the Lombards married here, at the Campi Santi, in 589 AD. In 972 AD the Bishop of Verona granted vineyards, shown in a rediscovered fresco in the ancient local Church.

By 1215 there was a monastery ministering to returning Crusaders, and several Popes later made visits. In 1656, the Pope suppressed the religious order for supposed heresy. Hence the aristocratic de Gresti family gained the farming rights. Subsequently, they bought the estate, making wine and growing other agricultural produce.

In 1894, The Marchesa, Gemma de Gresti married into the Gonzago family. It is her descendants that own the estate today. She was remarkable for repatriating 11,000 prisoners kept in Russian concentration camps. In 1918, San Leonardo held the Armistice between Italy and the defeated Austria-Hungary. When fortunes reversed, it became an HQ for the Wehrmacht during World War II. 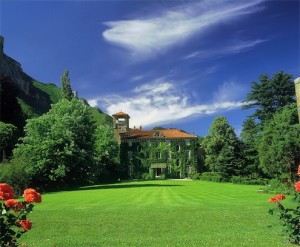 While winegrowing here has gone on for centuries, everything changed radically in 1978.

Carlo Guerrieri Gonzaga inherited the estate in 1974 and with it the title of Marchese. He is a trained oenologist that had spent eight years working with his relative Mario Incisa della Rocchetta at San Guido in Tuscany. It’s where Sassicaia was born, midwived by the oenologist Giacomo Tachis. Sassicaia soon became the iconic Italian Bordeaux-blend and started the entire vinous revolution on the Tuscan coast. It also became the major influence on the direction Gonzaga took with San Leonardo.

When Carlo returned to San Leonardo in 1978, he planted French Cabernet Sauvignon alongside the existing Merlot and Cabernet Franc. As it then turned out, the Cabernet Franc proved to be Carmenère.

Carmenère is a grape now rare in Bordeaux that thrives in Chile! In fact, this discovery has become commonplace in northern Italy. After the first vintage of the Rosso in 1982, Giacomo Tachis joined from Sassicaia as an adviser. When he retired in 2000, Carlo Ferrini, another leading consultant, took over. He’s still there, alongside Carlo and son Anselmo. 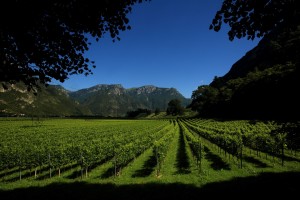 There are only 30 hectares of vineyards, organic since 2015. The rest of the estate remains a mix of forest and fields. On the flat gravels made by an old Adige riverbed, you’ll find Merlot planted. On the steeper slopes with sandy soils is where the Cabernet Sauvignon, Cabernet Franc, Carmenère and Petit Verdot is.

There’s traditional pergola training here for Carmenère, which is decidedly un-French. But, as I’ve seen in other parts of northern Italy, it’s a traditional Italian system that’s making a comeback. Not only does it enable the Carmenère to ripen fully, but it also offers more protection in these days of global warming.

San Leonardo has an ideal microclimate for all these red varieties. There are long hot summer days, the moderating influence of Lake Garda and mountain protection from northern chills. The wide temperature variation between night and day retains fresh acidity in the grapes and is a hallmark of the wine, which is never more than 13.5% alcohol. Only in good vintages is Rosso made. 2011 is the latest release, producing 55,000 bottles.

It’s usually 60% Cabernet Sauvignon, with a blend of Carmenère, Cabernet Franc and Merlot making up the balance. Proportions vary each year according to tasting, but the style has never changed. That’s despite the critic’s love of more powerful and lush Bordeaux blends, the modern fashion for over-oaking, and even changing the wine consultant. When you hit the bullseye first time out, why change?

Maturation is in French oak barriques, only partially new, for 18 months. Afterwards, there is further maturation in the bottle for around 20 months.

This wine is very long-lived, improves with age and can easily last more than 25 years. It is not designed to be drunk young. But young is how I drank it. 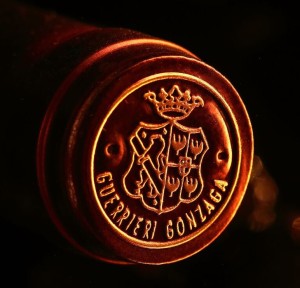 Consequently, evaluating such wine on release is always provisional. This 2011 has barely reached adolescence, with it’s best drinking window five or even ten years hence.

Hence it was decanted for four hours before serving. Austerity is the hallmark at this stage. There are freshness and minerality rather than big fruit or power. Something dark and savoury lurks at its heart, bound up with lead-pencils and Cassis. Fine-grained tannins still need to give way, and then more weight and complexity will doubtless come. It opens up in the glass to give tobacco scents, a long spicy finish with hints of cocoa and smoke. What’s amazing now is the balance and persistence.

This wine makes you think, less about flavours and more about texture. It’s one of those wines where you cast about blindly for the right descriptors, at the point where everyday language fails.

So I’d rather describe it in physical terms; as delicate, athletic, weightless, poised, focused and, most of all, exciting. Perhaps it’s a Ballerina dancing. That’s it; this is Darcey Bussell in a glass.

And food is an essential partner. Roast Pheasant had those gamey notes that perfectly matched without becoming overpowering, so do simple roasted vegetables. A superb experience.

Given my love of indigenous grape varieties in Italy, it always takes something special to get me enthused about the so-called international grapes. However, there is no doubt that San Leonardo Rosso is a fingerprint of this land, just as Sassicaia is in the Bolgheri.

San Leonardo is unlike those richer, more powerful Bordeaux blends from warmer climes, say from California, Australia, or South Africa. On the other hand, if you prefer the grandest of grand cru classé Claret, this is for you.

Regardless, this is one of the world’s most exceptional red wines, keep it for very special occasions. And please, don’t open yours too early!

UK Price £45.17 at Tannico. When you compare this to the prices of its natural peers, it’s a bargain too!

Alternatively, discover more about the wines of Trentino here.