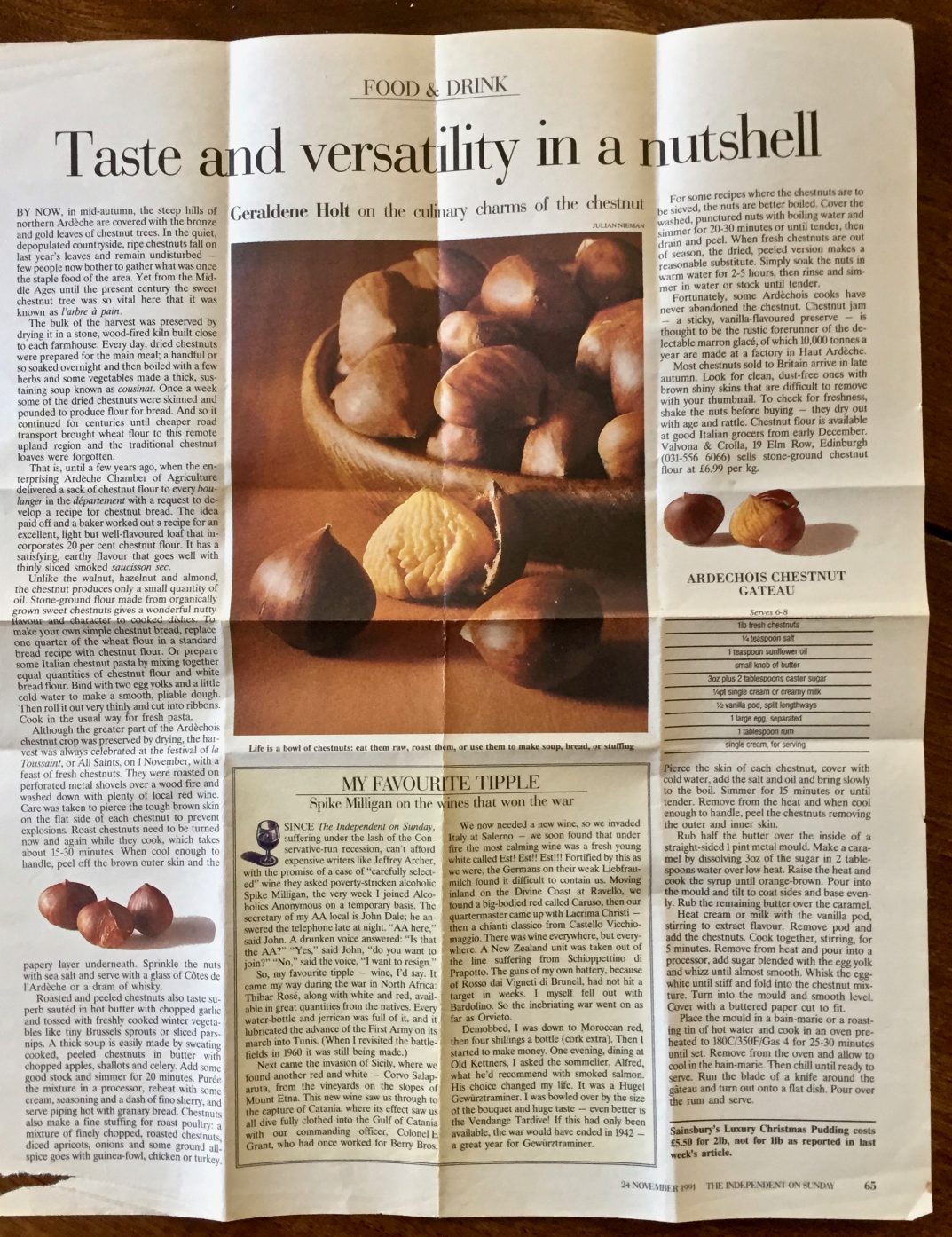 I have before me a torn-out page from the Independent on Sunday, from 24th November 1991. It’s page 65. There, below an article extolling the culinary charms of the chestnut (chestnut flour available from Valvona & Crolla in Edinburgh, priced at £6.99 per kg), is a weekly guest column called My Favourite Tipple. That particular Sunday was Spike Milligans, “The Wines That Won The War”.

While respecting any existing © Copyright (Independent on Sunday? the estate of Spike Milligan?), I have reproduced this piece for your entertainment. Without further ado, over to Spike.

“Since The Independent on Sunday, suffering under the lash of the Conservative-run recession, can’t afford expensive writers like Jeffrey Archer, with the promise of a case of “carefully selected” wine they asked poverty-stricken alcoholic Spike Milligan, the very week I joined Alcoholics Anonymous on a temporary basis.

The secretary of my AA local is John Dale; he answered the telephone late at night. “AA here,” said John. A drunken voice answered: “Is that the AA?” “Yes,” said John, “do you want to join?” “No,” said the voice, “I want to resign.”

So, my favourite tipple – wine, I’d say. It came my way during the war in North Africa: Thibar Rosé, along with white and red, available in great quantities from the natives. Every water-bottle and jerrycan was full of it, and it lubricated the advance of the First Army on its march into Tunis. (When I revisited the battlefields in 1960 it was still being made.)

Next came the invasion of Sicily, where we found another red and white – Corvo Salaparuta, from the vineyards on the slopes of Mount Etna. This new wine saw us through to the capture of Catania, where its effect saw us all dive fully clothed into the Gulf of Catania with our commanding officer, Colonel E Grant, who had once worked for Berry Bros.

We now needed a new wine, so we invaded Italy at Salerno – we soon found that under fire the most calming wine was a fresh young white called Est! Est!! Est!!! Fortified by this as we were, the Germans on their weak Liebfraumilch found it difficult to contain us. Moving inland on the Divine Coast at Ravello, we found a big-bodied red called Caruso, then our quartermaster came up with Lacrima Christi – and then a Chianti Classico from Castello Vicchiomaggio. There was wine everywhere, but everywhere. A New Zealand unit was taken out of the line suffering from Schioppettino di  Prepotto. The guns of my own battery, because of Rosso dai Vigneti di Brunello, had not hit a target in weeks. I myself fell out with Bardolino. So the inebriating war went on as far as Orvieto.

Demobbed, I was down to Moroccan red, then four shillings a bottle (cork extra). Then, I started to make money. One evening, dining at Old Kettners, I asked the sommelier, Alfred, what he’d recommend with smoked salmon. His choice changed my life. It was a Hugel Gewurztraminer. I was bowled over by the size of the bouquet, and huge taste – even better is the Vendange Tardive! If this had only been available, the war would have ended in 1942 – a great year for Gewurztraminer.”

Spike’s gone, but not forgotten

Almost 26 years ago I must have kept this newspaper page, perfectly preserved unread in an old book. On the other side of the page is a full-page colour advert extolling the virtues of visiting València. Now I don’t recall whether I kept this page for the chestnut article, Spike’s wit or a for a future travel destination. I like to think it was for all three. It’s a little time-capsule, so the page is now safely back in its resting place.

And as for Spike Milligans* Tape Recorder? Didn’t you ever hear the song by The Membranes?

*Milligans should have an apostrophe, (Milligan’s) so don’t blame me!