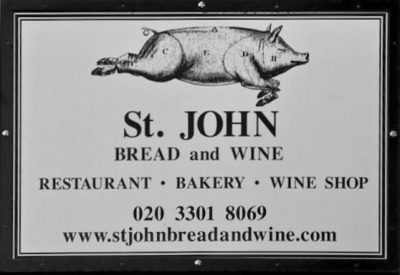 Back in 1994, Fergus Henderson and Trevor Gulliver opened the St John restaurant. It’s still around the corner from Smithfield Market in a once dilapidated part of Clerkenwell. The emphasis is on British recipes, simplicity and seasonality. It also includes all the meats now ignored by squeamish Brits. Yes, we’re talking offal. You know, all those scary bits disguised in sausages and burgers. St John helps remind us that offal needn’t be awful.

The St. John philosophy is that we should eat every part of the animal, apart from the squeak. It’s a decidedly French and Italian attitude not to waste nature’s bounty. It’s rooted in the poverty of rural living where meat in the diet was the exception rather than the rule. In Britain, this is something we have unfortunately forgotten.

Vegetarians and Vegans might think to look away. After all, one of the unattractive things about meat is the despicable treatment which animals can receive. Seems to me that if you are going to eat meat, then it’s essential to respect the animal that gave its life for your gastronomic pleasure. First, treat it well throughout its life and then honour that life by not wasting any part.

Meanwhile, there’s been plenty of acclaim for St John Smithfield. However, the business has also expanded. There’s been a best-selling book, (Nose to Tail Eating) and its sequel. There is also a wine business. Along the way, a more informal dining space became St John Bread and Wine, the subject of this review. If you are in Bermondsey, then St John Maltby offers similar fare, as does the St John Bakery.

St John Bread and Wine opened in 2003 opposite the redeveloped Spitalfields Market, five minutes from Liverpool Street station. This ex-Bank become another St John restaurant with the same food philosophy but at more accessible prices. Over the years I have visited many times.

On entering, the surroundings are rather spartan, perhaps reflecting the owners’ background in architecture. Whitewashed walls, simple wooden tables and chairs, and an open kitchen. There is usually noisy animation, hubbub being the soundtrack. The dining style is therefore refreshingly informal. People come here to relax, eat and enjoy the company of others.

The day’s menu changes according to the availability of produce. It’s in three parts; breakfast, lunch and supper and the all-day bar menu. Plus there is a separate feasting menu is for parties of ten or more that pre-order. That way you can get a whole sucking pig! Pick a selection of plates to share sequentially. I find that four is an ideal number for two people.

The service is knowledgeable about the dishes, ingredients and suitable wines. Choosing may take a while, but what’s the hurry? There’s often Ham, heart and horseradish. Tongue, faggot and laverbread. Trotters, brawn and mutton. And much more besides. Portions are hearty, delicious and unpretentious.

Meanwhile, the wine list is mostly French, with an emphasis on less well-known regions. Many of these are available by the glass. That’s a good option if you share various plates or are experimenting with the unfamiliar. You could BYO with corkage, but why bother? One minor criticism is that I’d now like to see some English wines added.

Smoked sprats and horseradish is a simple yet delicious dish, served whole and cold with a slice of lemon. The golden fish comes with excellent brown bread and is great with a glass of Picpoul de Pinet. This French white is an ideal foil for the smoky chew and crunch of the fish and horseradish bite. If the sprats aren’t around, there will likely be mackerel or sardines.

Crispy pig’s skin and tarragon? One of my favourites. Forkfuls of twisted pork scratchings mix with the crunch of roasted radishes and the intensity of green Tarragon leaves. A great blend of flavour and texture.

Ox heart, pickled walnut and watercress is another. The heart is served in delicate slices, beautifully pink and soft, with heaps of peppery green watercress and walnuts. Fabulous flavours mean a glass of red is essential. Their Loire Cabernet Franc hits the spot. Sébastien David’s L’Hurluberlu means “the eccentric”. The exuberant red berry flavour and aromatic pencil-lead aromas match this dish uncannily well. Buy a bottle to take home!

Contrarily, vegetarian dishes are good too. Examples include Lentils, fresh beetroot and yoghurt or courgettes, lentils and Goat’s curd. I could eat them forever.

The dessert menu is just a feast of mouthwatering traditional fare, many being gutsy treats. Choose from Eccles cakes, bread pudding, cheesecakes, treacle sponge, or Eton Mess. Finish off with excellent coffee or a glass of dessert wine.

In short, St John Bread and Wine has marvellous British cooking. There’s more than a nod to French peasant food and Italian Cucina Povera. Next time, I will buy their T-shirt!

Go for breakfast. Their bacon sandwich is simply the best. Fergus describes it as, “the bacon sandwich of your nocturnal fantasies”. I’ll leave that slightly disturbing thought with you. If a better way to start the day exists, I’ve yet to find it.