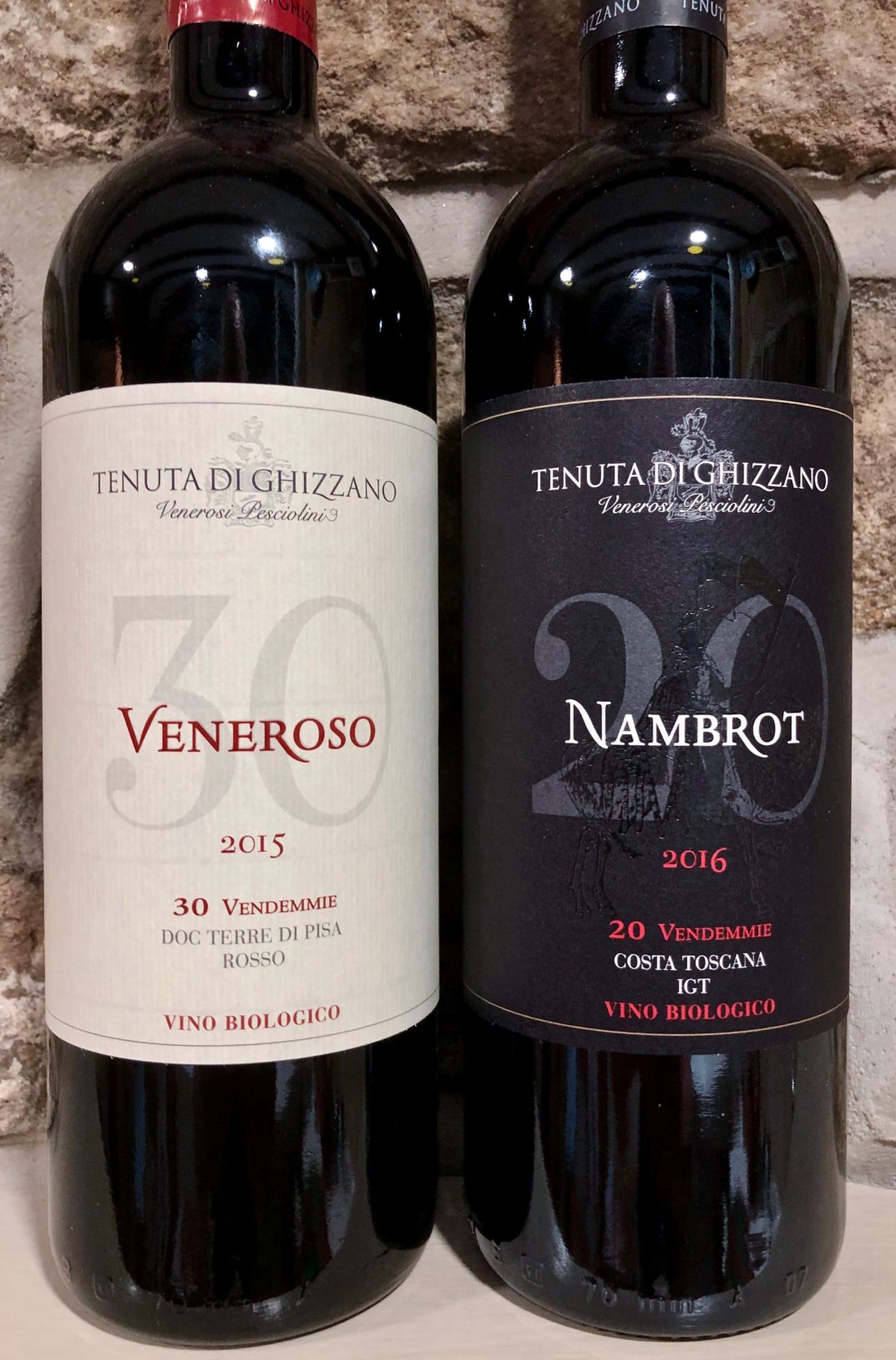 The Tenuta di Ghizzano occupies the gently contoured low hills of the Colline Pisane, southwest of Pisa, less than an hour away. Here, there’s plenty of wine grown in coastal Tuscany, yet they are often obscurities. Twenty-six generations of the Venerosi Pesciolini family have owned this 350-hectare estate since 1370. Today it’s in the safe custody of Ginevra Venerosi Pesciolini, who took over from her father in 1996.

Ginevra’s father, Pierfrancesco, pioneered research into Sangiovese clones and rootstocks, replanting from 1989 and experimenting with Cabernet Sauvignon and Merlot. The estate started bottling its wine in 1985, as previously, they sold the grapes. It was a time when Italian wine was still in the doldrums but had excellent quality potential.  Ginevra has followed her father’s pioneering work, creating vineyards and a winery in environmental balance that realises the gifts of this land. The wine labels say, “Where the earth’s fruits come from a place in harmony with nature, there is already the potential for true excellence”.  Amen to that.

Tenuta di Ghizzano is a leading producer in this part of  Tuscany.  The property has 20 hectares of vines in 15 scattered plots, 20 ha of olives, and 150 ha of woodlands. As a mixed Biodynamic farm, chickpeas, wheat, and fava beans are grown. Since 2001 it has also offered high-class Agriturismo. 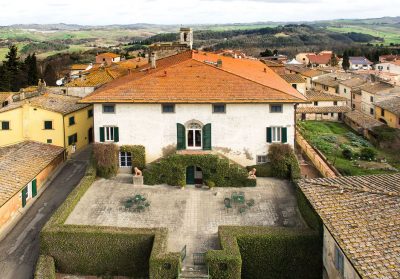 Tenuta di Ghizzano produces around 80,000 bottles per year.  The climate is sunny and warmly Mediterranean, tempered by sea breezes that protect against temperature extremes, particularly spring frosts, on these relatively low hills. The soils are primarily chalky clay-sand, studded with the fossil seashells that indicate their origins as ancient sea beds.

There is a wide range of grape varieties planted in fifteen vineyard plots. They include the usual internationals that dominate this area of Tuscany. However, at Ghizzano, it’s Sangiovese that retains ascendancy. Meanwhile, the estate’s historic experimental vineyard dating back to 1989 is called Chiesina and contains all the winery’s grape varieties.

The estate was certified organic by Suolo e Salute (Soil and Health) in 2008, followed by Demeter certified Biodynamic in 2018. In the aisles between the vines grow thirty different plant species.

Everything here is about the lightness of touch. All the grapes are hand-harvested and taken to the solar-powered winery. After destemming, they undergo a further selection on a sorting table. Finally, the grapes destined for the estate’s two top wines go into stainless-steel bins for treading with human feet. This costly ancient practice is a rare one these days outside of the Port producers of the Douro. However, they will tell you that this grape crushing method is still the best way of obtaining high-quality juice. 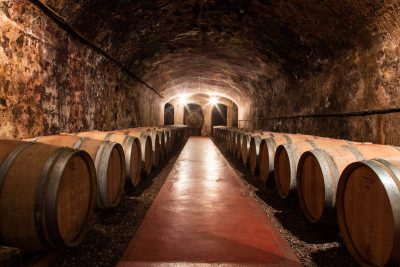 Fermentation is spontaneous with natural yeasts. Furthermore, all winery operations use gravity to move the wine, which is gentler than pumping.

In maturation, wood is primarily for ageing rather than imparting tannins or flavours. In recent vintages, new wood has reduced, while the winery is experimenting with cocciopesto egg-shaped vessels and terracotta.

However, this article features the two top red blends, each celebrating its anniversary, namely Veneroso and Nambrot, which now follow below.

The 30th-anniversary release is a blend of 70% Sangiovese with 20% Cabernet Sauvignon and 10% Petit Verdot, so it qualifies for the small (46 ha) DOC Terre di Pisa. The grapes are fermented in open 3,000-litre wooden vats and given 16 months of maturation in used 500-litre French oak casks. The first vintage was in 1985; it was also the first wine bottled at the Estate. It heralded Italy’s winemaking renaissance and the emergence of Supertuscan wines.

The grapes for the 24,000 bottles of Veneroso grow in the Torricella Bassa, Il Monte, and Chiesina vineyards. These lie at elevations of 180 metres and face south-southwest.

After decanting for an hour, the wine is open and ready. A youthful ruby-garnet colour, a loose tea aroma redolent of Sangiovese, with a eucalypt note thrown in. The palate has a superb balance of acidity, fruit and tannins, with an attractive mentholated flavour mixed with sour cherries. A long finish shows a hint of grilled almonds.

Food-wise, Lasagne al Forno hits the spot for me. Veneroso with that ragù and béchamel sauce will have you returning for thirds, not just seconds.

Veneroso is an excellent advertisement for the wines of Pisa!

Pronounced “Nambro”, 2016 is the 20th-anniversary release, with 9,500 bottles. This red is a Bordeaux blend of 60% Merlot, 20% Cabernet Franc, and 20% Petit Verdot and uses the IGT Costa Toscana appellation, which allows a wide range of red, Rosato and white wines.  Again, it ferments in open-topped oak vats. Maturation takes 18 months in 225-litre French oak barrels, of which 30% are new.

The Venerosi Pesciolini family traces back to 820 AD with their ancestor, Nambrot, a Carolingian aristocrat, lending the wine his name. It was initially 100% Merlot, beginning with the 1996 harvest. However, it’s now a blend with Cabernet Franc and Petit Verdot. The amount of new oak used has also reduced over time.

Again decanted for an hour, this is a young wine of brooding intensity and longevity. There’s an attractive cedar note on the nose, plus violets and tobacco. The youthful palate shows a real tension, with brown spices underpinning damsons and cherries. A black olive note alongside a graphite/pencil minerality adds complexity. Finally, a long Italianate finish is slightly warming but very satisfying. Nambrot opens up in the glass in ten minutes or so, if you can resist it that long. As for food, choose from steak, lamb or game. Bistecca alla Fiorentina is an undeniable classic. Anything with truffles will work well too.

This wine is delicious now, and another couple of years will bring it to its peak. It’s up there with the best Italian Bordeaux blends. If this wine doesn’t make you catch the next flight to Pisa, then I’m afraid nothing will. Time to pack my bag!

I rate these wines hugely and show that this relatively unknown corner of Tuscany can make wines as good and distinctive as their more famous peers. Hence I recommend that you join in with the anniversary celebrations by trying them yourself!