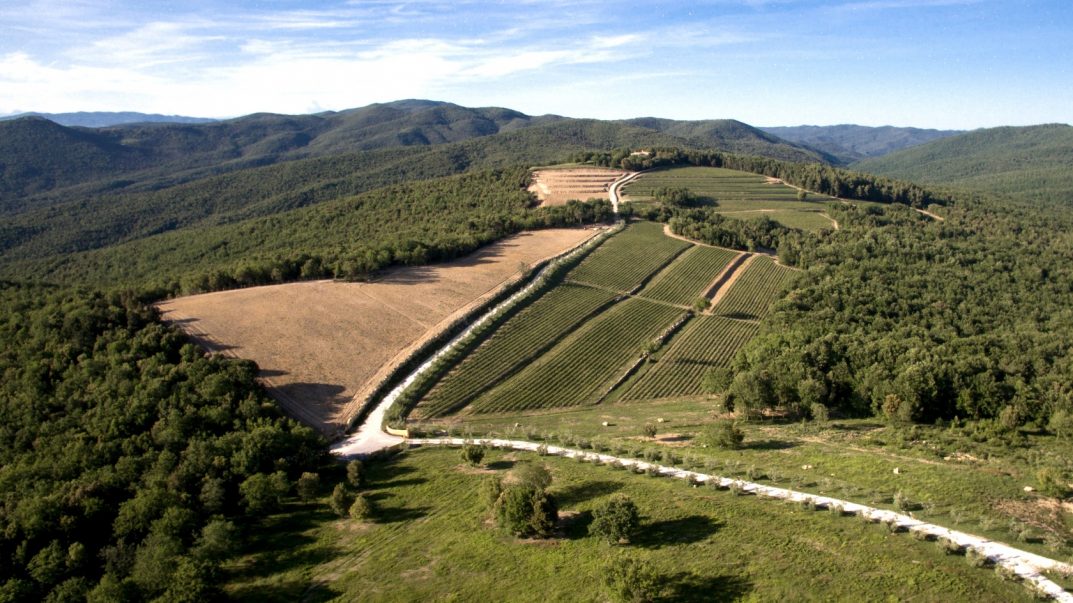 Tenuta Sette Cieli: above us only sky

There are many bright stars in the Bolgheri heavens. Bolgheri is the tiny Tuscan village that now shoulders a colossal reputation. These days it’s famous for those iconic red wines that rival or surpass the most outstanding wines of Bordeaux.  Much of Bolgheri is a flat coastal strip, but rolling hills rise not far inland. One such star here is Tenuta Sette Cieli, which means “The Estate of the Seven Skies”. That refers to its hilltop position at 400 metres altitude, from where there are panoramic views in every direction.

This boutique Estate comprises some 80 hectares, mostly forest. There are ten hectares given over to vines. High-density Guyot planting means these are just 40 centimetres apart, forcing their roots to go deep searching for water and nutrients.

Planting began in 2000, with dry stone wall terraces separating each vineyard plot. You’ll only find the “Bordeaux varieties” grown here, namely Cabernet Sauvignon, Cabernet Franc, Merlot, and more unusually, Malbec.  This terroir – a mild maritime climate and high elevation combined with slate, granite and clay soils –  has proven to be particularly suited to such varieties. Indeed, Malbec seems to have a particular affinity with altitude; ask anyone from Argentina!

The estate demonstrates skilful wine growing. It’s been organic since the outset, and all vineyard work is by hand. In the winery, fermentations are in stainless steel with indigenous yeasts. Subsequent maturation is in French oak barriques, as is usual for this style of wine. There’s no filtering or fining either.

However, previewed here are the two top wines. These best characterise this hilltop terroir and the estate’s philosophy. Both are IGT’s, namely Indaco, a Bordeaux-blend, and Scipio, a pure Cabernet Franc.

Also, there’s no doubt that 2016 is regarded as the best year in Bolgheri for perhaps a decade. Consequently, drinking this 2016 vintage is particularly spectacular. Decanting is recommended for both wines.

Indaco in Italian means the colour Indigo, often the colour of the sky at sunset at the estate.

It’s equal thirds Malbec, Cabernet Sauvignon and Merlot. Maturation is for eighteen months in French oak barriques, 35% new. The blend is from the best of those, before another six months ageing in bottle.

Such maturation means this blend is a seamless marriage of alcohol, fruit and acidity. It’s a wine not short of any of those three things, yet it’s the balance between them that’s outstanding.  Aroma and flavour-wise, blackberry, garrigue and cedar are prominent before a long spice and coffee finish. Full-bodied and with polished tannins, but not lush or overblown. Oak influences are subtle and nuanced. Already a delicious wine right now, I’d expect it to develop considerable complexity for those willing to wait longer. On average, 25,000 bottles each year.

The name Scipio refers to the Roman General that defeated Hannibal*. Scipio is 100% Cabernet Franc which gets 24 months in French oak barriques (40% new) and then another 12 months in bottle.

There are some other 100% Cabernet Franc’s in the Bolgheri, but most are from the flatlands at sea level. Again, the altitude brings fresher acidity, making for an elegant and precise combination.

Scipio is a full-bodied wine that’s unmistakable Cabernet Franc. However, there’s also a vibrant character without any heavy-handed oak treatment. As it opens up in the glass, pencils, grilled almonds, coffee, and a hint of leather appear. Those flavours and aromas hint at the potential for complexity. Hence, while Scipio is drinking well now, this wine will become spectacular if left for longer.

Both these wines are food-friendly, and both are unmistakably Italianate in style. Naturally enough, big meats such as beef or game will be particularly appropriate for both wines. Hence a hearty British Sunday Lunch wouldn’t be out of place.

However, I drank both the wines with the traditional Tuscan winter vegetable soup/stew called Ribollita, a comforting and delicious match.

This review is a preview, as these two wines will be available at the end of May 2020. Those extra few months will doubtless improve them a little more. Also, the longer maturation time means that both can be opened and enjoyed on release. Both are already drinking well yet capable of further development over lifetimes that could be decades.

Tenuta Sette Cieli has the likes of Sassicaia and Ornellaia in its sights, both visually and as peers, and both wines are of a similar calibre. Consequently, that makes them excellent value too. I hope to revisit these 2016 wines in three years by when they should be at their peak.

Until then, I can only imagine.