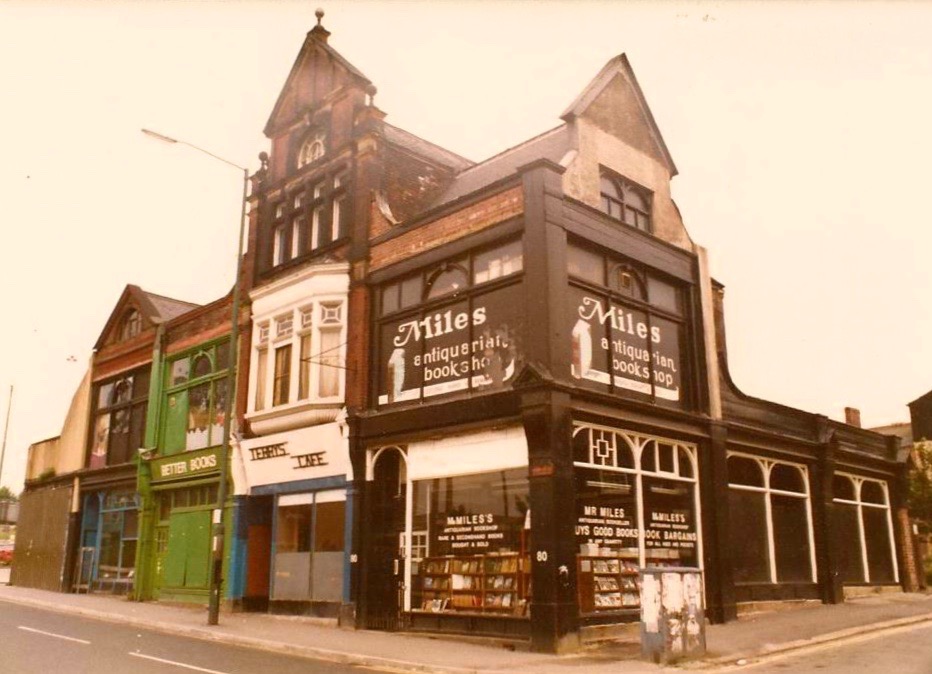 Walking down Woodhouse Lane in Leeds recently, I passed by the Universities, heading toward the city centre. On the left, past the Brutalist Car Park, and where Leeds Beckett Wellness Centre now stands, once stood Terrys All-Time. I sat down, overwhelmed by unbidden memories.

Terrys All-Time, (no apostrophe) was a real 24-hour cafe, long demolished and forgotten. It shared a row of squalid Victorian shops fronting a once elegant Georgian Square. In the late nineteen-seventies, this was an island of squalor ringed by sixties slum clearance and concrete.

Momentarily, everything vividly reappeared in front of me, just as it was decades ago. Here again, were the grimy buildings covered with fly posters and right there was the Terrys All-Time sign; a clock with hands at ten-to-two set above a dirty doorway. The windows were permanently opaque, seemingly from a mixture of condensation and nicotine. The entering greeting was a warm reek of chip fat and fag smoke. That slowly gave way to an undertow of stale sweat, damp, Brut and Body Mist.

Terrys All-Time was filthy inside, but it contained a rich kipple of items, both human and non. The counter for orders was at the far end, underneath a broken peg-board menu. To reach it, pass by stained and chipped Formica-topped tables. The bench seating had long lost most of its stuffing and all of its comfort, covered in tacky brown leatherette. The sticky fake-wood lino floor needed careful negotiation; its edges curled up to trip the unwary.

Stacks of newspapers sat in one corner covered in loose distemper dandruff. The appeal of their torn delights differed according to the hour; Page Three and the Racing Post for daytime, the NME for the late-night crowd. It was late after the gigs, pubs and clubs turned out when Terrys became our essential destination.

Terry, the mysterious owner, was thought to be a taxi driver. Nobody I knew had ever met him. Usually, the service was by a tiny chain-smoking woman. She was Hylda Baker’s body double. You didn’t dare cross her. Nobody knew her name.

Dim and dingy, all colour was absent. It was like living in a black and white sixties film; one ruled by the kitchen sink realism of the British New Wave rather than the glamorous French Nouvelle Vague. Illumination came from some battered fittings and a flickering fluorescent tube out the back.

Of the late-night clientele, some were in at least semi-permanent residence. A man always sat in Faginesque filth in the front corner, out of touch, broken and silent. Others were a motley selection of pushers, pimps, and petty criminals. Young women, their faces sabotage of make-up, would stumble in. Dressed in tube tops, catalogue flares, and platform shoes, they were the remnants of long outmoded fashion. Skinheads in Harrington Jackets would demand money with menaces, usually without success.

All this made Terrys an edgy all-night venue, though alternatives were few. But its jukebox containing brilliant singles, either Northern Soul or those made by our local bands. Terry’s became our gloriously seedy after-hours retreat, an amoral clique of the hip, the pretty, and the vacant. We imagined ourselves being able to change the world with a sheer attitude, modern art, and a killer tune. Sometimes we bickered, boasted and plotted. Mostly, we tried to think of something meaningful to say, but could not.

Leaning on the mosaic-tiled counter in the flickering half-light waiting for an order. Heads swimming with alcohol, scrambling for loose change. Kim Weston’s “Helpless” or R. Dean Taylor’s “There’s a Ghost In My House” playing loud. Stumbling back with tea, chip butties and bacon rolls served on a random range of chipped Pyrex. Pass me the sugar, brown sauce, and the Bensons.

Then there were the long comedowns in the predawn light, unable to sleep, in the company of elegantly wasted friends. For us, it was a weekend ritual. For the less committed it was a way to keep warm until the buses started running.

I only ventured into Terrys All-Time during the day once, one freezing winter lunchtime. I had been browsing in the shop next door, the grandly titled Mr Miles’ Antiquarian Bookshop, which, fittingly, had made a brief appearance in the film Kes. The daylight revealed Terrys moribund glory yet the place had a different atmosphere. Bored students and office workers nursed mugs of tea while labourers tucked into double egg and chips.

A favourite line by John Cooper Clarke* summed it up,

“The burger joint around the bend, where the meals thank Christ are skimpy,

For you, that’s how the world could end, not with a bang but a Wimpy.”

Terrys All-Time is history. Replaced by an invasion of meretricious corporate café chains and urban redevelopment. The clock sign went first, a few months before Terrys became rubble. Perhaps someone took it as a memento.

There really should be a Blue Plaque.