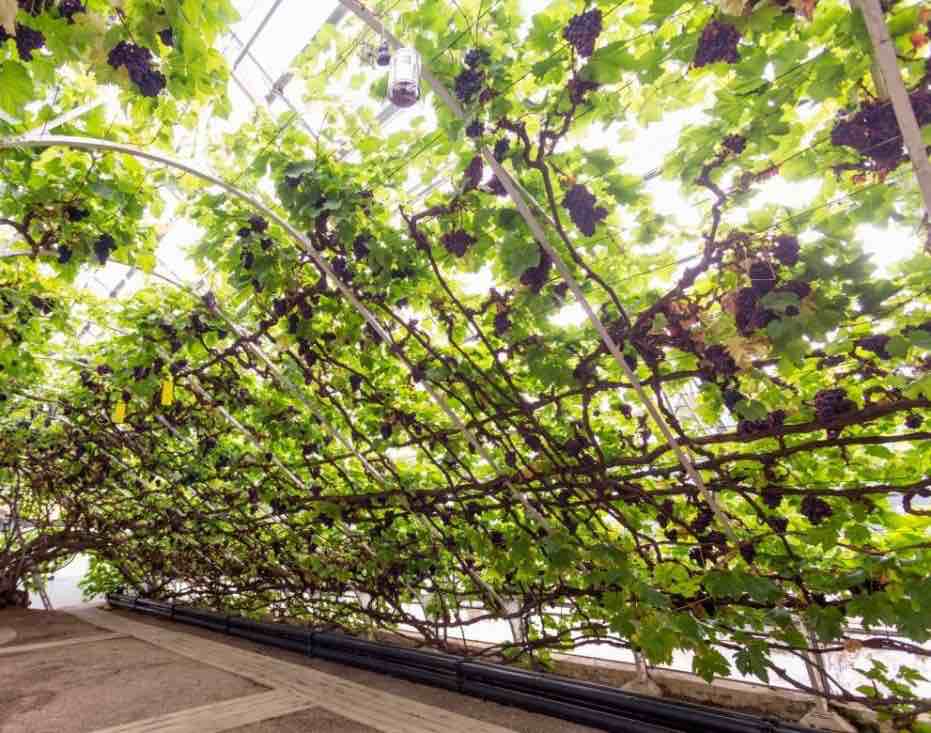 Where is the world’s oldest grapevine? Perhaps in continental Europe, which has been growing grapes for centuries. Alternatively, in a place that’s a cradle of winegrowing, such as Georgia or Syria. Surprisingly, the world’s oldest fully documented grapevine is thriving in London. This is The Great Vine, which it’s now 252 years young. There are other candidates worldwide, some said to be older, but the Great Vine is Vitis Vinifera (the species of cultivated vine for winegrowing), and its age is fully authenticated from historical documents.

This grapevine was planted in 1768 at Hampton Court Palace, on the River Thames in London, by the famous landscaper Capability Brown. It bears fruit every year. Indeed, though it lives a pampered and sheltered life, it’s trained, pruned, and harvested like any other vine. Despite this venerable age, it shows no sign of decline.

This is an enormous lifespan. In 1768, George III was on the British throne. Britain had yet to lose the Americas, so this grapevine is older than the United States. That year, James Cook departed on his first voyage on the Endeavour, where he mapped New Zealand and became the first European to land in Australia. Meanwhile, The Royal Academy of Arts was founded, with painter Sir Joshua Reynolds as its first President.

This vine was for table grapes. They were then rare and exotic desserts. Consequently, the fruit would have been both expensive and prestigious, reserved for the privileged few.

Meanwhile, a modern grapevine’s commercial lifespan is usually regarded as between 20-25 years, though many growers have vines far older, some over 100 years. Older vines are known for their ability to make exceptional quality grapes, even though their yields become much diminished.

However, there are relatively few Centurion vines. Partly that’s because they would often be uneconomic. But it’s also due to the devastations of phylloxera and fungal diseases in the nineteenth and early twentieth centuries. However, one candidate could be the Assyrtiko vines on the Greek island of Santorini. Some could be many centuries old because phylloxera cannot endure Santorini’s loose black volcanic soil – but there are no records to prove it.

The Great Vine is probably lucky to have survived. However, it has a heated glasshouse all to itself. That’s because gardeners once thought that a single large vine would produce a more abundant crop. The roots are outside, with the plant’s upper part grown inside, using the glasshouse roof as a pergola.

In 1768, a cutting arrived at Hampton Court, from a mother-vine at Valentine’s Mansion in Ilford, Essex.

By 1887 it was already 1.2 metres in circumference at the base. It’s now four metres, with the longest spur being 36.5 metres. That also makes it the largest grapevine in the world.

The average crop of black grapes is 272 Kg. Exceptionally, the 2001 harvest was the biggest crop ever, with 363 Kg. The grapes are for sale every September in the Hampton Court shops.

According to the archives, Queen Victoria had the grapes sent to the Royal Household at Windsor Castle. Edward VII then decided they should sell, by his time grapes were hardly uncommon.

There’s no record of these grapes for wine. If we use the rule of thumb that a bottle of wine needs 1-1.2 kg of grapes, it’s barely a barrel’s worth in an average year.

Meanwhile, the Great Vine has outgrown its greenhouse several times. One constructed in the early 1900s had a public viewing area. By 1969, this again needed replacing, but the vine had become so entwined in the structure that the replacement aluminium glasshouse incorporates the older iron framework within it.

The Great Vine is a variety of Vitis Vinifera species, called Schiava Grossa. This red wine variety is from the Alto Adige (Südtirol) of northern Italy. Some wine critics are unkind to Schiava. However, given the right terroir, such as in the DOCs of Santa Maddelena or Lago di Caldaro, it makes a delightful light red wine for early drinking.

Schiava Grossa also has many synonyms, the best known of which are Trollinger in Germany and Black Hamburg in Britain. As Trollinger, it’s the most planted red grape variety in the Württemburg region of Germany and probably arrived there from the Südtirol.

And perhaps that’s a reason why this variety ended up at Hampton Court. George III was, after all, a Prince of Hanover as well as King of England.

Here’s an excellent YouTube video about the Great Vine. If you visit Hampton Court, do go and see this remarkable and venerable plant. Click here.