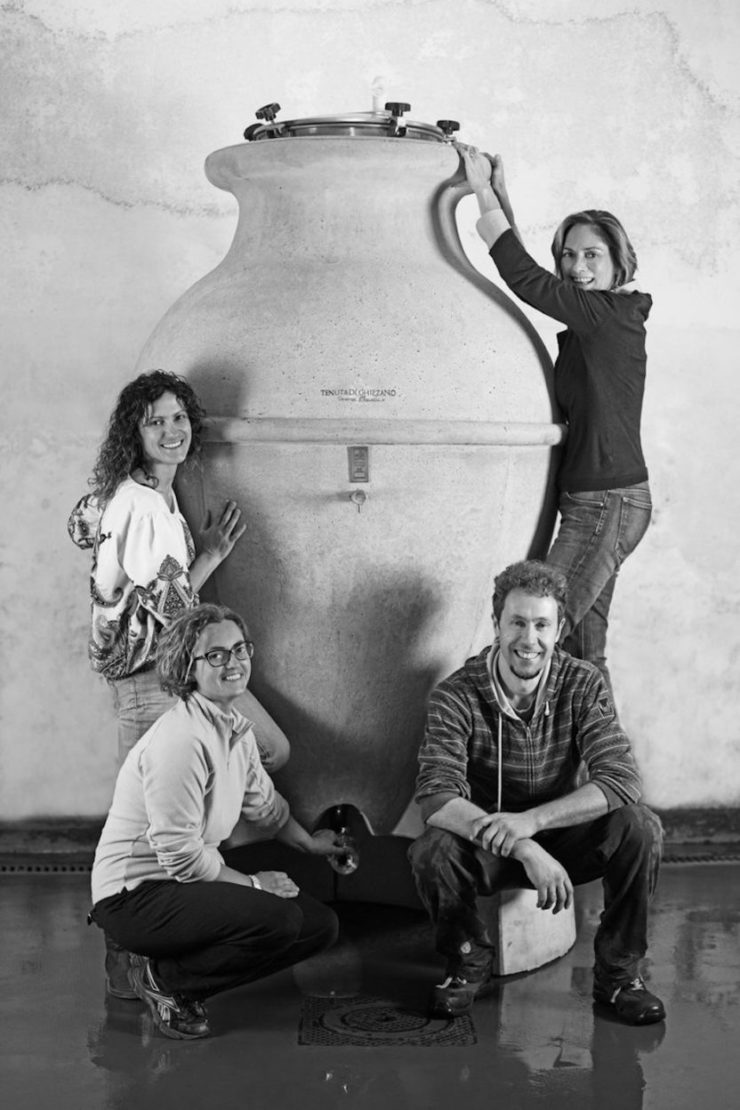 Tenuta di Ghizzano has been featured on these pages before, with two superb classically-styled red wine blends called Nambrot and Veneroso.  Their new wine project is called Mimesi, where current owner Ginevra Venerosi Pesciolini employs ancient natural wine practices in a modern context. As Confucius once said, “study the past if you want to define the future”.

Meanwhile, mimesis was an idea central to the works of the ancient Greek philosopher, Aristotle. It refers to our delight in recreating the natural world in Art and Literature. For example, have you ever thought that a painting of a flower was so realistic you could pick it or smell it?  Or has a description of a place ever made you feel you were really there?

That’s mimesis, an elusive sense of realism that’s much more than mimicry or copying. As we’ll see, it’s an apt description of Ginevra’s wine philosophy; research and master the subject, then devote yourself to its faithful realisation. Mimesis in a wine context aims to create authentic wines expressing elegance, complexity, and terroir.

The two Mimesi wines are the culmination of these ideas to date. The focus is on making monovarietal wines rather than blends from local Tuscan grapes. Vermentino is the white wine, and Sangiovese the red.

At the Tenuta, wine-growing is Biodynamic, and the winemaking involves pressing the grapes by the ancient art of foot-treading.  To these, Mimesi adds the employment of amphorae for maturation.  Using such vessels allows the micro-oxygenation necessary to mature the wine subtly without employing wood.

The Italian-made amphorae have different characteristics and hence suitabilities. Consequently, Tava makes the terracotta amphorae used for Vermentino, while Sangiovese develops in cocciopesto amphorae made by Drunk Turtle.

2020 is the first vintage of Mimesi Vermentino, using grapes from Ghizzano’s Il Mulino vineyard, planted in 2010. These were hand-picked in late August, a hot vintage.

After destemming, the grapes were cold-macerated with skin contact for 48 hours before foot-treading. Fermentation of the resultant juice is in stainless steel tanks. It was spontaneous, using natural yeasts. Kept at low temperatures, this took about a month.

The wine then matured in Tava terracotta Amphorae. These are fired at high temperatures to reduce the size of the micropores in the material and limit the amount of oxygen exchange. It means that the final wine is full-volumed, elegant, and well-balanced, without oxidative characteristics.

The wine matures on the fine lees in these vessels for five months. During this time, lees-stirring (battonage) ensures that it picks up extra complexity. At the same time, partial malolactic fermentation occurs naturally, so softening the acidity. The quantities are minute, with just 1,614 numbered bottles. A DIAM 10 cork anticipates further development if required.

Those expecting the usual Tuscan style of  Vermentino (such as from the Bolgheri or Maremma) will be surprised by Mimesi. The typical Vermentino style is a fresh pale wine with floral aromas, citrus flavours a salty minerality, making it ideal as an aperitivo or with oilier fried fish such as sardines.

Mimesi isn’t like that – instead, this is a gastronomic wine that demands food.  Firstly, it’s a deeper yellowish-green colour. Then, acacia and green herb aromas appear rather than floral notes. Thanks to the partial malolactic, it’s also much broader, rounder and longer in the mouth, bringing extra texture but retaining a precision balance. There’s a hint of tannin from the brief skin contact before an expected salty dry finish.

Hence the varietal character of Vermentino has not been obliterated but comes in a different, rich dry style. And as we accept that Chardonnay has many faces, Mimesi shows that Vermentino also has a natural malleability.

Bottle number 1,360 was opened and tasted over several days, and its stability in the presence of air meant that, unusually, it improved over time rather than deteriorating. Consider decanting or even opening a day or so ahead.

With food, the softer acidity and inclusion of light tannins mean that this wine is particularly suited to hard cheeses. For example, Summerfields Alpine (Gruyere style), Dale End Cheddar and Yorkshire Gouda are all made by Botton Creamery in North Yorkshire. These artisanal cheeses are also unpasteurised and biodynamic – so there’s also a philosophical link to the wine! As for fish, try something bold like baked Halibut. Poultry is another possibility. Creamy Risotto featuring broad beans, asparagus or peas will undoubtedly hit the spot.

This Mimesi Rosso is 100% single vineyard Sangiovese from the La Torricella vineyard, planted at Ghizzano in 1989 and one of the two oldest vineyards on the estate. The Sangiovese is handpicked, macerated, and foot trod before spontaneous fermentation with natural yeast in cement tanks.

However, the secret sauce is in the ageing –  fourteen months in amphorae and then another twelve 12 months in the bottle before release.

Experiments have shown Ghizzano that cocciopesto is the ideal material for this. Remarkably, its origins are Roman, a mix of marble, cement and terracotta. This composition makes the vessel more robust while offering oxygen exchange and thermal stability.

As an aside, this Sangiovese wine could be theoretically labelled as a Chianti DOCG Colline Pisani. However, that vast appellation is not held in such high regard despite its loftier designation. And in any case, Mimesi is stylistically unlike Chianti. Hence DOC Terre di Pisa may be relatively unknown but is small and local, with the opportunity to develop a reputation for outstanding quality.

The 2018 harvest represents the first vintage made. The growing season was well-balanced and with slow ripening. Harvest began in early September and lasted into early October.

Naked Sangiovese isn’t ever blessed with a deep colour, so the attractive ruby red of this example is impressive. Aromas are subtle and insinuating; red and black berries, black pepper, violets, leather and liquorice. All are reprised on the palate, which shows exquisite balance – iimpressive fresh acidity, smooth and unobtrusive tannins, a sweet spot of alcohol. A long dry finish adds a hint of bergamot and a mineral saltiness.

This wine Is also remarkably elegant and complex and, again, improves after opening. The impressive acidity and smooth tannins suggest that while there is no history, longevity could be for decades. Again, quantities are tiny. This was bottle 0330 0f 1,070 made.

Again, this is a gastronomic wine. A selection of Italian salumi is synergistic. For something more substantial, a slow-cooked stew of organic Herdwick mutton with dumplings is outstanding. Alternatively, try wild mushrooms on toasted sourdough.

This second vintage, 2019, is still  “en primeur,” as it was only bottled a month before tasting it in April 2022.  So it won’t be released for another 11 months. Despite this and the differences in vintage conditions, the overall impression is just how consistent and similar this 2019 is to the 2018 above.

In 2019 the grapes were left longer on the vine, picked in late October. They were sourced from La Toricella but also from Monte, their other oldest vineyard.  In other respects, the wine is made in the same way as in 2018. This bottle was number 0011 of 1,200.

It’s slightly bolder and fruitier, with a smidge more alcohol. However, these differences are small. Some will prefer 2019, but others will opt for the leaner 2018. I’m delighted by both!

These new Mimesi wines sit comfortably alongside the classic Nambrot and Veneroso red blends in the Ghizzano range. They are made with a perfectionist’s attention to detail and reflect Ginevra’s personality as well as terroir.

The Pisan wine area may not possess the fame and reputation of some of its Tuscan peers, but Tenuta di Ghizzano is nonetheless one of Tuscany’s elite wineries. Hence these exciting wines rival any of Tuscany’s legendary examples while being distinctive in their own right. These must-try wines took me straight back to Tuscany without ever leaving my home.