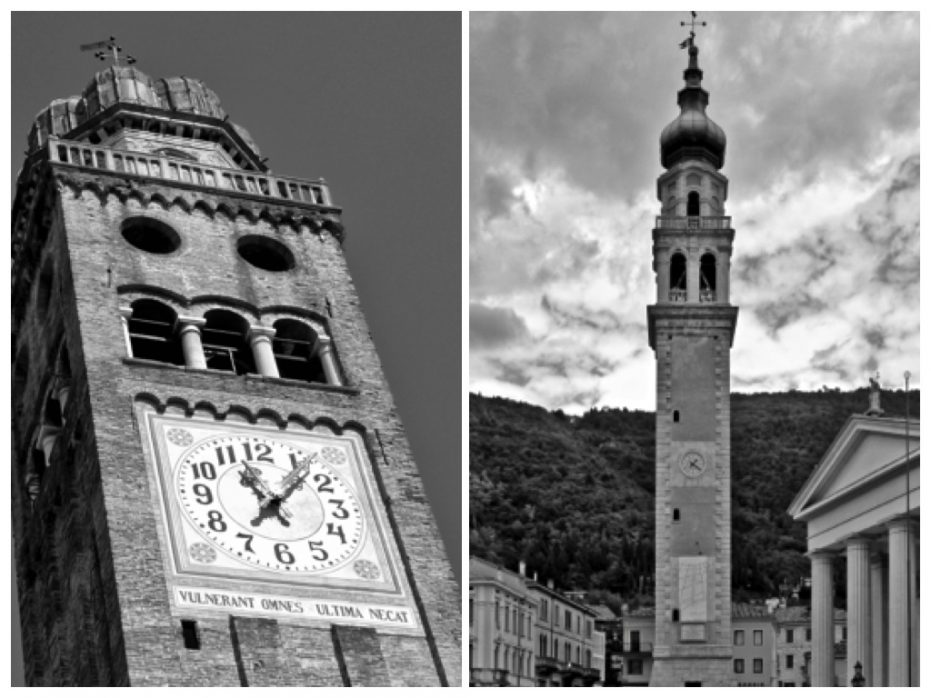 The Wines of Conegliano Valdobbiadene (Pt.2)

Part 1 of this article told the story of this DOCG and why the Prosecco from here is Superiore. Now it’s time to see if the wines to live up to that billing.

The DOCG regulations allow the sparkling Superiore to have four levels of sweetness.  The internationally-defined levels of residual sugar (RS) are Extra Brut 0-6 g/l; Brut 6-12g/l, Extra Dry 12-17 g/l, Dry 17-32 g/l.   Extra Brut is a new and welcome addition to the DOCG from 2019; Extra Dry is the most popular and traditional style. Sui Lieviti is also now recognised by the DOCG since 2019 and must always be a bone-dry Brut Nature. 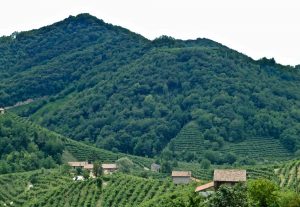 Glera must make up a minimum of 85% of the wine. In practice, it’s frequently 100%. Other authorised local grapes are optional up to 15%; Verdiso, Bianchetta Trevigiana, Perera and Glera Lunga. However, the sparkling wines (except for Cartizze) can also use authorised international varieties; Pinot Bianco, Pinot Grigio, Pinot Nero (vinified white) and Chardonnay.

Sui Lieviti bubbles are bottle fermented, but otherwise, the bubbles come from the Charmat/Martinotti method, first pioneered by Carpenè Malvoti and the Conegliano wine school in 1868.

This technique is ideal for Glera. It’s a semi-aromatic grape, and the process preserves the delicate fruit and flower aromas, rather than impart secondary yeasty notes. The process must take at least 30 days, though many producers extend this period for extra complexity from lees ageing, sometimes to 90 days and beyond – known as Charmat Lungo.

These ten wines comprise five from producers around Conegliano and five from those around Valdobbiadene. They are all top-quality, 100% Glera and 11-11.5% abv. The Consorzio chose them to represent innovation and terroir as well as different styles. These are below, in quality pyramid order; from Superiore DOCG to Rive and then Cartizze. Within those categories, the wines are then by level of residual sugar, stated in RS g/l.  All the producers make a range of styles.

All the wines here are from 2019. It was a vintage of considerable variability in temperature and rainfall patterns, featuring heavy rain and heatwaves. Still, there was ideal weather for ripening and harvest at the end of September. It’s akin to vintage conditions typical 20-30 years ago, before the impact of climate change. 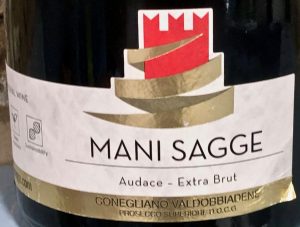 Mani Sagge is a relatively young business run by Marco Cescon, making 150,000 bottles per year. It rents vineyards planted in 1985 at Villa Gera, near the Castle of Conegliano, with 45% gradient slopes. These make artisanal and sustainable Prosecco cuvées with natural yeasts and lees ageing with a 90-day Charmat Lungo. Audace is Extra Brut, so incisively bone-dry, with no residual sugar. A pale silver with a good mousse, there’s wisteria flower aroma, then a rapier-like leesy mouthful with a stony minerality, and excellent refreshing length. Only three thousand bottles made. On this evidence, Mani Sagge is a winery to watch closely. Direct from Mani Sagge, €16.00 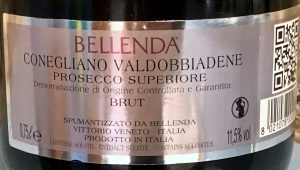 Bellenda is north of Conegliano. Their 105 hectares makes over a million bottles per year. They are into sustainable practices and have even released a Prosecco made by Metodo Classico rather than Charmat. Meanwhile, San Fermo is named after the local church and comes in the Brut style, so it’s genuinely dry. The Glera grapes here grow on gravel soils left by the retreating glaciers of the last Ice Age, leaving gentler, more rounded moraine hills. Winegrowing is sustainable, with a low-sulphur regime, and there’s lees ageing of the base wines in cement vats before the Charmat method, helping to generate fruit and floral aromas with a savoury intensity. With tiny bubbles, it’s punchy, textured and mineral, with a precision balance.  It’s also a recommendation in my Christmas 2020 wine list.  Les Caves de Pyrene, £16.45 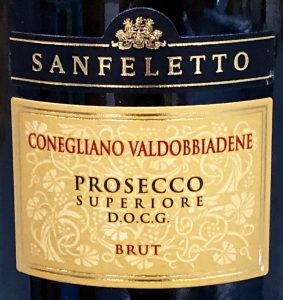 San Feletto was established in 1930 by the Ceschin family. From the Feletto hills between Conegliano and Valdobbiadene, this wine is from gentler hillsides, with hilltops of every orientation, at 200-300 metres. This area features clay soils that are high in iron content. The wine tales 50-60 days in Charmat. It’s broad, round, rich and extrovert.

Less aromatic, but compensating with a softer, fruitier palate of green apples and pear, finishing nicely dry. There’s a whiff of jasmine as it opens up in the glass for a subtle extra touch.

Terrific value for the quality on offer. Drinks and Co, £10.62 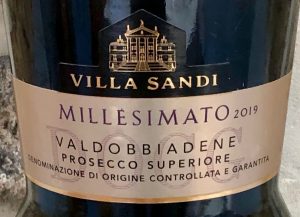 Founded in 1975, and headquartered in the nearby Asolo Superiore DOCG, Villa Sandi is a massive operation, making some 5 million bottles from 450 hectares of vines found across the Prosecco DOC and DOCGs. Millesimato is their flagship DOCG Superiore wine from Valdobbiadene. It’s a stylish ambassador for their extensive range and their winegrowing skills.

It’s light yellow, with fast bubble streams. The palate has a particular freshness and tension with just a hint of yeast, plus apple and peach fruit. It tastes drier than the stated 12g/l sugar, reflecting the well-preserved fresh acidity in the grapes. Villa Sandi is known for biodiversity too, with insect hotels and beehives in the vineyards. A brilliant introduction to the DOCG Brut style, you’ll never go wrong with Villa Sandi! Secret Bottle Shop, £15.95 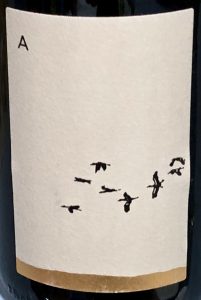 L’Antica Quercia is certified organic, with a single plot of 25 hectares in the Rive di Scomigo. Their Sui Lieviti is called A (for ancestrale) and shows off the uniqueness of this style. Despite this wine giving no clues on the front label, it’s made with natural yeasts and without sulphites used. Scomigo, being a Rive, is one of the best sites, though Sui Lieviti wine is not entitled to this designation.

The winery describes “A”  in refreshingly unusual terms, such as “Ancestral and Anarchist”, or ‘Authentic and Abstract”.  Winemaking is by cooling the fermenting must to 0°C during the first fermentation. It stops the fermentation as the yeasts become dormant. This half-finished wine has 30 g/l of sugar at this point. It’s then bottled cold in Spring and allowed to warm. As it does, the fermentation restarts and creates the bubbles in the bottle at full spumante pressure. It also leaves the wine Brut Nature, bone-dry, and the spent yeast sediment settles to the bottom of the bottle (why it’s also known as Col Fondo). You could decant the wine from the lees, but for the full impact, it’s best to mix it gently and serve it cloudy.

It’s silverish, cloudy, with steady bubbles. There are fermentation and leesy aromas rather than flowers and fruit. The palate has terrific acidity, leaving it light and zippy, with a bone-dry mineral salinity. It’s naked – with no additives, no dosage, no sulphites. Exciting wine from a small winery with a big future. Drinks and Co, £15.32 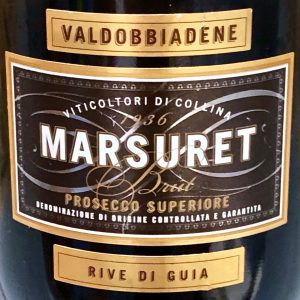 The Marsura family formed Marsuret in 1936, based in Guia and with a holding of 45 hectares scattered across this land. They make some 600,000 bottles per year. Their prestige Rive de Guia is a vineyard at 250-350 metres near Valdobbiadene, with marl soils, where the gradients can reach 80%. It’s one of the most well-preserved parts of the entire UNESCO site.

This Rive has a silverish colour, and there are particularly pronounced aromas with this wine, a mass of white flowers, possibly Iris. The palate is soft, a breadth of apples and subtle stoniness. This wine offers a silky, elegant style. It finishes crisply; dry, refreshing and clean. An excellent and authentic expression.  Wine Boutique, £14.60 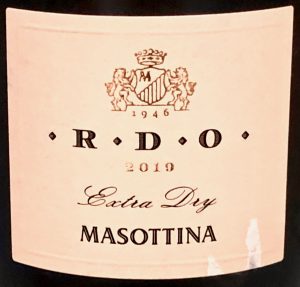 Masottina was founded in 1946 by the Dal Bianco family, with 5 hectares. Today they have access to 300 hectares of vineyards; half owned, half in partnership with growers. Production exceeds 1 million bottles per year, the various cuvées made in a modern underground and gravity-fed winery. Rive di Ogliano (R.D.O.), is north of Conegliano, with morainic soil, at around 150 metres, on rolling hills. Masottina has 1.2 hectares of old vines in this Rive that are now 40-50 years old. Their Charmat Lungo takes 90 days.

Masottina R.D.O has a minimalist front label. The words Conegliano and Valdobbiadene don’t appear, nor does Prosecco or even any reference to DOCG.

Extra Dry in style. Pale yellow, there’s plenty of wisteria and iris aroma. Masottina suggests that it also has scents of “Black Locust Flower”, with which I’m unfamiliar. Returning to firmer ground with the palate, that has apple, pear and grapefruit. The residual sugar imparts softness as well as a slight sweetness, but the excellent balance means that the sweetness remains unobtrusive. A sensual wine. Berry Brothers and Rudd, £13.60 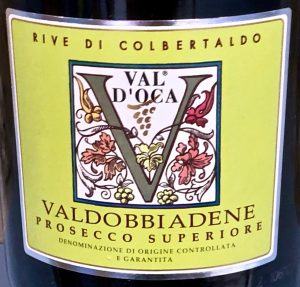 Val d’Oca is the brand name subsidiary of the Valdobbiadene Cooperative, which has 600 members and access to 700 hectares of vineyard. Production is in millions of bottles. However, being so large they also have access to grapes from many Rive subzones and are currently responsible for about 15% of the total Rive production. Rive di Colbertaldo is near Valdobbiadene. This Rive is one of the warmest in the western part of the region and claims the richest biodiversity too, with forests occupying hill-tops and valleys.

This wine has a different aromatic profile, having tropical notes such as pineapple, which also show on the palate alongside ripe apple and pear. The Extra Dry style means some sweetness, but this balances with the acidity, so there’s a long clean finish.

It shows that the best coops give nothing away in quality despite their size. A special mention too for their beautiful labelling and bottle shape – presentation does matter! The Solent Cellar, £14.99 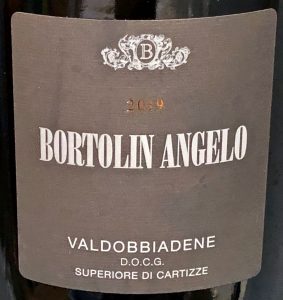 Bortolin Angelo is a small family-run business. There is more than one Bortolin family; hence the surname is first. All their wines are from Guia, near Valdobbiadene,  truly a place where viticulture is Heroic. Angelo Bortolin founded the winery in 1968, and now all their wines come in a patented bottle shape recalling twisting vines. Meanwhile, this wine is from the famous Cartizze hill, where 60 to 70-year-old vines grow on a particularly steep part, at 80% and more. Here the limestone soils are thin and sparse, yet there is always enough water. Despite a southern exposure, a breezy exposition means long, slow ripening, absence of fungal diseases and the retention of acidity in the grapes. Yet the Glera grapes here still maximise their sugar production. This example shows why Cartizze is Glera’s goldilocks zone.

The wine is the traditionally Dry style of Cartizze, and while sweeter, is leavened to some extent by the bubbles and acidity, resulting in an unforced velvet-cushion charm. The richness of this wine comes through with peach and apricot fruit to the fore. An authentic example, not currently available in the UK. Guide price €30.00. 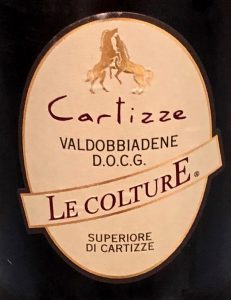 Le Colture is at Santa Stefano near Valdobbiadene makes some 750,000 bottles per year. They have 40 hectares of vines, from across the DOCG territory, including holdings at Cartizze. Again, the Cartizze hillsides are incredibly steep, and the calcareous soils here contains a great deal of pinkish magnesium, which perhaps expresses itself as a fleeting minerality in the wine. The grapes are harvested late, for super-ripeness. The Charmat period is only 30 days, probably because of the Cartizze style is about sweet fruits rather than leesy secondary additions.

There’s a little bit less gas pressure, with slow lazy bubbles, though still fully spumante – and that, alongside the residual sugar offers a remarkably silky texture. The aromas are rose and orange blossom. Then there’s a distinct tropical spectrum to the fruit, definitely pineapple, maybe lychee, which closes with a lick of honey. While the sweetest example here, it manages the trick of finishing crisply and is never cloying. Is it pillowed? It’s more like snuggling under a duvet! Corney & Barrow £24.50