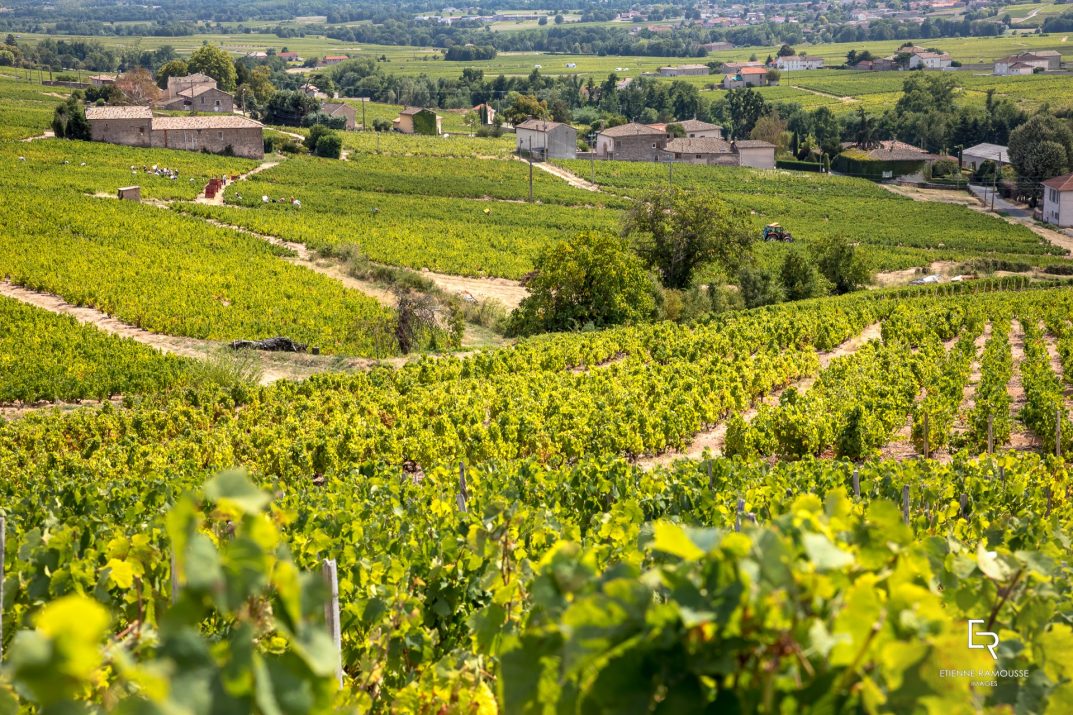 Beaujolais part 1 was mostly a love letter to the region where my wine journey started. This part 2 is Three Colours Red. It covers the three main divisions, namely Beaujolais, Beaujolais-Villages, and four of the ten Beaujolais crus. There is a wine recommendation for each one, from encounters over the past couple of years. Then, part 3, More Beaujolais Pleasures, finishes things off, featuring the remaining six crus and adding some food-matching suggestions.

Gamay Noir à jus Blanc is the grape variety. It covers 98% of Beaujolais. There is a little Chardonnay (and Aligote for now) in white, but Beaujolais is essentially a monocépage. Gamay is viewed as a humble grape, especially by outsiders. It’s certainly without the nobility of Pinot Noir or Syrah. But that doesn’t mean it can’t make great wines. Gamay makes wine that has red wine flavours and massive purplish colour, yet with a white wine texture of low tannin and fresh acidity. That makes it able to appeal to both white and red wine drinkers and is good with food too. Those properties are as smart as they are unusual. You can even chill it. In the right hands, it makes a smiling wine of wonderful enjoyment and conviviality, or a more brooding serious version capable of ageing and longevity.

Many producers are tiny family affairs, some still work on a sharecropping basis, while others sell their wines to a negociant or the local coop. Many have holdings in more than one area so you get a chance to compare and contrast wines knowing that they’ve been made in a similar way. And the co-operatives are always great places to taste, learn and buy. There’s probably much more high-quality Beaujolais now than ever before – investment in better equipment skills and training have seen to that. However, they’ve not usurped traditions, rather they’ve augmented them. Plus ça change. 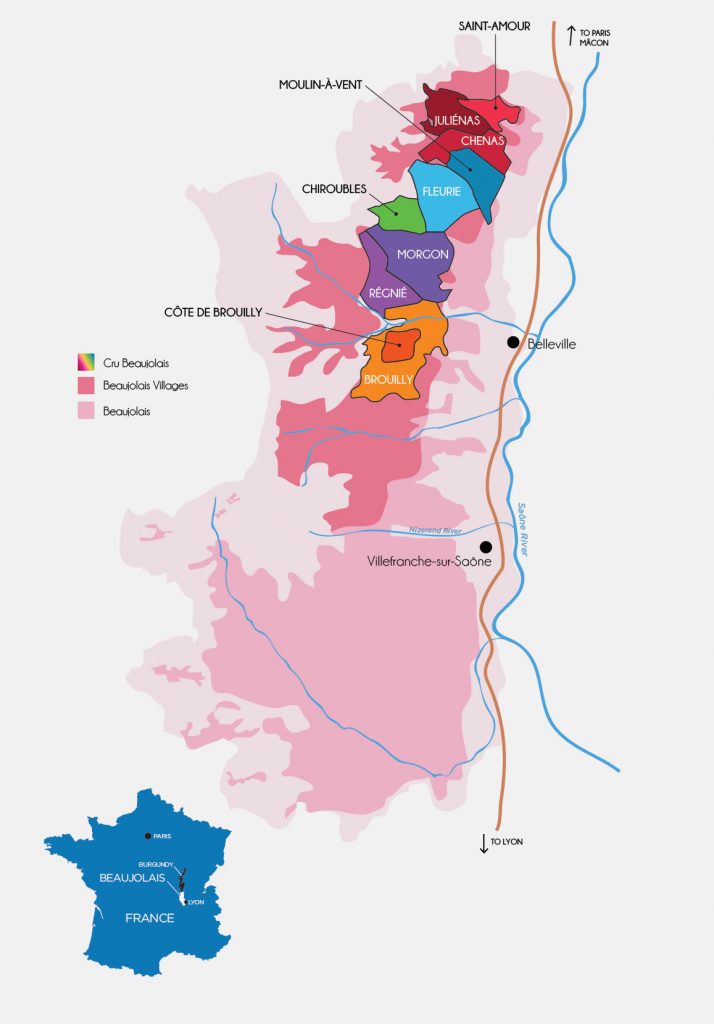 The entire region of Beaujolais has three simple divisions; Three Colours Red, if you will.

The humblest is just called Beaujolais, mostly in the south. Beaujolais-villages is to the north of this with a step-up in quality wines. Finally, there are the ten individually named Beaujolais crus in the northern part of the region. These crus make the best wines.

There are 2,714 producers and a further 1,947 growers that supply 9 co-operatives and 197 negociants. The UK is the third-largest export market behind the USA and Japan, and we took 4.7 million bottles in 2018.

4,724 hectares and over 35 million bottles per year. Beaujolais is the vast southernmost part of the region (Bas-Beaujolais), made mostly of limestone (called Pierre-dorées) that stretches south almost to Lyon.

This is often the flatter land, a historical expansion zone to slake French demand. There are often high yields, machine harvesting, and heavy clay soils which are cold.

There is a Superiéure, with slightly more alcohol but nothing more – hardly difficult to achieve in these days of climate change.

In the past, changing fortunes meant vast overproduction where a lot of wine went straight to distillation.

This is also the principal source of the popular Beaujolais Nouveau, with a further 22 million bottles of this embryonic wine made, redolent of pear-drops, banana and bubblegum. That’s around 20% of all Beaujolais made. It’s always released on the third Thursday of  November following the harvest, regardless of vintage timing, so this wine may be less than six weeks old. Nouveau is good for cash-flow, if less so for the palate. In the UK, Nouveau does not enjoy the popularity of yesteryear but its still a huge event in many places such as Japan, as well as in the bars and cafes of Paris.

There is Beaujolais blanc and rosé too. The appellation still doesn’t cater for a sparkling Beaujolais, which means Beaujolais is missing an opportunity for a sharply priced off-dry sparkling rosé. Prosecco really would have a challenger then, especially as Prosecco Rosé is legal from 2020. Meanwhile, a few producers and co-ops are making fizz anyway – check out Jean-Paul Thévenet’s gluggable On Pète La Soif, 2017 from Roberson at £15.99.

As in so many regions, the producer name is the best guide to excellence, meaning that a well made Beaujolais is still a thing to love. Here’s one:

This is from a large cooperative formed in 1929 near the town of Belleville. Co-ops are vital sources in Beaujolais for wines at all levels. This has the typical vibrant purple colour, raspberry and strawberry aromas and fruit. Yet it’s also full, soft and rounded, with good persistence. Uncomplicated yet a highly satisfying and delicious quaffer. This wine is the real thing – a joyous experience that punches well above its weight and good value too!

Beaujolais-Villages occupies the northern half of the region, the Haut-Beaujolais, where the hills are steeper and granitic, the soils lighter and warmer and yields lower. This is also the land of the classic satirical novel, Clochemerle. There are 3,828  hectares and 25 million bottles per year, (and a smaller amount of Nouveau). Hence generally, the wines are riper, with more natural alcohol, fruit and complexity. The best of these wines from specific sites can rival many of the cru wines, though many examples are blends of different places in the appellation.

Jean-Marc Burgaud started in 1989 and is one of the stars of Beaujolais. He works organically but is not certified. His Beaujolais-Villages is site-specific, coming from five hectares at Château Thulon in the village of Lantignié, where the vines are 50 years old. Made in the traditional Beaujolais way and with five months maturation in cement tanks, this explosive wine is the equal of many a cru. Cherry and mulberry fruit, great freshness, while something savoury or meaty lurks below and enough tannins for a three-year lifespan. A cru-quality wine but Lantignié is outside their boundaries.

There are ten Beaujolais crus. These occupy a sea of the best hilly vineyards carved out from the Beaujolais-Villages, in the granitic northern part of the region. In total there is 5,940 hectares and some 39 million bottles per year. Only red wine can qualify for cru status. In poor harvests, some wines may be downgraded to protect cru quality status. It’s here that the world’s best Gamay grows, thanks to its famous affinity with acidic granite soils. These crus are what Hugh Johnson calls the “aristocrats”, each with their own terroirs and expressions.  Oddly, you’ll see the cru name on the label yet usually the word Beaujolais is missing. That can be really confusing, so knowing the names of the ten crus is necessary.

Starting in the north at the edge of the Mâcon region in Burgundy is Saint-Amour.  From here, head south to Juliénas, which straddles the Burgundy/Rhône border. Continuing south comes Chénas, then Moulin-à-Vent, Fleurie, Chiroubles, before Morgon and Régnié. Finally, the southernmost crus; Côte de Brouilly and Brouilly. Many producers have holdings in more than one of the cru, so comparisons between them are easily made.

243 hectares and 1.5 million bottles make Chénas the smallest cru, named after the forests that once covered this part of Beaujolais. Aromas are said to typically be of wild roses.

Dominic Piron has deep family roots in his native Morgon, but he also knows how to do something special with nearby Chénas, which is made in partnership with Christian Lameloise. 30% of the wine gets matured in oak barrels to bring a rounder elegance. Lilly and peony aromas, a definite saline minerality underpinning the red fruit. Nicely balanced and with some tannic tension. One to keep for a little longer, then 3-5 years.

Named after Julius Caesar, this is the cru with the greatest soil diversity; granite and bluestone, sands and clays all feature in spots. There are 573 hectares and 3 million bottles. Some wines are more tannic and require some bottle ageing to smooth out the edges – well worth the wait.

This winemaker owns no vines. Instead, he rents a number of small parcels across Beaujolais, concentrating on old vines. The wine matures on the lees for 6-9 months in old 228-litre barrels, then bottled unfiltered, with minimal sulphur. The result is a stylish juicy purplish wine with balance, silky texture and a mouthful of red fruits. Enough here to last 3-4 years easily.

637 hectares and 4 million bottles. Moulin-à-Vent is possibly the most famous Beaujolais cru, named after the windmill (now restored) that still stands on a hillside near the town of Romanèche-Thorins. Vignerons say that it’s the manganese in the soils that produce tannic and powerful wines capable of ageing up to a decade. Often matured in oak (look for elevage en fûts de chêne on the label), this might just be the most prestigious cru.

Albert Bichot is based in Burgundy, at Beaune, with a large estate and a negociant business. In 2014, they bought Domaine de Rochegrès, allowing the domaine to continue to make the wines unchanged. This single-vineyard has of 80-100-year-old vines on the pink granite hills located on the west side of the cru. 2016 was an excellent vintage and the style made here is Burgundian. There’s destemming and maturation having 50% in vat and 50% in old barrels for 10-12 months so the wine isn’t over-tannic, not usually a problem in Beaujolais! Perhaps it is the manganese.  The result is inky dark, with aromas of violets. It has opulent black cherry and liquorice fruit and a little extra spice from the wood maturation. A classic that is still improving.

828 hectares, 5.5 million bottles and an easily remembered name. Pink granite,  a delightful town square and the famous panoramic hill of La Madone. All these make Fleurie memorable. Good job the wines are up to it too. Expect floral aromatics (just like the name), elegance and silkiness.

The Graillot family bought this Beaujolais domaine to add to their existing estate at Crozes-Hermitage in the Northern Rhône. This example is from a higher altitude site in a subzone of Fleurie, and an excellent vintage too. Farmed biodynamically. Red wax seal over the cork, not a capsule. Crimson-coloured. Big on the aromatics, as a Fleurie should be. The palate is now super-soft, tannins all melted away leaving with sour cherry and raspberry fruit. Well-balanced fruit, alcohol and acidity, long finish. More-ish and drinking now. Watch out for a little sediment – decant or pour carefully.

To part 3, More Beaujolais Pleasures, for the other six Beaujolais cru and food matching suggestions.