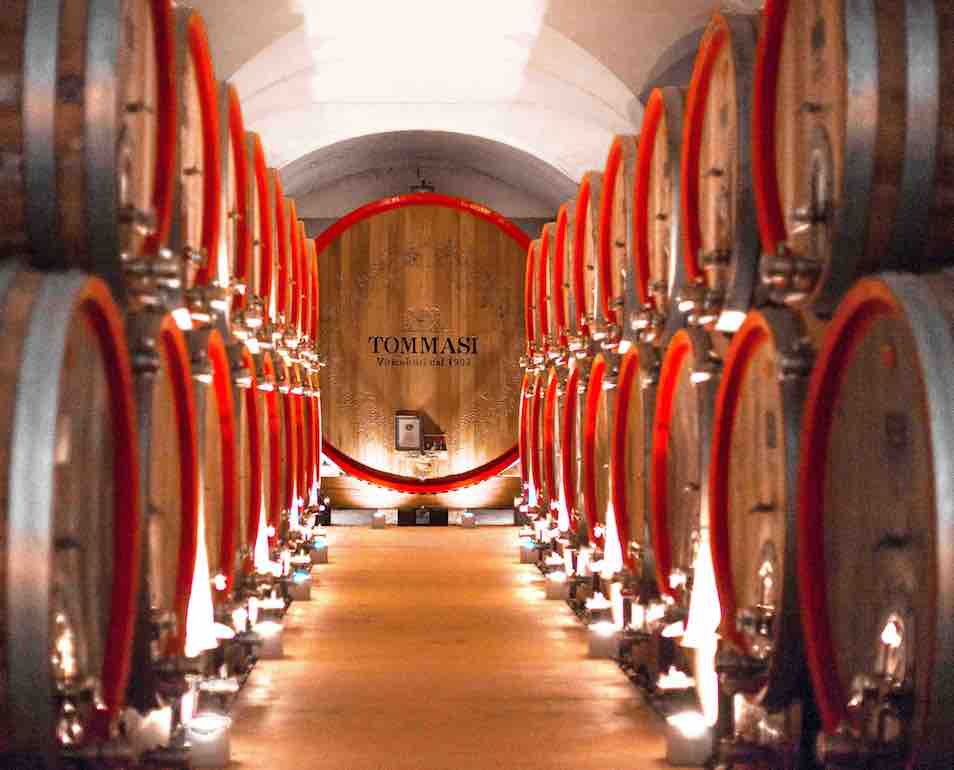 Back in July 2021, I wrote about Le Fornaci. a Lugana DOC white wine made by Tommasi. Tommasi is famous for two outstanding red wines from Valpolicella Classico, benchmarks of their contrasting styles. Their Amarone originated in 1959, while their Valpolicella Ripasso started in 1995.

These red wines rely on drying the fresh grapes, but they originate in very different ways. Amarone uses the appassimento method, drying the fresh grapes, so they lose water and concentrate sugars. This process is also a metamorphosis because it also creates new aromas and flavours. After the grapes dry over winter, their fermentation creates Amarone – a robust red wine that needs extensive maturation.

In contrast, the Ripasso method uses the pomace left over from the finished Amarone fermentation. This pomace comprises the remains of the grape skins, which are still full of yeast and sugars, which now augment a freshly made Valpolicella red wine. Thus, the pomace induces a second wine fermentation that adds more alcohol, richness and complexity, a kind of turbo-charging, if you will.

A more detailed explanation of these two methods, both perfected in Valpolicella, can be found in this previous article.  Suffice to say that outstanding wines result when these techniques are carefully employed, such as at Tommasi. Indeed, these two wines and the styles they represent have now become immensely popular worldwide. So here they are in more detail.

Over winter, the grapes are dried for 100 days on bamboo mats (arele) in a ventilated loft and lose 40% of their weight through water loss. Fermentation is then in stainless steel for 25 days. Maturation is for a minimum of 3 years (one year longer than the DOCG minimum) and always takes place in large inert Slavonian oak casks of 3,500 and 6.500 litres, which impart no wood flavours.

A dense ruby colour, the nose is dominated by fresh scents of ripe cherry, blackberry and blueberry. The palate is drier than many examples, with lower residual sugar and has that classic Amarone mouthfeel: a glycerine-smoothness and silky-softness bringing an enveloping texture, without any tannic harshness.  Overall, there’s an impressive balance of acidity, alcohol, tannin and fruit weight. While the alcohol level is a full 15%, it’s lighter and more agile than many peers.

This elegance also means it avoids heaviness and spirity warmth. Instead, fruit flavours dominate, following the scents of berry and cherry, all underpinned by a savoury balsamic note, and without any hint of botrytis from the dried grapes. There’s then a long slow fade before it finishes cleanly with an attractive, slightly bitter note that’s a hallmark of the Amarone style. In short, this is a more traditionally styled example of the breed, which shows elegance, restraint and drinkability. However, it’s still primary fruit-dominated at this relatively early stage of its long life.

In short, it’s not a blockbuster style of Amarone, so it avoids alcoholic heat and sweetness, elements that too often (in my opinion) spoil the Amarone experience. Decanted for 30-40 minutes beforehand, this is a wine that is drinking well now at five years old but will also develop much more complexity over the decades to come. If you want to delve deeper into Amarone, this wine is an excellent benchmark. It’s also good value, especially given the care taken over all aspects of a lengthy and expensive production method.

Widely available, including The Drink Shop, Waitrose and Valvona & Crolla,  £39.99

The usual recommendation is to go large during mid-winter with a hearty rib-sticking stew. Alternatively, take a glass on its own for contemplation or to accompany a good book. However, it’s more versatile than that. A plate of salumi (cured meats such as Bresaola, Finocchio Salami and Pepperoni) accompanied by pungent parmesan shavings will make a perfect repast. Or drink it after a meal with some blue cheese as a lighter alternative to Port.

If you enjoyed the 2016, you’ll find the 2018  remarkably consistent in composition, style, and flavour. In other words, see above! Indeed, the Tommasi philosophy with this cuvée of Amarone is that it’s a Brand, that it should be as good a wine as possible but one that offers consistency to customers year after year. In other words, if you like the wine, you can always expect it to be very similar regardless of vintage variation – it has a recognisable House Style akin to what you might expect from a Champagne House. You need to be a fairly large winery to grow sufficient quantities of grapes to iron out variations in this way, plus have the blending skills, but the reward for reliability is customer loyalty and repeat purchases, no mean feat with an expensive luxury wine. Only in 2014 were vintage conditions so bad that Tommasi didn’t make the wine at all.

With its dark blue label, the watchword here is restraint. Yes, the Ripasso method adds alcohol, body and complexity to the Valpolicella base wine. But it’s done in a way that the additions remain balanced, creating a subtle and elegant wine that’s terrific with food. It isn’t a “mini-Amarone” and is all the better for that.

A dense ruby colour, lighter than the Amarone,  while the nose has more immediate spice and pepper notes alongside the expected red and black cherry scents. Those features carry over onto the palate, marked by silken tannins and hints of tobacco on a long fade.

Tommasi’s Ripasso offers an authentic halfway house between the naturally lighter and fresher Valpolicella and the powerful and complex Amarone. It’s drinking perfectly now and over the next five years or more. But, again, it’s a benchmark for the style.

Mushroom Risotto. Ragù with pasta or polenta, grilled and charred meats and vegetables. Or try that plate of salumi and parmesan!

My thanks to Pierangelo Tommasi for providing me with complete background details about these wines.