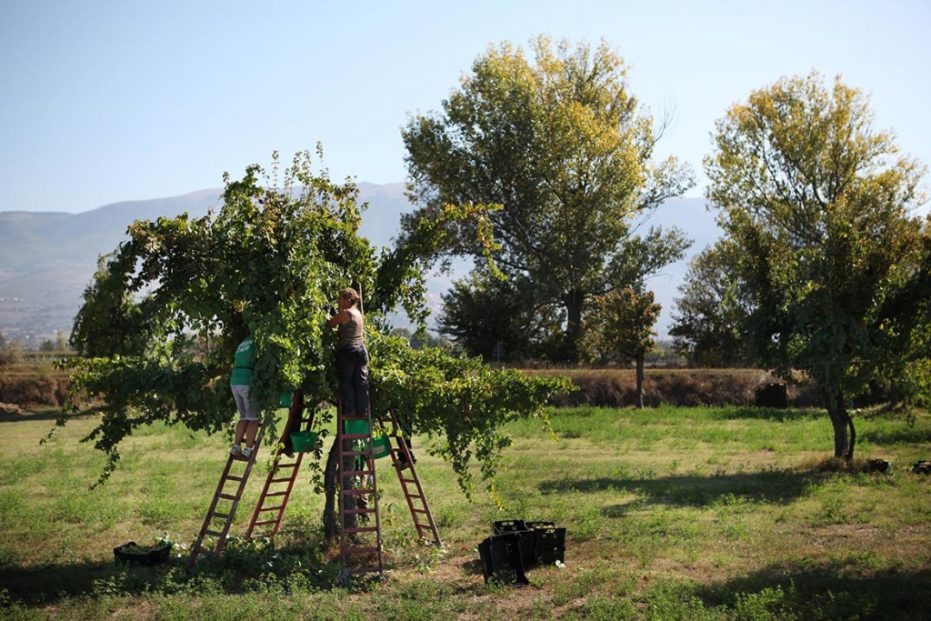 I say Spoletino; you say Trebbiano. Let’s call the whole thing off.*

In Umbria, there resides a brilliant yet still obscure white grape variety, called Trebbiano Spoletino. It grows around the hilltop towns of Montefalco and neighbouring Spoleto, near Perugia.

What’s in a name? Yes, the name Trebbiano does it no favours. Trebbiano covers a whole host of Italian white grape varieties, yet many of these are unrelated to one another. Unfortunately, Trebbiano is a catch-all name that’s synonymous with vast quantities of mediocre and dull white wines. Blame Trebbiano Toscana, aka France’s Ugni Blanc for that.

Trebbiano has many faces

Nonetheless, Trebbiano has many faces. Hence there are exceptions to the dull Trebbiano rule that can make exciting and distinctive wines. The first is the Marche’s Verdicchio, which also happens to be the Trebbiano found in Soave and Lugana. The second is Trebbiano Abruzzese that makes Trebbiano d’Abruzzo. The third is undoubtedly Trebbiano Spoletino. These three grapes are not genetically related, either to each other or any other Trebbiano varieties.

In Umbria, Trebbiano Spoletino’s popularity has increased dramatically over the last decade. In that period, monovarietal wines started to appear.  This variety was known in the nineteenth century, though other grape varieties then displaced much of it. However, it’s now back again in the vineyards of many Montefalco producers. Some older remnants are still trained to grow up fruit trees!

Ten years ago, only five wineries grew Spoletino. Now it’s twenty-three, with perhaps 60 hectares under vine. It’s still a tiny amount. However, this recent upturn in fortunes is remarkably similar to the beginning of the dry red Sagrantino revival.

Spoletino is on the cusp. It’s moving from a wine of limited novelty value towards becoming a great Italian white wine. And if anybody knows how to transform an obscure grape into a world-beater, it’s the winegrowers of Montefalco. After all, they have the Sagrantino experience to draw on, are skilled winegrowers and already have an international distribution network.

Changes are happening. In 2016, Montefalco DOC rules increased the amount of Trebbiano Spoletino in the Montefalco Bianco DOC blend. Instead of 20-35%, it’s now a minimum of 50%. Over the past decade, more and more monovarietal wines have appeared.

There is no DOC for a 100% Spoletino in Montefalco. Perhaps this could change as the Spoletino revival takes off. However, the neighbouring Spoleto DOC allows a 100% Spoletino. Consequently, some Montelfalco producers are now using this in preference to IGT.

There is also a desire by some producers to change the Trebbiano Spoletino name, to just Spoletino. That would help distance it from the negative connotations that Trebbiano has, so forging a distinct local identity. That’s why I say Spoletino; you say Trebbiano. A name change would be beneficial, but just as pressing is the creation of a recognisable wine style.

During a recent visit to Montefalco, I tasted 100% Spoletino wines for the first time. They seemed to fall into two camps. Some were reminiscent of light, crisp and lemony Sauvignon Blanc, with a powerful aroma. However, my preference was for those that were less aromatic and instead full-bodied, deeply coloured and full flavoured. Those have peach and tropical flavours to the fore, and sometimes an underlying balsamic complexity. For me, this latter style is far more unique. It’s also suggestive of longevity and further development in bottle.

I attributed these differences to the revival still being young; one dominant style has not yet emerged. Ian d’Agata, an authority on the native grapes of Italy, thinks otherwise. He suggests that those lightweight aromatic versions may not be Spoletino after all. Perhaps this puzzle will resolve as DNA research continues. For the moment, it seems to me that those producers making the fuller version of Spoletino are the real deal.

The vineyard area of Montefalco snowballed because of the recent fame of the dry red Montefalco Sagrantino. Hence the other quality wines made here have been second fiddle. However, in my opinion, Spoletino’s time is surely coming. In future, Montefalco could become known for exceptional reds and whites.

In this context, below are the best examples of Spoletino that I have encountered. There will be others, but all these come heartily recommended!

Antonelli was one of the first Montefalco producers to rediscover Spoletino, in 2007. One of the oldest wineries in the area, their vineyards have been organically certified since 2012. This wine ferments in big old oak casks. Then it’s left on the lees for at least six months, with a further six months ageing in bottle. Trebium is lime coloured with hints of white flowers on the nose. Peach and nectarine flavours, where crisp, racy acidity balances the savoury richness, creating a lovely buttery texture. Long finish and no oak taste. Gambero Rosso Tre Bicchieri. Jeroboams, £15.99.

If you like this, then their Anteprima Tonda 2016 DOC Spoleto is a revelation. More experimental, it’s a single vineyard wine made and matured in Amphora. This one is a golden colour (it’s not an orange wine), with a little tannin from skin contact adding texture. There are figs, nectarine and a hint of dried apple. Less silken and a touch volatile but with buckets of personality. Jeroboams, £24.99.

Perticaia was established in 2000 and have four hectares of Spoletino.  The house style is all about silken elegance. The grapes are whole bunch pressed under nitrogen to ensure no oxidation of the juice. Fermentation is with natural yeasts in stainless steel. The wine then ages on the lees for six months, before bottling without fining or filtration. A vibrant lemon-lime colour, this is full-bodied with lip-smacking acidity. Peach fruit with a note of oregano. Elegance and finesse, and will improve over four to five years.  La Vino, Halifax, £17.50 (£15.50 in a mixed 6).

Perticaia also makes a single vineyard wine called Del Posto, Spoleto DOC. This wine gets twelve months on the lees and six months in bottle. Again, it sees no wood. It seems a much bigger, fuller version yet it’s half a degree lighter in alcohol. Even more finesse and a streak of chalky minerality with a hint of smoke on the nose add complexity. Years of development ahead. N/A UK

B&G are new kids on the block but have old vineyards. This Spoleto is their top line selection. Older vintages were labelled IGT, but 2017 is a Spoleto DOC. Previously, this was made entirely in stainless steel. However, 2017 has 10% made in old barrels, which adds a little more finesse. Golden green, this has softer acidity, green-gold hints and pineapple with the peach and apple fruit. Nitrogen is used to prevent oxidation at pressing and bottling. Terrific wine, best kept for a couple of years. Tannico, £15.89.

Tabarrini’s Spoletino is from ungrafted vines, planted in 1920. They grow up fruit trees in a kind of primitive pergola. This wine ferments in stainless steel with natural yeasts. It then sits on the lees for 12 months. Following this, there is a further six months maturation in bottle. It’s a low-sulphur regime too. It’s a wine that demonstrates great longevity and evolution. Excellent when young, it sings with bottle age, revealing new nuances with each passing year. Leave this wine to mature for as long as possible, or purchase the oldest you can.

There’s a massive mouthful of fruit; quince, apricot, and ginger cut with a little pineapple. Over time, you’ll get honey and butterscotch. Warmer years evolve Riesling-like kerosene aromatics; cooler vintages tend to be smokier. All have intensity, freshness and silky texture. These characteristics make Adarmando an exceptional wine in every way, and I’ve made it my Wine of the Year for 2018.  2014 is at Uncorked, London £24.95. Meanwhile, 2013 is at Raeburn, Edinburgh for £17.99.

Food-wise, try carpaccio, mushrooms, or white meats such as chicken or pork. Saffron risotto is a delicious match.  Fritto Misto and Moules Frites hit the spot too. I found the Tabarrini Armando brilliant with scrambled eggs covered in black truffle shavings.

One day, Spoletino may be as famous as the red Sagrantino. It seems to be on the same trajectory as Sagrantino was a decade or so ago. Time will tell, but meanwhile, there are already superb examples. I commend them to you.

Let’s call the calling off, off.*

*With apologies to George Gershwin.

There are also reviews of Spoletino from other parts of Umbria here  and here.