Most of the time, it’s the wine itself that inspires the desire for writing about it. However, at other times inspiration comes courtesy of an entirely different subject. This time is one such, where Art has inspired the desire to write about a less well-known and unique Spanish white wine called Txakoli.

The painting shown above is The Drunkard, Zarauz. I think it’s a marvellous and compassionate depiction of drunkenness. In addition, the companions of the central figure also have a distinct air of predatory menace about them.  It’s superb social realism and was sketched “live” by a Valèncian artist called Joaquín Sorolla y Bastida, in 1910.

Britain has mostly forgotten about Sorolla. Yet at his London exhibition in 1908, his billing was as ‘the world’s greatest living painter”. Hyperbole perhaps but there’s no doubting the talent on show here. This picture recently made the news in 2019 when the National Gallery bought it.

Meanwhile, Zarauz is the Spanish spelling of Zarautz. A small town on the north coast of Spain, Zarautz lies between the twin tourist destinations of Bilbao and Saint Sebastián (Donostia). Bilbao is a large port-city now famous for the iconic Guggenheim museum, while San Sebastián is known for its culture and gastronomy. Welcome to the Pais Vasco, which we know in Britain as the Basque Country. Zarautz (Basque spelling) is a holiday destination, a mecca for surfers, and a wine town.

So this painting got me thinking, is that white wine in the bottle in the picture? And if so, what is it? Granted, it could be cider instead, but I’ll happily speculate. The painting is in Zarautz, inside a kind of popular local tavern known as a Chacoline. There’s a postcard from Bilbao of a Chacoline shown below which offers a further clue or two.

In these parts, the local wine is Txakoli (pronounced chac-o-lee). Zarautz is part of the small wine DO Getariako Txakolina, (aka Txakoli de Getaria, aka Chacolí de Guetaria). It’s one of the three small Txakoli wine regions in the Pais Vasco. It was also the first of the three to receive DO status in 1990. It underwent further expansion in 2007.

In turn, about 85% of all Txakoli is from a white grape variety called Honderribi Zuri*. It’s found virtually nowhere else, apart from over the nearby French border, where it’s thought by some to be the Courbu Blanc of Irouléguy AC.

Another grape variety, this time red, is also grown, called Honderribi Belza. That isn’t related to Zuri and might be a form of Cabernet Franc. Consequently, while Txakoli production is predominantly white wine, there is also a little red and rosé as well. Other varieties that can be in Txakoli are all white, with French origins: Folle Blanche, Petit Manseng, Petit Courbu and Gros Manseng. 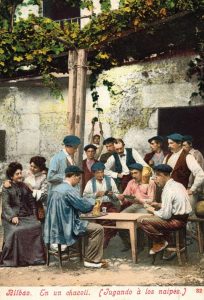 Bilbao Postcard. Outside a Chacoline, playing cards. The Txakoli served is red.

This part of Spain has an oceanic climate. The Bay of Biscay is known for its storms and rainfall is plentiful, even in summer, making the land extraordinarily green and verdant. There’s as much annual rainfall in these parts as at Malham Tarn in the Yorkshire Dales!  That rain makes growing grapes challenging, not least because of humidity and fungal diseases. Hence the vines are usually grown high up on pergolas. These shelter the grapes from the rain and encourage drying airflow from offshore breezes. The typically steep and mountainous slopes also promote water run-off.

In Getariako there’s been an amazing Txakoli revival. Once there were a thousand hectares of vines along this coast. On a steady decline throughout the 20th century, by 1982 there were only 21 hectares left, with just three ha at Zarautz. Now the DO covers 433 hectares**, the wines are available in the UK, and their quality has probably never been better.

So Txakoli is a wine that’s usually white. It’s sold young and often has a spritz. This is because of bottling it while some fermentation CO2 gas is still present. In the past, it’s most memorable aspect was searing acidity, a thin crab-apple tartness. These days, especially since the DO, improving viticulture and vinification techniques allow winegrowers to make far better and toothsome wines without losing the malic crispness that is a defining hallmark.

Hence a typical Txakoli is a greenish-yellow colour, bone dry, with crisp high acidity. Alcohol is low at around 10.5%. There will be some spritz prickle on the tongue. Flavours are grapey (that’s unusual to find grapes as a fruit in wine), plus apple and pear. Perhaps it tastes of the sea. Think Muscadet or Vinho Verde as comparisons on a similar spectrum.

Here are four good examples of Txakoli to try:

In the Pais Vasco, seafood rules and Txakoli is an ideal partner. So popular cuisine includes a tuna fish stew called Marmitako, plus fresh crabs, lobster and most other shellfish. Try Pintxos, tapas-like bar snacks featuring anchovies, sardines, hake, cod and tuna, skewered onto fresh bread. Closer to home, anything battered and fried is brilliant, from fish and chips to onion rings. Further afield, Japanese sushi/sashimi makes for an excellent fusion experience. Also, try asparagus, while Txakoli is one of the few wines that can withstand artichokes.

The National Gallery might challenge me about Txakoli, as on their website they suggest that the drink in Sorolla’s painting is cider, though they do not offer any explanation or evidence. Basque cider has always been a backbone of Basque history, culture and cuisine. And by 1910, the ravages of Phylloxera had doubtless hit the vineyards. So local cider could easily be a candidate. However, on balance, I’ll stick with it being Txakoli unless further evidence emerges to the contrary.

Though I missed the Sorolla exhibition at the National Gallery in 2019, I’m looking forward to seeing this painting hung in its new permanent home. That’s in Room 41 once it re-opens, post Covid-19. Afterwards, I’ll go and get a glass or two of Txakoli to celebrate!

Click above to see Zarautz on a map. There’s more about Getariako Txakolina DO here.