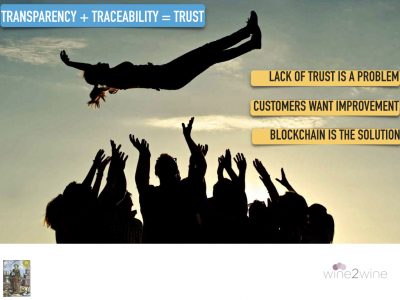 Part 3 took a look at wine frauds. Because of wine and food scandals, consumers distrust the system and are increasingly demanding traceability & transparency about food and wine. In wine, this ideally needs to exist all the way from grape 2 glass.

As you know, we now have lots of complicated wine standards, regulations, checks and certifications. These have evolved over many years. These are designed to protect wine producers and consumers.

For example, if I buy an Amarone, I want to know that it was made in Valpolicella. I also want to trust that it meets or exceeds DOCG quality. And I want it in perfect condition, just as the producer intended.

Research suggests that consumers are highly sensitive about trust.

First, 45% of Chinese grocery buyers say safety is now their primary concern. The Chinese wine and food market has been particularly vulnerable to fakes. Some estimate that 75% of imported wine in China is counterfeit. That market is also awash with “lookalike” wines resembling genuine brands, ready to trip up the unwary.

Second, Mintel identifies consumer distrust of regulations, manufacturers and retailers because of past scandals. Mintel says “Full disclosure” is one of the five most significant global consumer trends in 2018.

Third, a UK Government survey by DEFRA found that 74% of consumers want to see proven traceability. That expectation is not being met.

Consumer trust is a major issue in many wine markets. So let’s return to applying the Blockchain as the solution for building consumer trust. 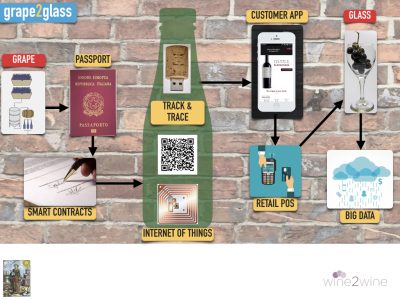 Using the Blockchain from grape2glass

The Blockchain is a foundational technology. It can also integrate other new technologies that are becoming commonplace. These are needed to guarantee authenticity down the supply chain to the consumer.

These include Smart Contracts, the Internet of Things, Big Data and the Internet Cloud. Now I’m going to show how the Blockchain can guarantee wine credentials and increase trust.

Verifying wine starts in the vineyard. Real-time data is collected from ground sensors, drones and weather stations. Details about the farm, the grapes and treatments can be added, as can certifications.

In the winery, sensors verify wine production; fermentation, legally allowed additives, blending, maturation and bottling/packaging. It can also include chemical analysis and Isotopic testing. All this data creates a passport that proves wine quality, safety and origins. Now add this to the Blockchain as the “genesis transaction”. You now have a clear and unchangeable record of how and where the wine was made and what it contains. Voila, you have created a digital wine identity.

Now you have to maintain and safeguard that identity all the way to the consumer.

The wine sells by using Smart Contracts run by the Blockchain. These are automated, legally binding and self-executing deals, originally developed by the Blockchain platform called Ethereum. They auto-complete complicated paperwork too, e.g., for laborious cross-border transactions. That means transactions become frictionless and save costs and time.  As an example, Anheuser-Busch In-Bev will save millions by adopting a Blockchain pilot scheme for exporting their beer using Kuehne + Nagel, and you can read about that here.

Any further ownership changes use smart contracts in the same way. Commercially sensitive information like pricing, credit information and terms can remain private to the parties involved.

Standard QR codes, barcodes, RFID tags or NFC readers can then track the product through the supply chain. Their collected data adds to the Passport on the Blockchain, and now you’ve got a traceable distribution history. These trackers are cheap and already in widespread use by the logistics and storage industries.

The Internet of Things (IoT)

However, the existing trackers aren’t a perfect solution because tampering can still occur. Some current solutions are harder to break or fake than others, so they may still be appropriate. However, the Internet of Things enables “smart beacons” inside the bottle. They can be under the capsule or embedded in the screwcap or cork. Any alteration to them would result in destruction. They can also actively monitor the wine’s condition as it moves through distribution and storage, as a quality assurance device. Patents already exist for these, so I expect them to appear in the short-term. I think the existing methods would still be suitable for lower value or bulk wines. Smart beacons would be initially aimed at more expensive bottles.

Regardless, at the consumer point of sale, consumer mobile apps can then read the tags and prove detailed provenance. Of course, this could record on the Blockchain too. In future, consumers could use Apps like Wine-Searcher or Vivino to find and remember Blockchain-guaranteed wines. All they need to do is offer “wine guaranteed” searchability.

Eventually, the IoT will even generate Big Data when the consumer opens the bottle. Home devices can already control lighting, heating, appliances and home security and their usage are growing fast. Even opening the bottle could, one day, send anonymised consumption data to the Blockchain for the retailer and the producer. We all know how valuable this Big Data is for marketing, loyalty and advertising campaigns, increasing the likelihood of targeted sales.

The volume of data generated is huge. Storing it all directly on the Blockchain would slow it down needlessly. Hence there are various methods under development to store associated data securely with cryptographic links to the Blockchain records.

Meanwhile, back in the real world

Now the Blockchain is more than just a clever idea. Over this year, real examples have appeared on Blockchains such as Hyperledger, Everledger and Ethereum. 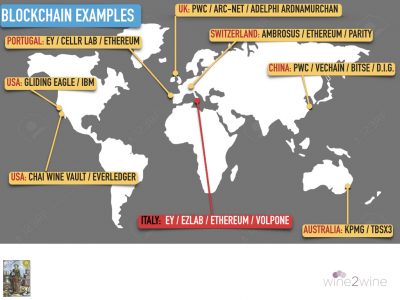 This slide shows eight developing examples around the world. Further cases also exist that are still under the radar.

I’ve only time today to talk about one. Hence, I’ve chosen an Italian example which everyone can look at.

This is the Cantina Volpone winery, based in Apulia. They have partnered up with one of the big four professional services firms, EY; plus Blockchain startup EZlab. They also have help from the University of Padua.

Volpone uses this Blockchain to guarantee the safety, quality and origins of their wine. They started the project two years ago and in 2017 put their Falanghina Bianco on the Blockchain.

They start by capturing the vineyard and winemaking data and creating the passport. The wine bottle has a QR code. You can track and trace this from any mobile device.

But there’s much more information than that! Because a picture paints a thousand words, here’s their QR Code. 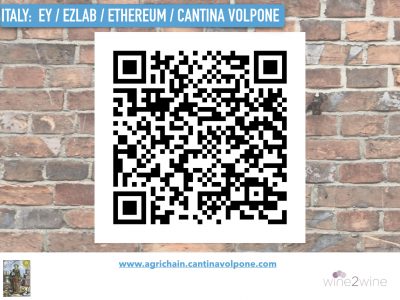 So, real wine Blockchains are here. It’s small-scale and early days and not everything is in place yet to have perfected the wine journey from grape 2 glass. But it will come.

But what happens next?

Part 5 describes the ultimate future of Blockchain and wine, and the path towards it.