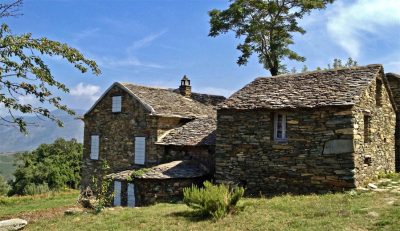 Une Table Corse is a restaurant perhaps like no other. In an ancient and isolated farmhouse, Pauline Julliard, its owner, provides one of the island’s most fabled dining experiences. You’ll eat authentic Corsican cuisine in small converted dining rooms. Pauline learned all the recipes from her mother and grandmother. She is now passing them on to her granddaughter.

The farmhouse, La Ferme de Campo di Monti, dates back to before 1600. It seems to have grown organically out of the slate bedrock. At nearly 1,900 feet, the views here are spectacular in every direction but even summer nights can turn chilly.

Getting there forms the first part of the adventure. The farmhouse lies in the high Maquis, surrounded by oak and chestnut forests. While it’s only 18 miles from Bastia, that will take at least an hour to drive. That’s indicative of the tortuously steep single track route. There are many hairpin bends and precipitous drops that you’ll need to navigate. Probably easier in daylight; on a night illuminated only by stars and with few signs, it presented something of a challenge. Only when the asphalt peters out into a track have you arrived.

I visited, in pitch darkness. The road through this wild land had been partially washed away by winter storms. Hence hiring a 4×4 and staying overnight maybe wise. Don’t let any of that that put you off, as a rare treat lies in wait. If anything, it just heightens the anticipation.

Pauline’s son Eric welcomes us with a glass of local Muscat; he proceeds to serve the food with gusto and makes a congenial host. Meanwhile, a log fire blazes merrily in the grate. The rooms have thick stone walls, massive oak beams and a slate floor. At stout wooden tables sit couples and bigger parties. The ingredients come from the farm or nearby. There is no menu. Instead, you’ll get what’s on that night. Nevertheless, this is a feast, and the copious amounts that arrive seem almost limitless. Each course is a meal unto itself, so you’ll need to pace yourself, or you will come to a standstill. 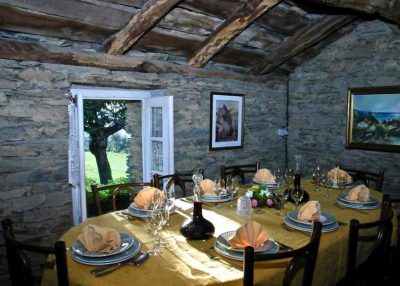 First of all, there’s a Corsican mountain soup, a zuppa corsa, served from a huge tureen. A ham bone (Schincu) with seasonal veg and herbs, different beans, thickened with pasta. It’s akin to a minestrone, rib-sticking and delicious! 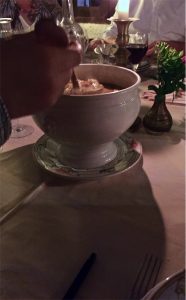 Next up are platefuls of local charcuterie and beignets de fromage frais. Corsican charcuterie is some of the world’s best. The pigs are wild, interbreed with wild boar and graze on chestnuts. The beignets are chestnut-flour fritters combining choux pastry and goat’s cheese, incredibly light and amazingly moreish. 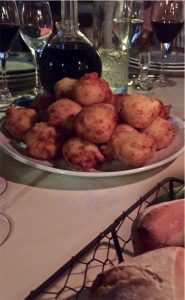 All this was washed down with bottles of local red Nielluciu. It’s the form of Sangiovese grown on the island. Young, full-bodied and tannic, you wouldn’t want anything else.

So much for the entrées, now for the spectacular main event. Lasagne gratinée with platefuls of grilled young lamb made a mouthwatering sight. Pour some more red wine!

After a short break, it was time for cheese, as is the French way. Corsican cheeses are either sheep’s or goat’s milk and so tend to be powerful. These were aged Brocciu, Niulincu and Balaninu. The latter two were almost radioactive, making Epoisses seem bland by comparison. Was it a test? Eric enjoyed our reactions to these cheeses, but I relished them with fig and green tomato jams.

Finally, there were two desserts. First came Fiadone, a form of cheesecake made with Brocciu, eggs, sugar and lemons. We were encouraged to pour Grappa over it and naturally I did so without hesitation. All very Italian.

The star though was more beignets, larger and fluffier than those at the start of the meal. These were then broken open to enable a piquant Clémentine confit to soak into the middle. Quite the best doughnuts I’ve ever had!

With the food finally concluded, Pauline appeared from the kitchen armed with coffee, Marc and Grappa to linger over. She received a round of applause from everyone present before it was time to bid a reluctant farewell.

Une Table Corse is about real slow food and conviviality. The authentic home-style reflects a mixture of French and Italian influences that is wholly and uniquely Corsican. While Corsica has many charms, it’s worth going there for this alone.

It’s also the perfect antidote to the likes of Michelin. With a few notable exceptions, they seem only to reward expensively pretentious food served ingratiatingly in hushed dining rooms. If only there were more establishments like La Ferme de Campo di Monte. It’s exceptional and in a very human way.

As a memento, there is also a Recipe Book, called Une Table Corse. It’s available at Amazon, or you can buy one at Une Table Corse, where Pauline will sign it.

Consequently, eating at this rustic idyll is a must, and it’s advisable to do some planning first. If you’re visiting northern Corsica, then book long before you arrive as there are perhaps only 25 covers. Hire a 4×4 and take cash. A fixed price of €55 is for everything. Cards don’t work for the simple reason that there’s no telephone signal, let alone broadband. How refreshing that is.

Do you like the idea of visiting Corsica? If so take a look at my piece on Corsican Extra-Virgin Olive Oil here, and the wines of Domaine Orenga de Gaffory here.