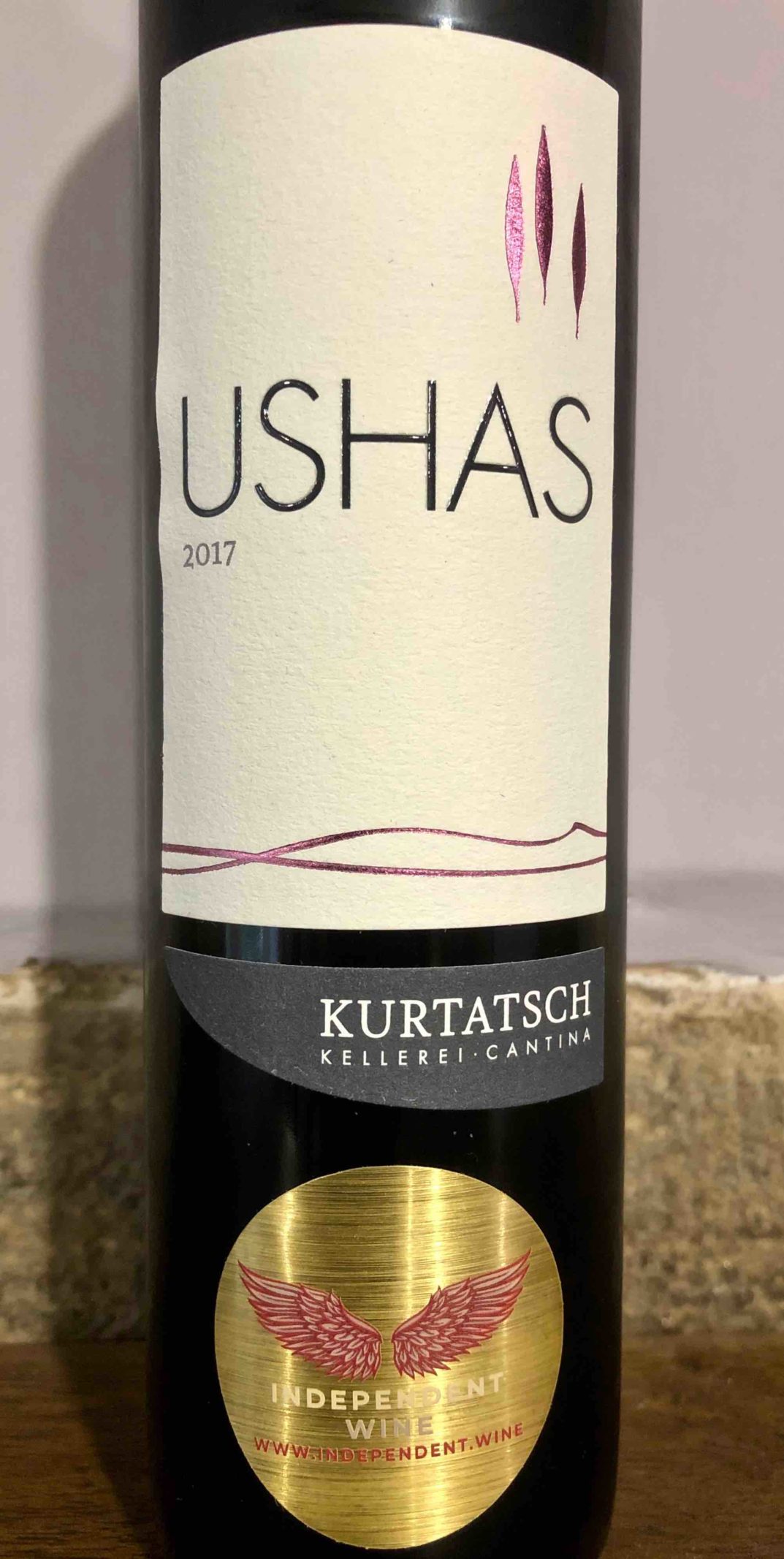 Ushas – Rosenmuskateller and visions of the divine

The Kellerai Kurtasch (Cantina Cortaccia) is one of those magnificent Alto Adige wine co-operatives, focusing on sustainability in the vineyard and the winery. Founded in 1900, its 190 hectares of vineyards rise to 900 metres in this alpine terroir on steep slopes that welcome the sunrise.  As is usual in these parts, Kurtatsch possesses a wide range of grape varieties for high-quality white and red wines. What’s less typical is that Kurtasch is one of the few that grow the rare Rosenmuskateller grape variety. With it, they make tiny quantities of an aromatic red dessert wine called Ushas.

Ushas is the Hindu goddess of the Dawn; she brings light and order to the world, driving the oppression of darkness and chaos away*. Ushas appears as a beautiful young woman, riding across the sky in a golden chariot drawn by oxen. As we’ll see, naming this wine after her is wholly appropriate.

But first, what is Rosenmuskateller? Also known as Moscato Rosa, this highly aromatic red grape variety is part of the large Muscat grape family, which has many guises and names. DNA testing suggests that it may originate in Croatia**. Regardless, there are only 10 (ten) hectares of it in Alto Adige and not a great deal elsewhere. Its rarity, as so often, is down to the fact that it is risky and challenging to grow. 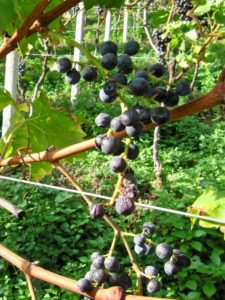 Rosenmuskateller bunches; passito on the vine at Kurtatsch

An unusual feature of Rosenmuskateller is that its flowers are always female. In contrast, most grapevines are hermaphrodite, and so they are self-pollinating. Instead, Rosenmuskateller needs other vines nearby to pollinate it. In turn, that means that pollination is haphazard, so the fruit set is irregular and in rainy conditions may not occur at all. Yields are therefore not only minuscule but contingent. The resulting grape bunches are scrawny, comprising small loose berries (some are seedless too) that ripen unevenly, with their thin skins susceptible to rot. This chaotic vine needs a lot of manual work and dedication!

To bother with such a perfidious grape requires other, more economically viable varieties nearby. It also demands a terroir with drying breezes, long sunny autumns and sandy soils on steep slopes, all of which help prevent fungal diseases. The Alto Adige has those qualities and so can create a Rose without a thorn. In addition, the grapes have plenty of sugars and balancing acidity, and thin skins help the grapes dry quickly. A lack of seeds and skins mean low tannins, but there’s no shortage of colour. All these make Rosenmuskateller eminently suitable as a dessert wine for special occasions.

The Rosenmuskateller harvest is as late as possible, often to November. This late harvest style can also lend itself to the passito dried grape method, which concentrates sugars and complexity even further. Usually, the grapes dry and raisin on the vine. However, they can also dry in the winery, which reduces the risk of rot or predation by birds and boars. Either way, the potential alcohol of the grapes usually reaches at least 16%. The subsequent fermentation creates a sweet wine with residual sugar balanced by a high level of acidity and around 12.5% alcohol. This style accentuates the grape’s aroma and flavour purity – Botrytis would be an unwelcome interference. 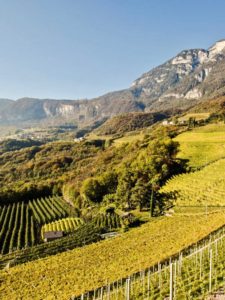 The production of Ushas is tiny; this bottle was number 1,523 of just 3,000.  A stated yield of only 20hl/ha suggests that Kurtatsch has about 0.1 hectares of Rosenmuskateller vines! These face south-southeast on steep sand and gravel slopes at 400-500 metres in altitude. It’s one of the warmest spots in this part of the Adige valley. However, the usual drying mountain winds and a considerable diurnal variation encourage long slow ripening.

The Alto Adige DOC includes Rosenmuskateller, but this example is an IGP Mitterberg, a regional wine designation rarely seen.

Fermentation begins in stainless steel but finishes in old barriques. It’s then left to mature on the skins and lees for ten months. The resulting wine is 12.5% alcohol, with 195 g/l of residual sugar and 6.8 g/l of acidity. The old barriques allow development but don’t mark the wine, so all the grape varietal character is maintained.

The colour of Ushas is a deep crimson. A cloud of red Rose perfume leaps from the glass, explaining why this grape is Rosa in Italian and Rosen in German. On further examination, intense scents of fresh and dried red rose petals dominate, but there’s also raspberry, strawberry, red cherry and hints of clove and nutmeg too. The long skin contact extracts enough tannins for a silky and slightly dense texture. In turn, this balances out the acidity and moderate sweetness. There’s complexity too, yet more roses (rose hips?), fresh strawberry and raspberry fruit, plus a little cinnamon and orange peel. Meanwhile, that acidity prevents the wine from ever becoming cloying, so you always go back for another sip. 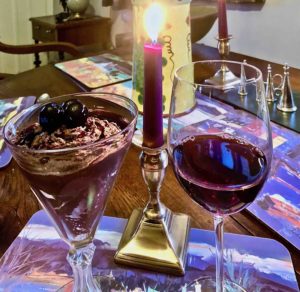 Ushas is drinking perfectly now and probably will continue to do so over the next ten years. It’s a dessert wine ideal for special occasions, served lightly chilled and matches desserts that are not heavy or over-sweet.

It’s at its brilliant best with Crema di Ricotta al Cioccolato (Chocolate ricotta cream) and a garnish of raspberries or redcurrants. Making it is easy, and there’s a recipe for it here.

Ushas is stocked in the UK by Independent Wine at £32.73 for a half bottle. So go on, treat yourself!

In Hinduism, the Goddess Ushas not only revives life; she also shows us a vision of the divine. How apt that is.