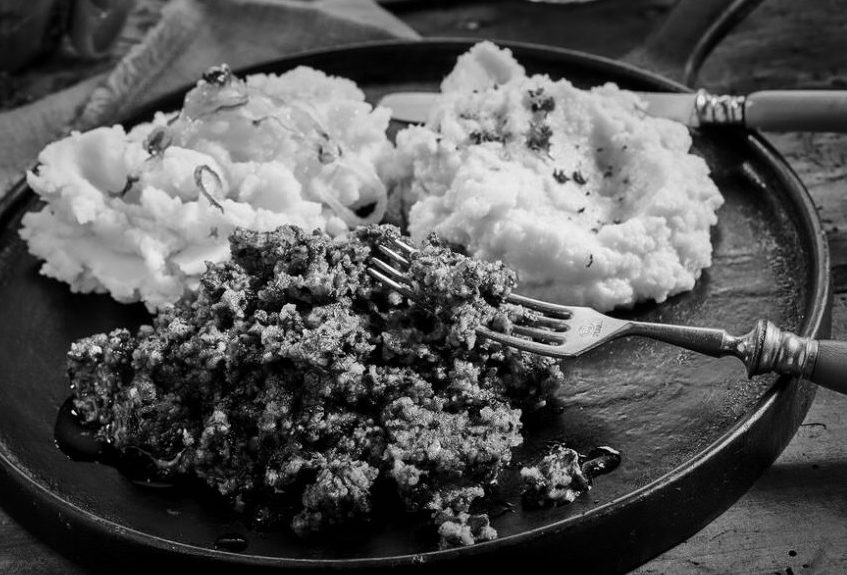 Vegetarian Haggis – It’s Not so Offal

Vegetarian Haggis? A contradiction in terms. Hold on, not so fast.

In the early 1990s, while staying in the Bruntsfield area of Edinburgh, we happened by chance on Macsween’s butcher’s shop. It was there that the late John Macsween built his reputation as a premier Haggis maker. On entering, we discovered his Vegetarian Haggis alongside the traditional Haggis and Black Puddings. Intrigued, we bought one to try. Suffice to say that it’s been a regular purchase ever since.

Haggis is traditionally a mixture of lamb and beef offal with oatmeal, onion and a blend of seasonings and spices cooked up together inside a natural casing like ox-intestine. The exact recipe varies with the maker. Although it’s not unlike a sausage, such a combination strikes fear into many a prissy meat-eater let alone a vegetarian!

The origins of Haggis, Scotland’s traditional dish, are unknown. Some advance the idea that it came with the Romans. Others suggest it originated with the Viking invasions. Perhaps it’s older than both. Whatever the case, fame came in the Eighteenth Century from the association with poet Robert Burns, who wrote Address to a Haggis in 1787. It starts like this:

Fair fa’ your honest, sonsie face,
Great chieftain o the puddin’-race!
Aboon them a’ ye tak your place,
Painch, tripe, or thairm:
Weel are ye wordy o’ a grace,
As lang’s my arm.

There are seven more verses after that, including this one:

Is there that owre his French ragout,
Or olio that wad staw a sow,
Or fricassee wad mak her spew,
Wi perfect scunner,
Looks down wi sneering, scornfu view
On sic a dinner?

Of course, on Burns Night (January 25th), celebrated worldwide, the entire poem is recited, usually just after a Haggis is brought to the table accompanied by a Piper. But Haggis surely deserves to be enjoyed on more than one night of the year!

For the vegetarian version, kidney beans, lentils, and a mixture of vegetables and nuts replace the meat. The oatmeal, onions and the spicy seasoning remain. There’s also the advantage of a lower fat and salt content too.

Macsween’s keep all their Haggis recipes a secret, even making the staff sign a confidentiality clause, but the vegetarian version tastes remarkably similar to the meat version. And here’s the bit that proves I’m not Scottish: I prefer this vegetarian version!

How did John Macsween invent it? In 1984, poet Tessa Ransford challenged him to make a haggis suitable for vegetarians for a special Burns Night dinner celebrating the opening of the Scottish Poetry Library. An immediate success, Vegetarian Haggis is also approved by the Vegetarian Society.

You can find it easily too. As well as Harrod’s, Fortnum’s, Selfridges, Waitrose, Booth’s, M&S and the Big 4 supermarkets, it’s stocked by many a deli.

So successful are Macsween’s that in 1996 the family closed the Butcher’s shop in Bruntsfield and moved to the world’s only purpose-built haggis-manufacturing plant at Loanhead in Edinburgh. The palm oil used in the recipe is only from sustainable sources certified by the RSPO.

The vegetarian Haggis comes in a range of sizes, and there are also “miniatures” that make great starters. As the Haggis is pre-cooked, all you need is a gentle re-heat. You can freeze it and use a microwave to reheat – it could be the ultimate convenience food.

While there’s also any number of recipes available for Haggis as a starter or main course, the traditional way is favourite; Neeps (mashed turnip and swede) and Tatties (mashed potato) with a dram of whisky poured over it. It deserves a Single Malt like Talisker or Highland Park. There are Michelin-star versions too, but deep-fried Haggis with chips and a can of Irn Bru is rightly popular.

Of course, there’s nothing to stop you making your own vegetarian Haggis; there are plenty of recipes available online. But when Macsween’s is this good, why bother? After all, it’s the only Haggis to have won an award from the Guild of Fine Foods.

As well as Whisky, Vegetarian Haggis is excellent with a wide range of big fruity reds. For example, take your pick in these pages from Malbec, Bobal or Nero d’Avola. It’s Braw!

An earlier version of this article first appeared in a long-defunct food and wine magazine, all the way back in 2000 AD.  Meanwhile, there’s more offal writing here.

And for Vegetarians, this is the best veggie restaurant I’ve ever been to.