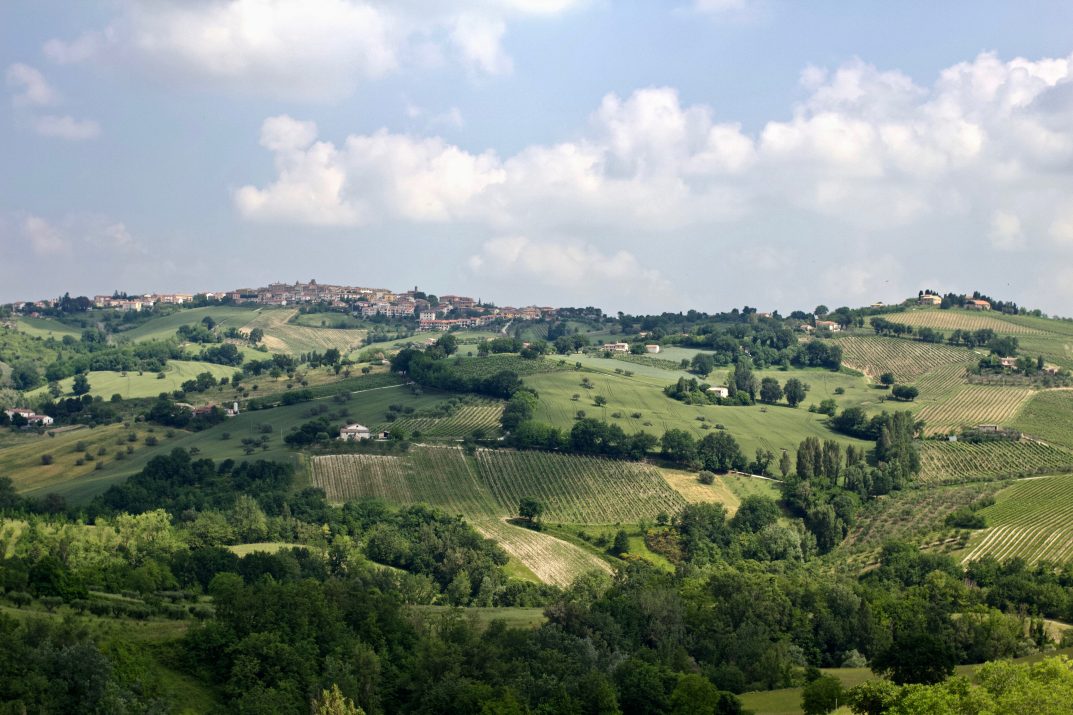 The Verdicchio of the Castles of Jesi

In my first article on Verdicchio (Part 1: Matelica, fifty shades of green), I mentioned that the Marche region of central Italy is where the best Verdicchio grows. Here it proves to be one of Italy’s finest native white grapes, capable of outstanding longevity. Part two is about Verdicchio dei Castelli di Jesi, Matelica’s more famous partner.

It’s in the province of Ancona, where you’ll find the Castelli di Jesi DOC and DOCG. The name means the Verdicchio of the castles of Jesi. It refers to the numerous hilltop villages that dominate this region, surrounding the central town of Jesi. Each has its medieval fortress. Communities such as Staffolo, Cupramontana, Montecarrotto, Castelbellino and Castelplanio are some of the main gems. They are balconies offering breathtaking views of their surrounding landscapes.

This Marche coastal region, when seen from above, resembles a giant hair-comb. Numerous river valleys cut through limestone and run east-west to the Adriatic. Cooling sea breezes blow unimpeded up these valleys from the coast. 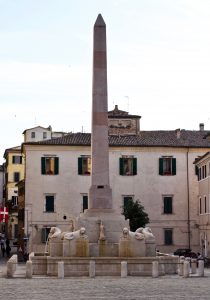 Unlike Metalica, the much larger Castelli Jesi, with some 3,000 hectares under vine, is a more complex DOC area. It’s possible to imagine subzones based on different terroirs, aspects and altitudes. However, these remain undefined, although a Classico zone covers 90% of the vineyard area.

The designation Superiore is for wines with higher minimum alcohol content from the Classico zone. However, during these days of climate change, grape ripeness is hardly an issue. Mostly, the wines are still and bone-dry. As in Matelica, there are also some excellent spumante fizz and sweet passito syles.

Most wines never see oak. However, some producers use it in fermentation and maturation, usually for the Riserva’s. Indeed, Verdicchio has an affinity with wood, which can add extra gastronomic complexity to a winegrowers range.

This year, Jesi celebrates the 50th anniversary of its DOC, and the DOCG for Riserva wines came in 2010. The DOCG covers just 145 hectares. It stipulates a minimum of 18 months of maturation, of which six must be in the bottle. Meanwhile, the DOC requires a minimum of 85% Verdicchio, though most (and the best) are 100% varietal wines.

Jesi’s Verdicchio is sometimes rounder and mellower than that from Matelica. However, within Jesi, there are considerable zonal differences. For example, wines from Montecarotto are weightier than from, say, Cupramontana. However, much depends on the individual winegrower, so the producer name remains the best guide.

Some call Verdicchio dei Castelli di Jesi “the white Barolo”. That conjures associations of complexity, delicacy, longevity and high quality. Indeed, the best wines are genuinely world-class, beautifully aromatic and fresh when young, yet capable of developing over many years in bottle. 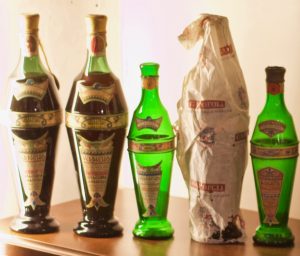 There are still high-volume cheap quaffers available, some even with an unwelcome hint of residual sugar. Ignore those, as they offer none of Verdicchio’s glory and historically have tarnished its reputation.

Such wines often come packaged in an unusual amphora-shaped bottle that won a design competition in the late fifties. While that has helped with recognition, that became increasingly for the wrong reasons, mainly an advert for indifferent wine. Hence quality producers have distanced themselves from it by adopting standard shaped bottles.

So a memorable Verdicchio should be bone-dry and offer scents of Hawthorne, herbs and almonds. Look for refreshing and zingy pear and lemon flavours, a streak of flinty or saline minerals, and finally, a real more-ish bite. Delicacy and elegance should be a hallmark. At its best (which is often), Verdicchio is distinctive, unique and glorious. The older they get, the more complicated they become, and many will peak at between five and ten years. So do buy one bottle to drink now and another to put away!

Below are some food suggestions and wine examples to find in the UK. 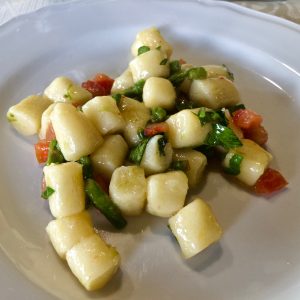 Verdicchio dei Castelli di Jesi shines with food, in the same way, that Verdicchio di Matelica does. So seafood is a great match, from mussels and clams to octopus and squid.

My favourite match is Gnocchi. Try it with asparagus, basil and fresh tomato drizzled in extra-virgin olive oil. Further afield, Japanese-style Tempura prawns or Sashimi/Sushi are terrific too. Or try this recipe for spaghetti with an artichoke sauce.

“Podium” is from a single vineyard at Montecarrotto, spending 15 months in stainless steel then four months in bottle. This wine is a revelation from one of the Marche pioneers. Late harvest and barrel-ageing bring out the Hawthorne scents and add a tropical fruit dimension with almonds and mineral finish. “Podium” is a must-try classic that ages beautifully. For example, the 2008 vintage still looks young and tastes fresh but has evolved a rich complexity. Mondial Wine. £19.69

Villa Bucci is another Marche institution based in Ostra Vetere and organic. All their wines look for elegance rather than power. Everything is by hand. They even spray clay onto the vine leaves to limit sugar production (and therefore alcohol) in heatwaves with climate change. Hard to believe that this “Bucci” line is more “entry-level” than their “Villa Bucci” range. It’s softly golden in colour, aged for six months in bottle. It’s fresh and zingy and with a persistent salinity. A delicious bargain. The Wine Society has half bottles £6.75; Italvinus has full bottles £12.23

This estate in the northern part of Classico makes superb red Lacrima di Morro d’Alba DOC. Their Verdicchio is a treat too. This one is a selection from their oldest vines. Green apples, a hint of candied lemon and lots of almonds before that salinity kicks in. Will age well but hard to resist now. Bat and Bottle. £15.00

Some Italian co-operatives are making brilliant wines these days, and Collonara in Cupramontana is an excellent example. For Cuprese, they blend their best Verdicchio selection from several growers around the DOC Classico. Fennel and white flowers on the nose, mineral freshness and pear fruit. Older bottles are a treat, too; 1988 had taken on a deliciously honeyed, buttery character. Collonara has a vast wine range, and all are worth investigating. GP Brands £14.38, Alivini £12.34 By the way, at £25.00, Cuprese is also an incredible bargain at Michelin-starred Locanda Locatelli restaurant in London. There’s more about Colonnara here.

Established in 2010, this 25-hectare estate at Cingoli is a rising star. It will receive organic certification from the 2018 harvest. 85% of their vines are Verdicchio. My pick is Ghiffa, a late picking, low yield selection from 20-year-old vines aged 12 months in stainless steel. Deep coloured and leesy flavoured, this is a rounder, creamier and more powerful expression that nonetheless retains a zingy crispness. Old Butcher’s Wine Cellar, Monmouth. £14.99

Umani Ronchi is a byword for Italian excellence, organic, and giant Marche. This Verdicchio is a selection from their Montecarrotto vineyard. It matures for ten months in cement vats. Camphor-scented, acacia and pears, delicious wine with a final salty kick in the pants. Great Western Wine £13.95; Italvinus £13.60

And now a couple of brilliant Jesi Riserva DOCG’s

A masterpiece only from better vintages. It takes elegance and finesse to a new level: a sublime silky texture and a fabulous mineral streak. They are organically farmed and matured for two years in big old barrels. Time brings a savoury note, with nuts and stone fruit. A 1992 vintage still has a freshness to underpin a honeycomb development. Watch out, Grand Cru Burgundy. Outstanding value for one of Italy’s finest white wines, a treat with oysters, lobster or crab. Alexander Hadleigh Wines, £25.28

In contrast, this is a thoroughly modern organic example. The Verdicchio comes from higher altitude vineyards at Cupramontana. 60% is stainless steel; the rest gets the oak cask treatment, using 5,000-litre botti. Maturation is 12 months plus six in the bottle. A small proportion of the wine also receives malolactic fermentation to soften the acidity. The result is pineapple fruit together with vanilla, spices and nuts. Butter, smoke and honey. Softer, but finesse and minerality.

Consequently, it proves that Verdicchio and oak can be happy marriages. Therefore, it’s also a wine for meat as well as fish. Great Wines Direct, £20.15

Verdicchio is not only a tremendous white grape; its wines seem to give a sense of unity and identity to the Marche. In Ancona, I saw a line from a poem by Francis Thompson graffitied on a wall. It said, “Non-si puó cogliere un fioré senza turbare una Stella”.  “Thou canst not stir a flower / Without troubling of a star”.

There’s undoubtedly superior quality graffiti in the Marche! It must be a side effect of all that poetry from Verdicchio!