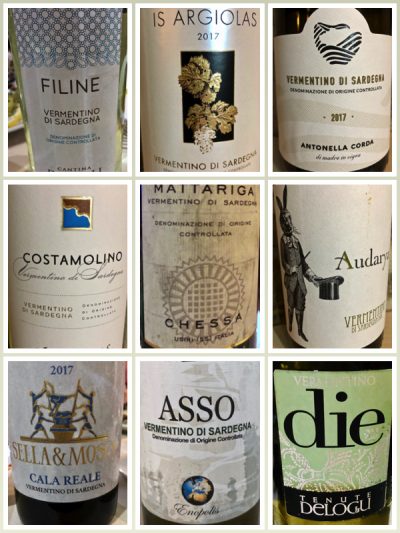 Vermentino di Sardegna comes from the island of wind and wine. Sardegna is roughly the size of Wales and the second biggest of all the Mediterranean islands. Being there feels like it’s an entire continent, such are the varying landscapes.

Once upon a time, Sardinian Vermentino was mostly quaffing wine, cheap and cheerful. However, the best examples now rank alongside Vermentino di Gallura DOCG from the northeast of Sardegna in quality and expressiveness.

While Vermentino has long grown on Sardegna, increasing popularity means that it’s now found all over the island. Surprisingly enough, DOC status for it wasn’t until 1988. Even then it was later than other DOC’s on the island. It reflects an upward push on quality that started in the eighties and gained momentum during the 1990’s. Vineyards were replanted with better clones and training, while wineries modernised and new ventures established.

As a result, there are some 3,500 hectares (ha) producing 10.5 million litres every year. Before, in 1990, it made only half the amount of its neighbour, Gallura DOCG. Presently, it’s twice as much.

The main DOC rules are straightforward, as Vermentino di Sardegna must contain a minimum of 85% Vermentino grown on the Island. The other 15% can be other authorised white grapes. However, most examples are 100% Vermentino. The minimum alcohol level of 10.5% is comfortable, and there are no rules on ageing.

Vermentino di Sardegna typically is a dry white wine, made in stainless steel. Hence there is usually no wood influence, and the wine is ready after a few months. However, there is also some fizz and the occasional sweet passito wine.

The style of Vermentino di Sardegna

Typically, the wines have a strength of around 13%. They are therefore less potent than their counterparts from Gallura. However, they have fresh acidity, a welcome lightness, whit fruit and minerality. Also, there should be a tell-tale bitter almond kick with a little salinity on the finish.

However, such a large island has many different terroirs, which means diversity. For instance, these range from coastal to inland locations, sea level to altitude, and on flat land or mountainside. Consequently, soils vary too, from limestone to sand and clay. And yet the granite that so typifies neighbouring Gallura is rarely present. Unlike the wind.

Exceptional heat and drought characterised 2017. Hence many wines have a little extra alcohol. Nonetheless, while the harvest was therefore unusually small, the grape quality was excellent. 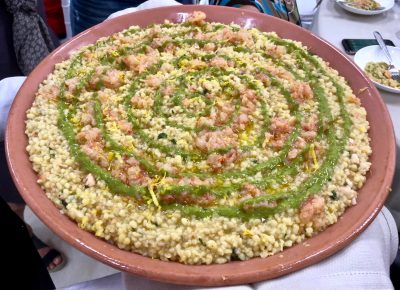 As well as revelling in its role as a terrific aperitivo, Vermentino di Sardegna is right at home with food.

Notable favourite matches include Burrata dressed with olive oil, basil and lemon peel. The traditional Fregula pasta is also perfect, as are all the usual fishy suspects.

No surprise then that pasta dishes such as Spaghetti alla Vongole work well. So do “white” pizzas and young cheeses. Further afield, Sashimi is a natural match.

What not try Vermentino di Sardegna as a delicious alternative to Sauvignon Blanc. Or perhaps by now, you’re bored rigid by Pinot Grigio?

A selection of Vermentino di Sardegna wineries and their wines

This Part 1 covers 14 Vermentino di Sardegna producers and 25 of their wines. These are around the south of the island, roughly based around Cagliari. Part 2 covers those further north, centred on Alghero.

All the wines are 100% Vermentino and made in stainless steel unless otherwise stated. They range from the traditional to the ultra-modern; from boutiques and family-owned estates all the way to large cooperatives. The wineries grow many different white and red grape varieties, of which Vermentino is just one. As usual, there are UK stockists and prices. If unavailable in the UK then there is an indicative cellar-door price.

The south and Cagliari

The Santadi cooperative started in 1960, with 650 ha and 200 members. In Sulcis, the vines grow on sand and clay. Under the guidance of the famous oenologist Giacomo Tachis, the quality of the wines skyrocketed, yet the value remains.

A blend of 85% Vermentino and 15% Nuragus, an indigenous white grape. Hence the Nuragus broadens the wine out but leaves the Vermentino signature of fresh acidity and salinity intact. Top value. Latitude £11.99.

Classic Vermentino; herbs on the nose, apple, peach and pineapple fruit and an elegant finish.  Tannico £10.51.

Cantine Paùli’s is the new brand name of the Cantina Sociale di Monserrato, near Cagliari. It’s the oldest cooperative in Sardinia, dating from 1924, with 450 ha. Vermentino is about 35% of production.

This entry-level wine is from a mix of locations. Pineapple fruited with a little saline kick, almonds. N/A UK €5.00. 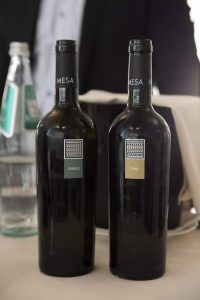 The winery is now part of the Santa Margherita Group. It has wineries in Veneto, Alto Adige, Lombardy, Tuscany, and Sicily. Meanwhile, Mesa is in the Sulcis area, close to the sea. 30% of production is Vermentino. At harvest time, Dry Ice keeps the Vermentino grapes cool during an initial maceration. Lovely looking bottles!

This cooperative, founded in 1939, is located on the island of  Sant’Antioco in the southwestern part of Sardinia, with 200 ha of vineyards and 300 growers. The territory has sandy soils at sea-level which makes growing ungrafted vines possible.

A Cooperative Winery, founded in 1949, covering the Sulcis area and the island of Sant’Antioco.  Of their 300 ha, 35 are for Vermentino, mainly at Sant’Anna Aresi. Again, sandy soils at sea level mean there are some ungrafted vines.

24 months on the lees, disgorged in November 2016. Sadly, only 6,000 bottles. Extra Brut style, so no malolactic or dosage and 9g/l residual sugar. Rapier acidity thanks to sea-level, strong winds and early picking from one plot. Classy fizz. N/A UK €24.00. 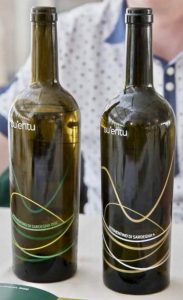 The Pilloni family own Su’Entu. It’s an inland location at Sanluri with 32 ha on calcareous soils at 200m on the flat Campidano plain. The ultra-modern winery has 13 ha of Vermentino. Most of their production is for the hotel and restaurant market.

This cuvée spends six months in new 450-litre French oak casks. Toasty new oak on the nose and cinnamon, ginger and vanilla add to the pear and quince fruit. A little chamomile appears when it opens up. N/A UK €15.00.

Ignio Massidda represents the fifth generation at this family-owned winery near Cagliari. He cultivates 30 ha on sandy soils at around 250 metres altitude, of which eleven are Vermentino.

Tried when only bottled for one day. Needs time to settle down but this is a classy wine, with pear and pineapple notes and mouthwatering acidity. N/A UK €9.00.

The Locci Zuddas company dates from 1950, near Cagliari. It has 30 ha of vineyards but also buys in grapes from many growers within its region. Hence it offers a wide range of wines; in bulk, bottle and as bag-in-box.

A blend of owned and bought-in Vermentino grapes grown on sand and clay. Light straw colour. Apples and pears on the buttery palate before an almond kick on the finish. N/A UK €9.00.

Enopolis is a marketing consortium in Cagliari involving the Trexenta cooperative.

Full of flavour that belies the lighter alcohol. Hawthorn and white blossom nose. Lemons and pears with a touch of honey and grassy notes, all cut with rapier acidity. Precision wine and terrific value. N/A UK €8.00.

A cooperative formed in 1956. It has 200 ha and 150 growers. Vermentino dates from the 1980’s. In the UK the wines are sold primarily in restaurants and hotels.

This family estate of 120 ha has 90 ha of vineyards, with another 6 ha to come onstream. Thier Vermentino makes up about 55% of production, with the oldest vines being 28 years old. During the 1990’s they changed from bulk wine producers to premium bottled wines. The stony and sandy soils here dry out quickly, so irrigation is essential. For the harvest, machines are used at night when it’s cooler.

Lemon and lime by the bucketload. Think PLJ. Concentration and intensity. Maybe needs more time in the bottle to tame it. Salty finish. N/A UK €10.00. 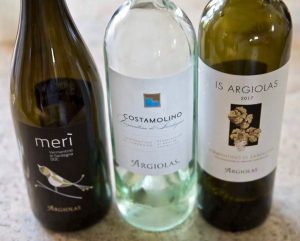 One of the most famous names on Sardegna. This old winery in the centre of Serdiana led Sardegna’s quality revolution in the 1990’s. Now run by the third family generation, it covers 25o ha. The old winery exterior belies the state of the art equipment inside. White grapes are transported with Dry Ice, to prevent oxidation, and this also allows a low sulphur regime.

The “entry-level” Vermentino from their Selegas vineyard. Merì means “late afternoon”, the perfect time for an aperitive. Part of their Innovation range. Early picking to preserve acidity and get balance with the alcohol. A few bubbles in the glass give a slight prickle on the tongue. A lightness of touch, with pear and apple fruit, almond kick.  Euro Wines £13.49.

Vermentino from their Selegas vineyard, a selection using the first grape pressing only. Part of their Tradition range and classic. Subtle, seamless, clean and crisp. Less delicate, more power, all balance. Valvona & Crolla £16.99.

Part of their Territory range, from Selegas. First pressing wine used, with a small proportion fermented and aged in French Oak barriques. Floral aromas, gently salty, passionfruit on the palate and you can’t detect any overt oak influence. The slight oaking makes it broader and silkier. A triumph. GP Brands £18.56.

Labelled as IGT Isola dei Nuraghi but will revert to DOC from 2018. Vermentino from their Sissini vineyard. 100% fermented and aged for eight months in French oak barriques. Part of their Prestige range, a wine designed for ageing over many years.  Mellow and stylish. Some wood aromas, but not dominant. Clean, buttery yet still zippy. In particular, it’s expensive, but it’s a statement about what Vermentino can achieve. GreatWinesDirect £44.51. 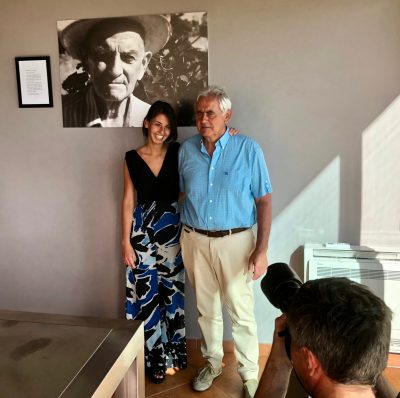 Set up in 2014, Audarya is on the southern end of the Campidano plain. There’s 40 ha of vines, in four plots on limestone soils surrounding the winery at around 150m. Spanning three family generations, Nicoletta and Salvatore Pala are in charge.

Harvested in triage, this is straw coloured and green tinged. Here’s a subtle wine that reveals itself as it opens up in the glass.  Hawthorn nose, peachy apple fruit, delicate acidity and silkily textured. Terrific value. Sommelier’s Choice. £11.31.

Antonella Corda is a talented agronomist who inherited the family winery in 2010. There’s 15 ha of vines on the limestone soils of Campidano. Seven of these are Vermentino, with the rest given to Nuragus and Cannonau. This boutique winery is in Serdiana, near Cagliari, at 150 metres altitude.

A subtle and delicious white wine. Highly aromatic, herbs and camphor amidst white blossoms with almost a Riesling note. Mouthwatering palate. Long finish with an almond bite at the end. Complete. Only made in small quantities but will someone please import this exciting wine? N/A UK €12.00. There’s a full artlicle about Corda’s wines here.

Near Cagliari, a cooperative established in 1949 with 630 members and 1,200 ha in the lower Campidano area near Cagliari. That makes them the largest winery in Sardinia. Despite their size, this is a source of some exceptional wines. There were significant changes here when they switched their focus from quantity to quality. Naturally, there’a wide range of grape varieties, including the rare (and brilliant) Barbera Sardo called Terresicci, which is one of their top reds. Naturally, there’s plenty of good Vermentino too. Organic wines will appear over the next few years.

From clay-calcareous soils on rolling hillsides. Golden yellow. Floral nose (Broom?), fruit is in the tropical spectrum, pineapple, perhaps passionfruit. Not much salt, but the almonds are there, all wrapped in vibrant acidity. A great food wine, sharply priced.  Euro Wines £12.95.

Click here to read Part 2, about the Vermentino di Sardegna producers and wines from further north.