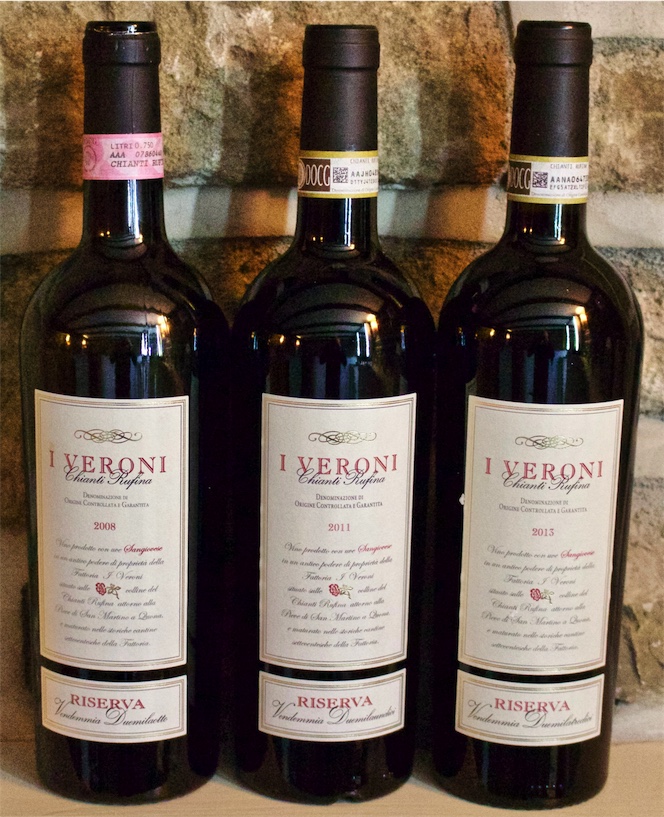 Chianti has seven subzones besides Chianti Classico, the best-known region. Chianti Rùfina, (pronounced, in my best London accent,  Roo-fina) is the best of these. It’s a small enclave of 1,000 hectares at most and probably accounts for only about 3% of all Chianti production. Perhaps it’s the only Chianti subzone to rival Classico consistently in the quality of its wines. Here you’ll find the I Veroni estate.

The predominant grape variety grown in Rûfina is Sangiovese. For Chianti Rùfina DOCG, it must make at least 70% of the blend in both the Annate and Riserva wines.

Rùfina is close to Florence, eastwards in the foothills of the Apennine mountain range and far inland. A mountain pass allows cooling sea breezes in and it has a cooler, more continental climate than anywhere else in Chianti. It shows in the wines because the grapes retain fresh acidity and tannins. Hence, the wines are durable, taking longer to reveal their best side. They have a perfumed and more austere style, swapping this for some of the power and warmth of Classico. This terroir gives the wines a clear identity of their own.

Rùfina has some of the very best vineyards anywhere in Chianti-shire. While redefined slightly under DOC and then DOCG, it was already an area of excellent wine production back in 1716. Both Rùfina and Classico are within the edict made by Cosimo III, a Medici and the penultimate Grand Duke of Tuscany.

In more recent times, the reputation of Classico soared, and so inevitably, did prices. While Classico still overshadows Rùfina in both recognition and volume, it has indirectly helped make Rùfina viable economically, while prices are still often lower.

Hence, from the 1990s onwards, there has been a renaissance in the estates and vineyards here. While there are the inevitable Supertuscans made, the glory and personality of Rùfina reside in its Riserva DOCG wines. These are usually made in the best vintages with the ripest grapes and receive longer maturation. The definition is for at least two years, of which a minimum of 6 months must be in wooden casks.

There are a handful of top estates. One such is I Veroni, located in the modern town of Pontassieve, just 17 km east of Florence. Follow the River Arno up to where it joins the River Sieve at Pontassieve, either by car or train, and you’re there. 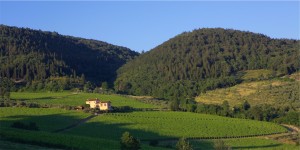 This estate gets its name from hillside terraces once used to dry tobacco and wheat above Pontassieve. It’s an old feudal property and has been owned by the current family since 1897. In 1996, it decided to concentrate on wine production as the renewed interest in quality Chianti grew. Hence Lorenzo Mariani, the current owner, revived and improved the vineyards. Of the estate’s 70 hectares, 21 are now organically farmed vineyards, and a further 30 are olive groves.

Some 95% of the I Veroni vineyards are Sangiovese, but there is also some Colorino, Canaiolo Nero, Merlot, Syrah, Petit Verdot, Malvasia, Trebbiano, Vermentino and Sauvignon Blanc. Consequently, I Veroni makes red, rosè, and white wines and vin santo. But it’s the all-Sangiovese Rùfina Riserva that’s the star.

I Veroni’s Chianti Rùfina Riserva is 100% Sangiovese; in purezza, at as the locals would say. The Sangiovese is from a small parcel of 2.8 ha, around a Church the top of a sloping vineyard that faces south-southwest at around 350 metres altitude. Fermentation in cement tanks takes two weeks. The wine matures for 18 months in wood. These are 225 and 500 l French oak casks, 50% of which are new. Once bottled, it continues maturation for another 12 months before release.

In 2016, I Veroni celebrated the 20th anniversary of their Riserva, showcasing the longevity and quality of this wine by comparative vertical tastings, verticali, if you will.

Here is my small vertical of three of those vintages.

A vibrant dark purple colour. Not yet ready, but it still comes alive with food. Rather robust tannins make this austere at this point, but there’s hallmark elegance too. A hint of tobacco and violets on the nose, red cherry fruit. A tarry quality appears on the finish. No sign of overt oak flavours, though spices show on the finish. Keep for at least another 2-3 years to release the potential still locked up.

Such a pretty wine. An unusually plush year with noticeably more alcohol, deep purple-red. Unusual power, more Classico in style, yet it retains balance and finesse which belies the alcohol. It’s starting to drink now, and over the next decade, it will continue to improve. Loose tea mixed in with red cherry and cranberry scents. Sleek, silky tannins reveal a depth of fruit flavours, complexity and minerality. It might be the best of these three, but only time will be the judge. I’d leave it another five years, though you can drink it now. Whether it will have quite the long-term staying power of cooler vintages is, for the moment, unknown.

Some garnet colour is appearing as the wine ages. Perfumed, violets and roses to the fore. Opening up now and drinking well. A lovely mix of dried and fresh red cherry fruit on the palate with a balsamic undertow and mild spice finish. Bright acidity keeps it balanced. The tannins have softened, but still a little dusty. Many years left in the tank!

As for food matching, I kept it simple. After a formal tasting, each wine was were enjoyed with Lamb Chops, Rosemary and roasted vegetables. The tannin and acidity in the wines were a great foil for the meat while roasted parsnip and sweet potato enhanced the fruit.

This Riserva is a superb wine that comes highly recommended. It will reward you if you keep it or buy mature bottles. As a reference point, in my opinion, the I Veroni Riserva is up there with the best Riservas made in Rùfina; namely Bucercihale from Selvapiana and Montesodi from Frescobaldi. That’s no mean achievement! 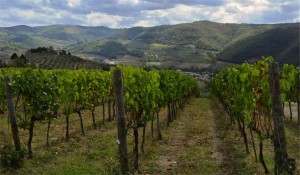 As a final thought, I Veroni also have high-quality agriturismo in an old Farmhouse called Podere Pianottolo, surrounded by vines in the hills above Pontassieve. That would make a beautiful base for visiting Florence!

Prices. The Riserva in Italy is around €18, in the USA $30. Contact the UK importer,  Anthony Byrne Fine Wines for stocks and prices.