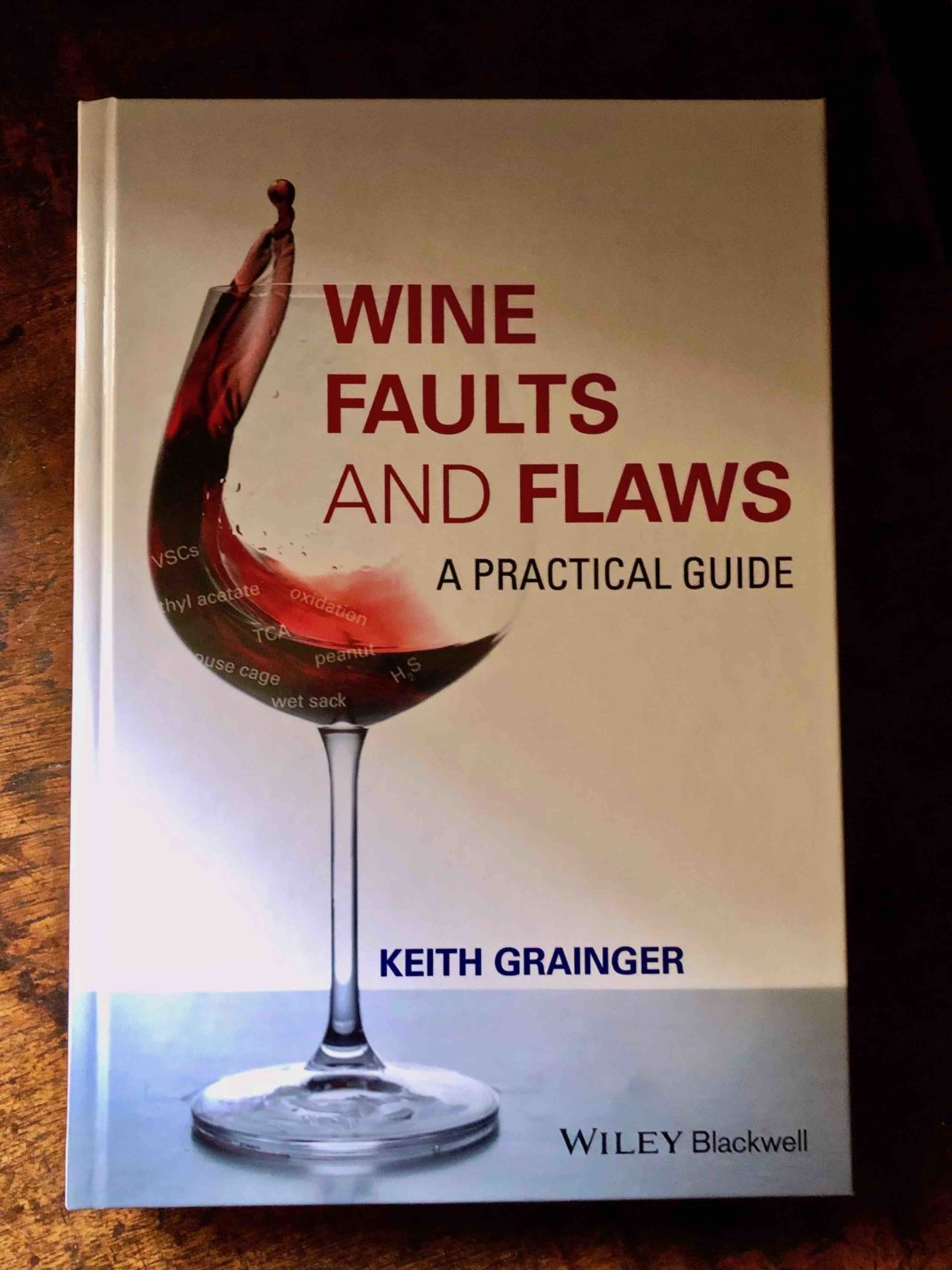 Wine Faults and Flaws is a brand new book by Keith Grainger*.  It took ten years to write and was published on 10 June 2021. This book does what it says on the tin and bridges the gap between heavy science and popular readability whilst retaining scholarship.

You’ll find plenty of anecdotes, analogies and asides to leaven the tone and, refreshingly, few chemical equations. Neither is this a mere list of faults and remedies, as it sets the topic in the human contexts of the senses, culture and commerce. Hence it’s a book that will appeal to a broad audience, from lay wine drinkers to wine professionals.

After reading it, I’m now more likely to diagnose a fault, know the reason, and decide what to do about it.

There are 528 pages, with an index, glossary, useful websites, hundreds of references and suggestions for further reading. Coverage of this topic is nothing if not comprehensive, and rightly so. However, there are many stages where things can go wrong in the journey from grape to glass. And that’s despite all the advances in wine technology at our disposal.

Faults and flaws can be physical, chemical and microbiological in origin. They may come from the vineyard, the winery, or the logistics of packaging, transportation and storage. Sometimes, affected wines are treatable, but many faults have no cure. A few, thankfully of minor incidence, pose real dangers to human health. On the other hand, according to their concentrations and detection thresholds, some defects may be tolerable. Perhaps most curiously, some flaws can even be manifestly enjoyable and desirable! However, they all have one thing in common – all are preventable. Hence, to quote Benjamin Franklin, an ounce of prevention is worth a pound of cure.

It’s dispiriting to think that despite advancements in wine science and technology, a conservative estimate for flaws is 2-4%. It doesn’t sound much, but that’s billions of bottles, a level of product failure that would be unacceptable for many other industries. Consequently, the topic is hardly esoteric, and most wine drinkers will have encountered faults. The picture is further complicated because some flaws are becoming more widespread while others are decreasing. Furthermore, new defects are appearing thanks to pollution and climate change. Some of those are still little known but may pose significant challenges in future.

Meanwhile, tastes, preferences and fashions change, while new wine markets also emerge. These bring different expectations of wine style and quality. Only twenty years ago, the odours and flavours derived from Brettanomyces and Volatile Acidity were still considered desirable and an integral part of the wine. Indeed, the outstanding wines of yesteryear from Burgundy, Bordeaux, and more besides would now be unacceptable if still made in the same way.

Such faults have become anathema to those raised on clean wines, yet they can also be enjoyable and contribute to wine excellence if present in small amounts. Such flaws are perhaps more about them being in the wrong concentration, in the wrong place or wine, at the wrong time.

So one person’s wine heaven may be another’s hell. The late Serge Hochar of Château Musar once said, “I once produced a technically perfect wine, but it lacked the charms of imperfection**.”

In addition, according to the type of fault, different people have different sensitivity thresholds for both detection and tolerance. It’s one thing to perceive a flaw, another to identify it, and yet another to decide whether it adds or detracts. There’s an even higher threshold for outright rejection, say to ask for a refund or replacement. Are wine drinkers a tolerant bunch, or is it that we can’t always identify if a wine is inadequate? Or would we rather avoid conflict? One of the most significant issues faults cause besides the economic cost is reputational damage. But who’s reputation?

A Rogue’s Gallery of Defects

The book begins with a general overview of faults and flaws, followed by an excellent section on wine-tasting techniques. After this come chapters devoted to a comprehensive rogue’s gallery of defects. One of the critical points made about faults and flaws is that their number, permutations and incidence are far more than most people realise. Some of them include:

First up are the family of chemicals known as Haloanisoles, including the notorious and foul TCA, for which there is no cure. Most will understand that corks have been a significant source of contamination in wine. However, it’s eye-opening to find that Haloanisoles are also widespread in the pharmaceutical industry and food and other beverages such as beer, coffee and even tap water!

Following on comes Brettanomyces, the funky yeast. It’s been around since winemaking began but was first identified at the Carlsberg brewery in Copenhagen and is often a vital flavour component in beer. As we’ve seen, Brett is often linked with VA and divides wine communities like no other. For some, these offer a dimension of complexity and contribute to some of the world’s most outstanding wines. In contrast, for others, they are only indicative of dirty winemaking and blot out varietal character.

After those, continue with one of the most common wine faults, oxidation. Next, find out why oxygen can be both the winemaker’s friend and enemy. Then things get stinky with an excellent treatise on VSC’s, including sections on screwcap faults (they are not perfect) and my current favourite, Lightstrike.

Atypical Ageing (ATA) is hardly known but is a growing problem with young white and rosé wines that look, smell and taste well past it. It’s created by vineyard stress in hot years, becoming more common thanks to climate change. Meanwhile, Smoke Taint, caused by vast forest fires, is already a huge problem, especially in California, South Africa, and Australia.

Who Should Read This Book?

Has drinking a glass of wine, good or bad, ever provoked the question, “why does it taste like that”? If so, this book is for you.

For wine lovers, this book offers additional insights for enjoying and understanding wine. As a wine taster, wine writer, and wine judge, it’s beneficial in diagnosing and explaining root causes. Sommeliers will find it indispensable for similar reasons. Finally, it should be essential reading for winegrowers, winemakers and anyone involved in wine quality control.

Some prior knowledge of wine-growing processes is assumed when reading the book. If you need to brush up on that, then refer to the award-winning book by Keith Grainger and Hazel Tattersall, entitled Wine Production and Quality.

I read this book avidly from cover to cover. I’ll dip into it for future reference as required, which is how many will employ it. Meanwhile, I learned a great deal, and it now influences how I think about wine evaluation.

I commend this excellent new book to you. Consider it an investment.

*Disclosure: I have known Keith Grainger as a respected colleague for many years. We are both members of the Association of Wine Educators and the Circle of Wine Writers.

**I can’t resist repeating this quote from Château Musar, and there’s also a reference to my article made in Chapter 7 (pages 259 and 282).