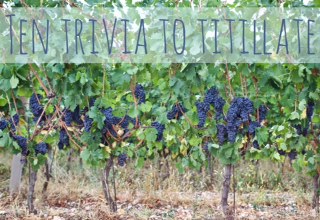 Here are ten examples of wine trivia, fun facts about wine worth sharing, ranging from the sublime to the ridiculous.

1. A Cork Oak tree needs to grow for 25 years before the first harvest. After that, harvests are every ten years. it means each tree can be harvested about ten times during its lifetime.

2. Esgana Cão is a Portuguese white grape. Its name translates as “Dog-strangler.” Ask for that in a wine bar near you.

5. The Founding Fathers of the United States of America certainly knew how to enjoy themselves. The bill for the party celebrating their final drafting of the US Constitution in 1787 showed that 55 people enjoyed:
54 bottles of Madeira
60 bottles of Claret
8 bottles of Whisky
22 bottles of Port
8 bottles of Cider
12 Beers
7 full punchbowls “large enough so that Ducks could swim in them.” What about beer?

6. The Poet Laureate receives a barrel of Sherry (720 bottles) from the monarchy each year in part payment for compositions rendered, a tradition that dates back to James I in 1619. Carol Ann Duffy’s first cask was a Manzanilla. Her poem, “At Jerez” is printed on the back label of each bottle. See my article here.

7. JD Weatherspoon is the official record-holder for the world’s biggest wine tasting. They persuaded 17,540 people to taste a free glass of Fetzer Coldwater Creek simultaneously across its chain of UK pubs in May 2008. Please, never venture there.

9. The late Madame Lily Bollinger was once asked by a journalist when she drank Champagne. She replied, “I drink it when I’m happy and when I’m sad. Sometimes I drink it when I’m alone. When I have company, I consider it obligatory. I trifle with it if I’m not hungry and drink it when I am. Otherwise, I never touch it – unless I’m thirsty”.

10. Cartridge ink for your inkjet printer is far more expensive than top vintage Champagne. A well-known brand of ink is £29.00 for 17ml, compared to a bottle of Dom Perignon 2006 at £90.00. An equivalent wine bottle full of ink would cost £1,275. Ink doesn’t taste good and probably lasts less time than the Champagne.

I’ll publish some more random trivia another time. Let me know if you have trivia to share! If you’ve ever wondered what I do, then this will give you an insight.

There’s another piece on Wine Wit and Wisdom here.