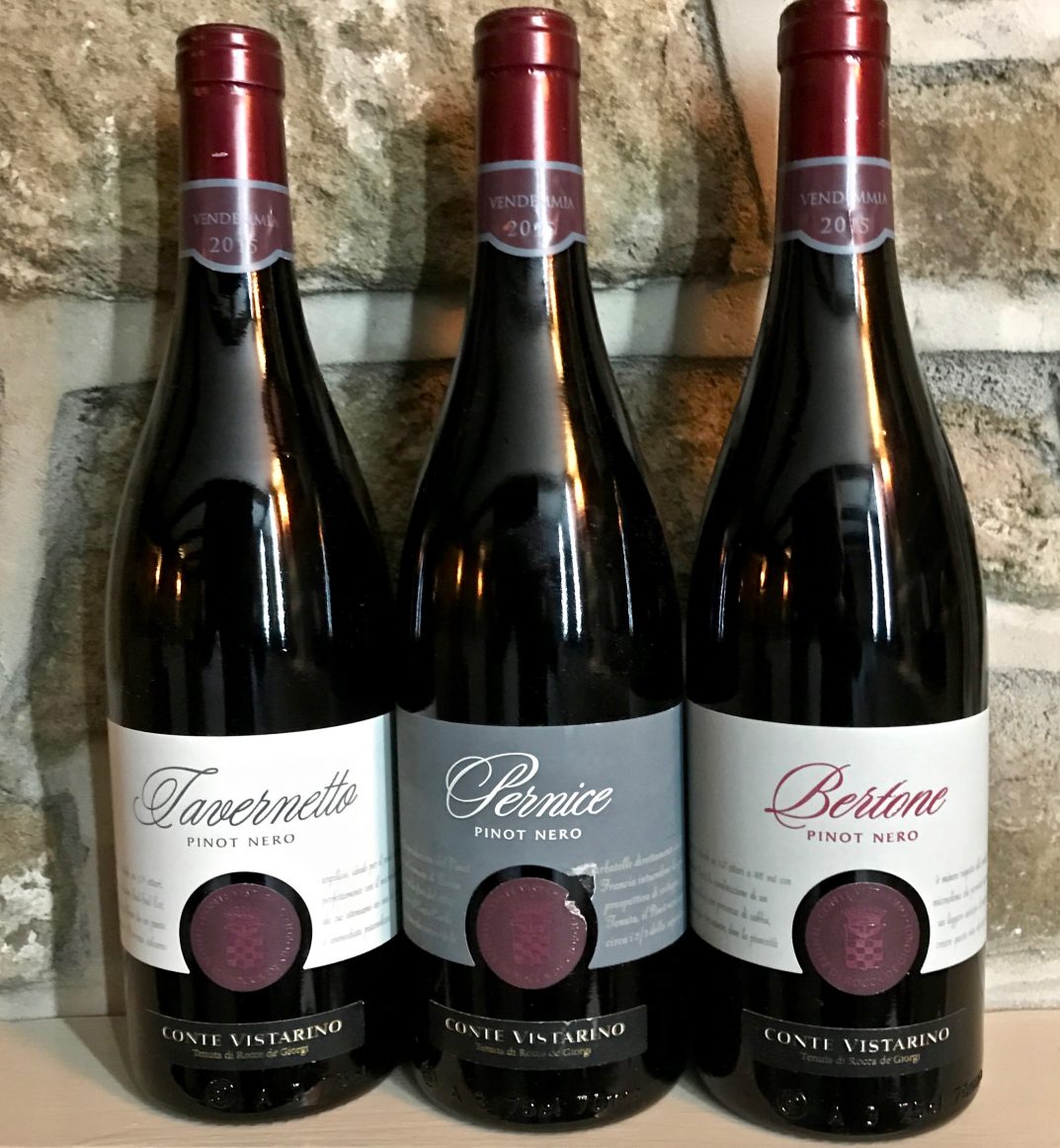 When you think of Pinot Noir, the chances are that you won’t be thinking about Italy. Of course, Italy has its own great native red grape varieties, while the spiritual home of Pinot Noir is in Burgundy. However, in Lombardy, Conte Vistarino has long been a Pinot Pioneer.

In Italy, Pinot Noir is called Pinot Nero. Sadly, it’s often considered an ugly duckling rather than a swan.

Italy has around 5,000 hectares of Pinot Nero, with 60% of this in Lombardy. In Lombardy, it’s primarily used in high quality sparkling wine production, just like in Champagne. Within Lombardy, there are two areas for this, one being the small Franciacorta DOCG, the other the much larger Oltrepò Pavese.

Indeed, Oltrepò Pavese has nearly 3,000 hectares of Pinot Nero, so in one sense it’s the Italian homeland. To put that in context, this is the equivalent of about a third of the Pinot Noir area of Burgundy and a little more than that grown in New Zealand’s Marlborough region.

The Oltrepò Pavese name means “beyond the River Po in the Pavia region.” It’s a vast triangular-shaped wine producing area in southern Lombardy. Bordering Piemonte, Liguria and Emilia-Romagna, it’s only 30 km from Pavia and 60 km from Milan. Winegrowing here goes back 3,000 years, yet this wine region isn’t well known internationally.

For many years, this area, as with many other Italian regions, sacrificed quality for quantity. Also, a good deal of its Pinot Nero is still sold off in bulk to sparkling winemakers elsewhere in Italy. There’s also a wide variety of white and red grape varieties grown beside Pinot Nero, made into every conceivable wine style.

The Oltrepò Pavese sits on the 45th parallel, where an ocean of rolling hills rises steadily southwards to the Apennine mountains. The soils are rich in lime and clay, and there are long sunny days with plenty of diurnal temperature variation. All this makes it eminently suitable for winegrowing. Now, this unspoiled area is steadily improving in quality and searching for a clear identity. The prime candidates for exceptional wines are those Pinot Nero DOCG Spumante sparklers, but also still red Pinot Nero wines.

Conte Vistarino is an enormous and historical 826-hectare estate in the district of Rocca de’ Georgi in Oltrepò Pavese. Inherited by Giorgi di Vistarino in 1629, it’s remained in the hands of this family ever since.

At the heart of this estate, the family built a magnificent stately home in the 18th century called Villa Fornace. Nearby is Rocca de’ Georgi, a ruined medieval fortress, from whence the surrounding area gets its name.

The estate includes 200 hectares of acacia and oak woodland, 120 ha of arable land and 160 ha of vineyards. 140 ha are devoted to Pinot Nero, grown for both sparkling and still red wines. As is typical in this area, there are many other grape varieties grown, so the remaining 40 ha of vines here consist of Riesling Renano, Pinot Grigio, Chardonnay, Moscato, Barbera, Cabernet Sauvignon, Croatina and Uva Rara. Conte Vistarino makes some 400,000 bottles each year and has more than 20 different wines available.

Conte Vistarino was responsible for bringing Pinot Nero to the Oltrepò Pavese. In 1850, Augusto Carlo Giorgi di Vistarino planted imported Pinot Noir clones from Burgundy. He was the first person to do so in Oltrepò Pavese and then, in 1865, also became the first to make spumante. So suited were these non-native vines to the local terroir that other producers followed his example.

Unsurprisingly, the flagship of the Conte Vistarino sparkling wine portfolio is called “1865”, a Pinot Nero Método Classico Brut DOCG. It’s given a minimum of 60 months ageing in the bottle and is rated Tre Bicchieri by Gambero Rosso.

Ottavia Giorgi di Vistarino runs Conte Vistarino today. With a Master’s degree in winemaking and viticulture, she has become a leading winegrowing figure, championing wine excellence in the Oltrepò Pavese and takes part in the Italian Women in Wine movement. 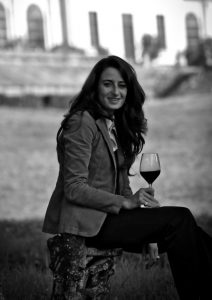 Ottavia Giorgi di Vistarino with a glass of Pinot Nero

As a result, there are three Cru wines, all 100% Pinot Nero. These are Tavernetto, Pernice and Bertone.

All three wines are Provincia di Pavia IGT. A humble designation, but make no mistake; these are Grand Cru wines. They are all made similarly, so the principle differences between them are down to the specific terroir of each vineyard site. How very Burgundian! All three feature hand-picked grapes and low-temperature fermentation in stainless steel. They have 24 months maturation; 12 months in French oak barriques and then 12 months in the bottle.

Without further ado, here they are. All are from 2015, the latest release, and all are 14% abv. Being young wines, they were all decanted for an hour first. 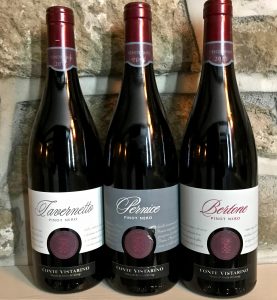 The Tavernetto Cru is at 325 metres altitude. It has an east facing aspect, so it’s a drier and cooler site.  Soils are calcareous clay with silt.  Ruby-coloured, Tavernetto has a scent of rose and strawberry. The juicy red hedgerow fruit has an earthy minerality that shows on a persistent finish.  Cellar Door Wines  £24.95.

Pernice Cru is a 3.5 ha plot, again at 325 metres altitude, though with a different aspect, facing south/southeast. It’s warmer and wetter, with calcareous clay soil. Pernice means Partridge, of which there are many in residence.

Ruby/Garnet coloured, a shade deeper than Tavernetto, Pernice is the most elegant expression of these three Cru. Less aromatic, with a densely textured palate. Strawberries and cassis fruit with silky-smooth tannins before balsamic and saline notes on the long finish.

It’s a Gambero Rosso Tre Bicchieri award winner. Meanwhile, a 2013 bottle of Pernice had the benefit of extra bottle age, so was more aromatic and nuanced, showing herbs, tobacco and forest floor on the nose and palate. The Italine Wine, £36.20

The highest plot, at 400 metres altitude, with a west/southwest aspect. The Calcareous clay soil here also contains stones and sand, so is more free-draining. There’s a sharper contrast between day and night temperatures too. Unlike Tavernetto and Pernice, this cuvée has 10% whole bunches in fermentation, which shows as a little extra tannic texture. Not quite as elegant as Pernice, (at least at this young stage) but with a higher acidity that seems to make it slightly more vibrant. That balsamic note is again present on the finish. Of the three, Bertone probably is the wine that needs more time to show its best. Awarded Tre Bicchieri. The Italian Wine £35.90

Just like with any fine Burgundy, with these wines, I’d recommend game and game birds, terrines, and roast meats, especially lamb. For those looking for a match with local Italian cuisine, try Pavia rice Risotto with mushrooms, or the classic Osso Buco.

All three wines are brilliant expressions, reflecting their terroirs and drinking now. However, being young wines, they will improve, say over the next five years and will easily keep for ten. Useful then that the UK stockists have 2013, which on the evidence of Pernice, have more development. It’s difficult to decide a preference, but if pushed I’d choose the Pernice at this stage. Your mileage, as they say, may vary. And I’d like to try examples with more bottle age too.

These wines will impress Burgundy lovers. But there again, Italian wine lovers should seek them out too. They are recognisably Pinot Noir in character, with finesse and elegance, yet there’s a subtle Italian dimension. They prove that Pinot Nero in Italy can make great red wine.

Indeed, these expressions stand easily with their Pinot peers from New Zealand, South Africa, Chile, the USA and Germany as well as from Burgundy itself. I can think of no higher praise. These Italian Pinot Nero’s come highly recommended! 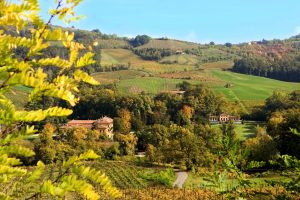