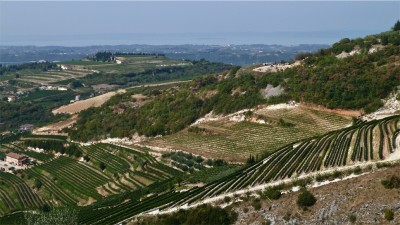 I visited Villa Monteleone on a hot spring day infused with the smell of Jasmine. We sat in the shade of an ancient Cherry tree tasting the wines with owner Lucia Duran Raimondi. Magic was in the air.

Villa Monteleone is in the most western part of the Valpolicella Classico zone in northern Italy, found within the hamlet of Gargagnago. The villa dates from the end of the 1600’s and gives panoramic views over seven hectares of vines interlaced with groves of Olive and Cherry trees.

From the viewpoint at the top of the hill, you can spy the river Adige and Lago Garda to the west. To the north are old quarries hewn from the ever-rising hills. The magnificent and romantic city of Verona is less than ten miles away.

Vineyards have been here since Roman times, and their terraces define the landscape, with pergola’s bursting with ripening red grapes. Gargagnago was also home to the poet Dante. Yes, that Dante – The Divine Comedy and all that. One line from him sums up the joys of this place:

“look at the sun’s heat that becomes wine when combined with the juice that flows from the vine”.

The story of Villa Monteleone is a very personal one. In August 1988, Lucia and her husband Dr Anthony Raimondi made their home at Villa Monteleone. He had recently retired, after a distinguished career in Chicago as a Neurosurgeon and Professor. He returned to Italy to explore his heritage, and in particular, to make the wines of Valpolicella. Lucia, Columbian by birth, is an adopted American.

Their first harvest was in 1989; wine made principally for friends and family. Helped by oenologist Federico Giotto, their first commercial vintage was in 1991. Today, Villa Monteleone makes just 35,000 bottles each year in all four Valpolicella styles: Classico, Ripasso, Amarone, and Recioto. They wanted to make authentic wine using only the native grapes of Valpolicella; Corvina, Corvinone, Croatina, Molinara, and Rondinella. The wines are stunning.

However, Anthony suddenly passed away. It left Lucia as a foreign woman that spoke little Italian and without much winegrowing experience. With local help, she rose to those daunting challenges and mastered them. That shows her strength of character and keen intelligence, and I swear you can taste her personality in the wines.

While the Ripasso, Amarone, and Recioto are all stunning, my favourite was Campo Santa Lena, the Valpolicella Classico.  This basic style of Valpolicella can be disappointingly thin and vapid when winemakers reserve the best grapes only for Amarone, which commands a premium price. But that isn’t the case here, the “normale” gets as much care as the premium wines, reflecting both terroir and Lucia’s guiding hand.

Meanwhile, in the small cramped cellar, dry ice keeps the grapes cool before fermentation begins. This is a straightforward and practical solution in hot harvest weather. The grapes ferment in stainless steel tanks, preserving the volatile aromatics. Afterwards, the wine is matured for six months in steel tanks and a further six months in the bottle, so there is no oak to mark it. The blend is usually 65% Corvina, 10% Molinara, 15% Rondinella, and 10% Croatina.

Hence, Campo Santa Lena is a dark ruby colour, and a fresh cherry and violet character shines through. Polished tannins contribute to the harmonious balance of fruit, moderate alcohol (12.5%) and mouthwatering acidity. A classic bitter almond finish makes you come back for more. Made to drink when young, this vibrant wine opens up to reveal blackcurrant and herbal complexity and will give pleasure over the next 3 to 4 years.

For me, little beats this wine for enjoyment with pasta dishes. Especially those with meat and tomato sauces.

Campo Santa Lena is an excellent introduction, both to Valpolicella and the wines of Villa Monteleone. There are a Ripasso and two Amarone’s, including a Riserva, plus a delightful sweet Recioto.

Campo Santa Lena is available in the UK from The Cardinals Cellar in Oxford at £12.99.

Try comparing Campo Santa Lena with the Valpolicella from Ca La Bionda. Both are terrific, but different due to different terroir.