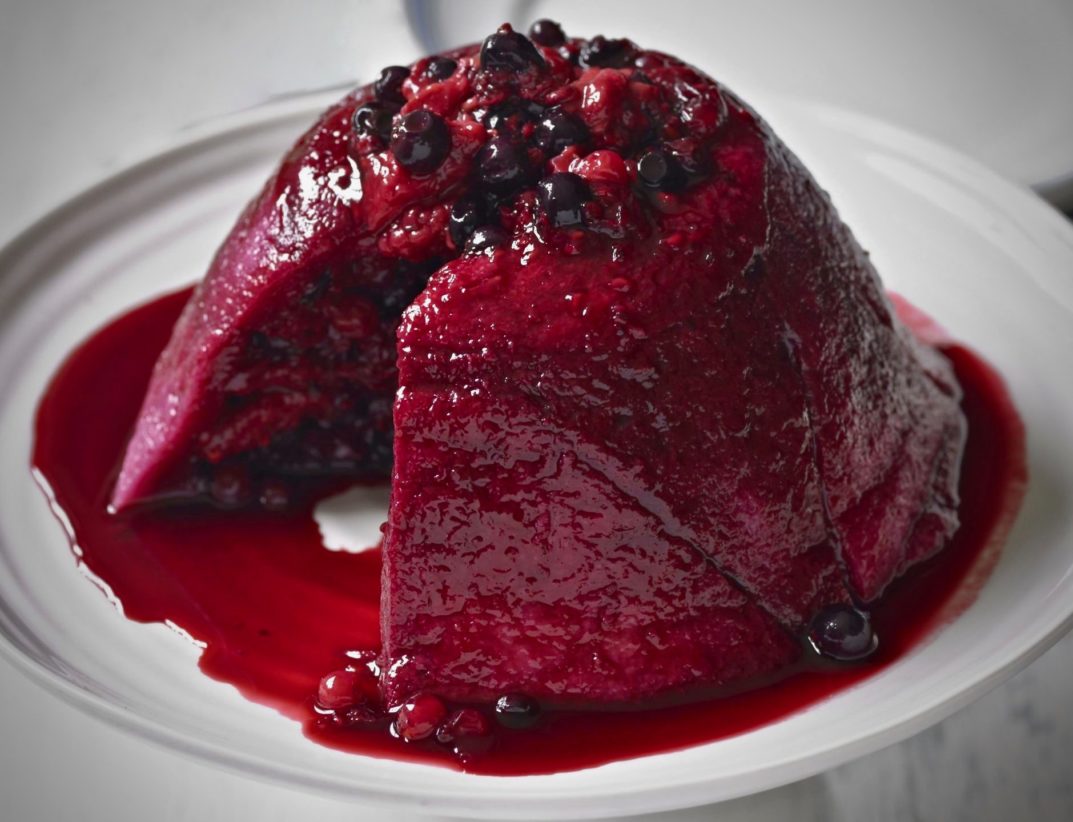 Summer Pudding is a classic dessert for the British summer. Here’s a super-easy recipe that makes a Summer Pudding serving six, inspired by Jane Grigson’s Fruit Book – which is a great read.

Redcurrants and Blackcurrants are the two essential soft fruits for Summer Pudding. If you have a handful of Whitecurrants, Loganberries, Raspberries, Tayberries or Mulberries, then lucky you – use those too. I also add some Alpine Strawberries and Blueberries. Note this recipe doesn’t include regular strawberries, but there’s nothing to stop you from using them if you chop them up. Blackberries are a possibility too, but I’d argue they’re autumn rather than summer fruits.

A 1-litre pudding basin, lightly buttered inside, and a small saucer that fits neatly inside. Plus a 1.5 -2 Kg weight

The fruit ratios don’t need to be too exact, but you should probably include more redcurrants than anything else.

Ensure that all the berries have been destalked. Then rinse them under cold water in a colander. Put them in a large saucepan with two-thirds of the caster sugar, but keep a few separate for final decoration. Cook them in the saucepan on low heat for about 4-6 minutes until the sugar has dissolved and the fruit has burst open, allowing the juices to run – but don’t overcook them because it will spoil the fresh flavour. Take them off the heat and add more sugar to taste; you may prefer a slight tartness. If you have any cassis, then optionally add a tablespoon.

Now for the bread. Please don’t use industrial white slop; because things really won’t turn out well (if you pardon the pun). Instead, use a good white loaf that’s at least a day old. If the bread is slightly stale, that’s all the better to soak those fruit juices up and add some solidity.

Slice the bread into half-inch thick strips but don’t include any crust. Some advocate that slicing into triangles adds some structural strength, you decide. Butter the inside of the pudding basin and then line it with the slices of bread, overlapping them and sealing well by pressing the edges together. Fill in any gaps; otherwise, the juice will get through when you add the fruit. The butter is there to seal the bread layer and grease the basin so you can turn the pudding out onto a dish later on.

Pour the fruit and juice in, retaining two-thirds of a cupful of juice for serving later on. Now cover the pudding with bread slices to form a lid (or make a lid from a circular piece of bread)

Place the saucer on top with the weight to press the Summer Pudding down. Refrigerate for at least four hours, preferably overnight. The fruit juices will seep into the bread and turn it into a lovely shade of scarlet.

Turn the pudding out onto a large dish. Then spoon the reserved juice all over to soak into any bits of bread that still look white. Stick the fresh berries on top for decoration.

Brut style NV Champagne or English Sparkling wine works surprisingly well, as, of course, does Brut Rosé. However, Pol Roger Rich, a sweeter demi-sec Champagne, is a brilliant first choice if you want to be decadent. If you don’t want to run to that, then alternatively, a Moscato d’Asti DOCG will be great too. For example, a half bottle of Michele Chiarlo Nivole is widely available in the UK for under a tenner.