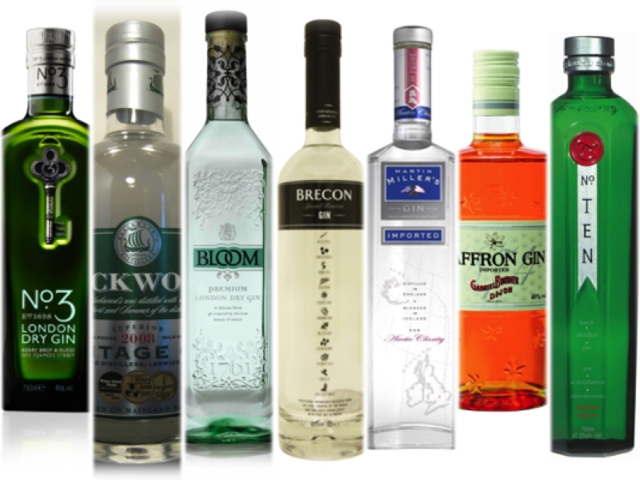 Part 1 covered the history and renaissance of Premium Gin. Now for the Gin reviews.

Gin says something about you

Premium Gin is about three elements that should combine to create a great and memorable drink. The botanical ingredients, painstaking artisanal production, and an exquisite presentation because the style is crucial for maximum enjoyment.

Spirits and cocktails always say something about you, so make sure they say something flattering. All these examples are readily available. I’ve tried to go for contrasts in style rather than just pick the “best”. What suits me might not suit you. I’ve tabulated the Gin reviews at the end.

Gin is so versatile for mixologists. Hence all were served blind in three different ways. First, drunk neat over ice to explore its character. Second, mixed with tonic as a classic G&T. Finally as a Dry Martini, stirred, not shaken, with a hint of vermouth and obligatory olive.  Mathematicians will spot this means 21 different drinks, so this wasn’t an activity to be rushed!

Mathematicians will spot this means 21 different drinks, so this wasn’t an activity to be rushed!

Quality mixers are also essential. Mass market brands of tonic water are gloopy sweet, either from sugar or aspartame, drowning out any subtlety. I used Fever Tree throughout; you could also try Fentimans or Q.

For the Vermouth needed for the Dry Martini, I waved a bottle of Noilly Prat around, which did the trick. Martini & Rossi or Boissiere are good alternatives.

The ratio of Gin to mixers was kept constant, with all drinks served in identical glasses.

This is my house Gin at BD Mansions. It comes in a smart apothecary-like bottle with a stopper, emphasising the Scottish island of Shetland. However, distillation has now moved over to the mainland since the brand was taken over by Blavod. It uses sustainable hand-harvested botanicals from the Shetland sea-cliffs, all gathered in one year. Hence, the vintage stated is really about the botanical character of one year, not ageing. These include bog-myrtle, wild water mint, sea pink, meadow-sweet, angelica root, cinnamon, liquorice, coriander, citrus peel, orris, violets and turmeric.

Taken neat, this is a bright, medium bodied spirit with explosive citrus and herbaceous notes and a floral nose. Individualistic and elegant, good smooth texture and relatively subdued juniper. Splendid as a G&T; crisp, subtle and satisfying, light and refreshing. It has an ethereal quality which is slightly less successful when presented as a Dry Martini. I prefer something more muscular.

On the rocks, juniper is much more prominent, alongside scented lemons. On the palate, orange notes reveal quickly before woody undertones and a hint of sweetness. It’s a revelation as an excellent G&T, which draws out the cinnamon and nutmeg against a steely background. Distiller Gillian Macdonald has created a unique spirit. It’s too sweet for the ultimate Dry Martini but ideal as classic G&T.

Made in Dijon by an independent Cassis maker. Unusually, it features hyper-expensive saffron as a primary botanical. This expensive proposition will polarise Gin drinkers. For a start, it is an orange-amber colour, imparted by the saffron, not by the colour of the bottle.

As an aside I can recall how disappointed I was when I found Bombay Sapphire wasn’t blue. But that’s another story.

Saffron was launched on an unsuspecting world in 2006 based on an ancient recipe. Other botanicals stated on the bottle include coriander, lemon, orange, angelica seeds, fennel, and iris.

Drunk neat, this is all orange bitters. So much so I thought it could be Cointreau although fennel and citrus do finally appear. Unctuous and very sweet, reminiscent of the Old Tom style. I didn’t expect it to work with tonic as a G&T but in the tonic seemed to open it up and reduce the orange flavour. I can’t recommend it for a Dry Martini, though, being sweet and orange flavoured it clashed with the Vermouth. It’s Gin, Jim. But not as we know it. Purists will avoid, though mixologists with sweet cocktails may deliver more favourable results. It’s certainly different! Try before you buy.

Named for their legendary abode in St. James in London, BBR No.3 wears its 300-year-old tradition proudly. It’s a thoroughly London Dry style, though made in ancient copper stills in Holland. The green bottle sums it up. Tradition meets style; a door key motif and 1698 proudly proclaimed. There are relatively few botanicals admitted to. Whether there are more than orange and grapefruit peels, angelica root, coriander and cardamom are unknown.

This gin does live up to classic status and that higher alcohol level helps. Taken neat there is the expected juniper background, but there are subtlety and complexity galore. A smooth and viscous mouthful, it never cloys, being very dry and with a citric kick on a long fade. One to sip slowly and in contemplation. As a G&T it is very satisfying and classic, the Tonic brings out cardamom. Best though in a Dry Martini, a perfect marriage of texture and bitter flavour. James Bond would drink this. “Do you expect me to talk? No, Mr Bond, I expect you to die!” Worth every penny. My new favourite.

Martin Miller’s was established only in 1999. He wanted to create a modern classic fine gin from scratch with the best ingredients. He has succeeded admirably, so leading the gin renaissance from the front. A Gin distilled at Langley, near Birmingham, in batches from an old copper still called Angela. The heads and tails are discarded, in a similar way to whisky. Hence it uses only the heart of the distillation. It’s a London Dry style, with Florentine iris, cassia bark, liquorice root, citrus peels and coriander. The unique point is the clarity offered by the water used. It’s imported from Iceland, as the angular bottle proudly proclaims.

On its own, it is ice-clear and smells very clean, almost green. That made me wonder if there was cucumber included in the botanicals (I checked afterwards and yes there is). The palate is dry, soft and rooty rather than floral or fruity. It isn’t going for complexity, rather purity, which makes it an ideal mixologist companion. As a G&T there is real lift and crispness, with a slightly smoky edge, making it refreshing, as it should be. As a Dry Martini, it majors on elegance and a piercing classic finish. Easy to recommend textbook gin. PS, just pour it over lemon sorbet for a classic and highly alcoholic dessert.

This is a gin made in the London Dry style by Greenall’s in Warrington, one of England’s biggest distilleries. Bloom, however, is a relative newcomer on the scene. It comes in a delicate cork-stoppered pale-green bottle covered in tracery. Visually it suggests the Bloomsbury set, with Virginia Woolf and Vita Sackville-West gently gliding around the gardens at Sissinghurst.

Fanciful? This gin certainly majors on the floral and is perfumed. It is delicate and filigreed. Drunk neat, it is wafting and delicate. There is a cast-list of unusual botanicals that include chamomile, pomelo (Chinese grapefruit) and honeysuckle. Soft and with a slightly sweet edge, the juniper is hardly noticeable and I enjoyed it most neat. As a G&T, it offers a lightweight summery drink redolent of rosewater and white flowers but I seemed to need a higher gin to tonic ratio than with some others. As a Dry Martini, it lacks punch and is overly polite. Distiller Joanne Moore certainly has created something distinctive. Perhaps a little too mannered though it should make plenty of new friends that are not traditional gin drinkers.

Tanqueray is the true Bloomsbury Distillery was founded by Charles Tanqueray in 1830. However, it was destroyed during the second world war and the company moved to Scotland. Tanqueray launched this in 2000. It’s named after the still, called Tiny Ten, near Edinburgh. No botanicals are given on the super-elegant green bottle. It’s a super-smooth high-strength Gin that majors on citrus and juniper.

Drunk neat, it really is a full-on grapefruit fest, really tangy, smooth but with balance and a viscous texture. Adding tonic brings out floral notes and subdues the juniper, creating a deliciously full-bodied G&T that majors on citrus freshness and chamomile. Turns out Tanqueray use fresh whole citrus fruits rather than peels, with grapefruit, orange, lime and chamomile in the mix. It’s really versatile but shines best as a Dry Martini. It has a brawny character, a moreish, almost salty tang and a long dry bitter finish.  Subsequently adopted by a number of hip-hop stars, this is a high bling gin and none the worse for it.

All these are well worth your attention and there are many others I would willingly add to this list. The obvious omission from this line up include the superb Hendricks, Bombay Sapphire, and those Gins made in France by G’Vine.

Your choice will come down to a matter of taste, personality and how you prefer to drink it. Some are more versatile than others. Your budget plays a part too. Th price differences here are large, with the most expensive twice the price of the cheapest.

Why not try these out in bars before committing to a whole bottle?

What this comparative tasting reveals is that there’s a whole world of interesting flavours to explore in premium gin.

Do let me know your thoughts, I’m always looking out for new discoveries. Do you agree with me? Let me know!